If you’ve ever regretted not being able to play a musical instrument, your problem has been solved. The new Edelweiss piano is the first self-playing piano on the market with 400 pre-programmed pieces of music and thousands more available for download.

The instrument, which costs between £9,000 and £24,000 depending on the model, has an iPad built into a hidden drawer and a self-playing mechanism allowing it to play along with pre-recorded tracks. It covers all genres, from classical to jazz, country, and pop. The accompaniments were recorded by a professional concert pianist, and an app has been designed which is capable of recreating their keystrokes and employing variations in timbre, tone, and nuance.

The Edelweiss piano is designed by a family that has been creating musical instruments for over four decades, and it has established a high reputation. Ross Norman, director of Edelweiss, said of the project, “Whether you play the piano or not, we hope to bring the joy of live music to living rooms everywhere. Once you listen, you’ll understand… Edelweiss is indistinguishable from a virtuoso piano concert performance!”

The piano is also playable in the standard way.

You can see the piano at work, playing a well-known piece by Andrea Bocelli, here. More information about their pianos is available on their website. 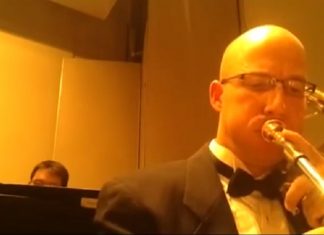 CMUSE - Mar 4, 2015
Flight of the Bumblebee by Nikolai Rimsky-Korsakov isn't an easy piece to master.  It's known for its frantic pace when played up to tempo,...

Minus The Bear brings back their “Lost Loves” on new B-side...