Simon Toyne has published an article arguing that there has been a precipitous decline in classical music coverage on mainstream television over recent years, and that on the rare occasions when it is given airtime, the kind of music performed leaves a lot to be desired.

Pointing out that classical performances led by Leonard Bernstein and Andre Previn in the past attracted millions of viewers, he contrasts this with the present situation where classical music has been “shunted” on to niche channels where the audiences are much smaller. “This is more than a shame,” he writes. “It is a travesty, and could have far-reaching consequences for our society.”

Toyne identifies two major problems caused by the lack of coverage. The first is the way in which classical music is being portrayed when it is screened. The last night of the Proms broadcasts are often full of sing-along performances or music conforming to the four-minute-long bitesized pieces normally associated with pop music. As a result, a false image of classical music is being created on the rare occasion when it is visible.

This feeds into the second problem, which in Toyne’s opinion is the impact in schools. School children are less likely to be exposed to classical music and therefore are not given the opportunity to experience its ability to change people’s lives. Only children lucky enough to have a musical connection through their family are being given that opportunity, meaning that the potential numbers of future players and audience members is smaller.

The best way to expand the audience for classical music has been and continues to be widely discussed. Toyne urges the media to take on a more proactive role in promoting classical music. He mentions the BBC’s Ten Pieces initiative as a positive step. But he also points to the lack of free musical tuition, which in the past enabled young people to learn an instrument.

There are those who maintain that classical music is destined to be forever the province of a small minority. By some, this is put down to a lack of interest among the population for classical music, while others, such as a poster in this forum, assert that classical music never enjoyed a broad fanbase in the past. Both of these positions seem to underestimate the power of the media and music industry to influence audiences. Another response to a discussion offers a more critical view, writing, “There’s no money in it: Not enough, anyhow. The money is in pumping out cookie-cutter tunes about banal topics that don’t make people think, dream or question anything. This way they get up and go to work the next day, raise their kids to work, and insist it’s all fair and free.”

These issues are not only relevant for television. Another major issue is the proliferation of online streaming services and the preference of many people to stream music rather than purchasing it. Streaming sites do pay labels based on the number of listens tracks get. The rates are, however, not only very low, but also geared towards the pop music industry in several important ways. For one thing, as this article points out, the fact that classical works are always longer than a pop song means that someone streaming Schubert will listen to a smaller number of pieces over the same period of time than another person clicking on Coldplay. This ultimately means less money is going to the classical music labels.

Then there’s the question of the metadata used by services like Spotify. Because there are so many people involved in a classical piece of music–the composer, the orchestra playing it, the conductor, soloists–not to mention many versions of the same work, finding specific recordings on a mainstream site can be difficult.

All of this presents a challenge to classical music getting coverage on the new media platforms where music is being listened to. The creation of streaming services suited specifically o classical music may prove a remedy to overcome the financing and searching challenges, but it can only be part of the solution in expanding the music’s popularity. 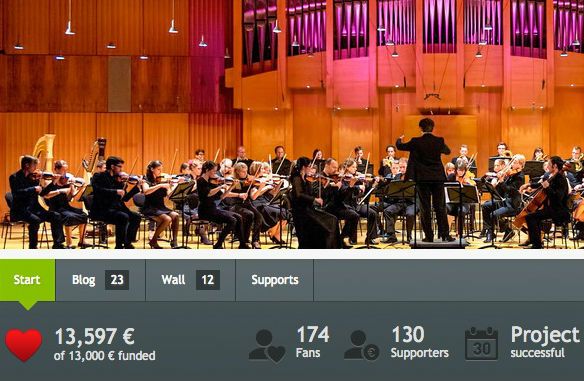 Does crowdfunding work for classical music?