Even if you are not completely familiar with the term ‘stride piano’ you may well have heard the performances of such notable jazz pianists as Thomas ‘Fats’ Waller, Earl Hines, Art Tatum and possibly James P Johnson. Each of these piano players amongst many others has come to be celebrated as being amongst the very best of the stride piano players.

The thing that strikes you when listening to these performers is often that there seems to be more than one pianist playing such is the complexity of the rendition. In some ways, this was the aim of the stride technique and in this article, I will look more closely at the technique and the work of these and other pianists.

To some extent, the advent of ragtime music heralded the style of stride piano playing with the characteristic left hand striding from bass to mid-range in the piano keyboard. Take a look at the works of the famous ragtime composer Scott Joplin and you’ll quickly spot the stride style in his music. Perhaps the fundamental difference between ragtime and what became established stride piano playing was the type of music that was played.

The stride player was not restricted to music only in the ragtime vein but far more orientated towards popular compositions of the day. Increasingly, the harmonic and rhythmic complexities of the stride pianist moved the music into a very different world to the age of ragtime.

Stride piano playing is on the face of it, quite a straight forward playing technique. It involves the left hand of the pianist literally ‘striding’ from the low range to the mid-range of the piano. The desired effect is to create a bass line plus an on-going chord pattern with one hand. This technique was largely born out of pure need and economy. If the pianist could play the bass line chords and the melody, you do not need additional musicians.

The bass note normally lands on the first and third beats of a four-four bar with the chord arriving on the second and fourth beats respectively. This then leaves the right hand of the pianist to play the melody, or other more intricate chords or melodic lines. Below is a short example of one of the many ways that stride piano can be realised by a pianist. 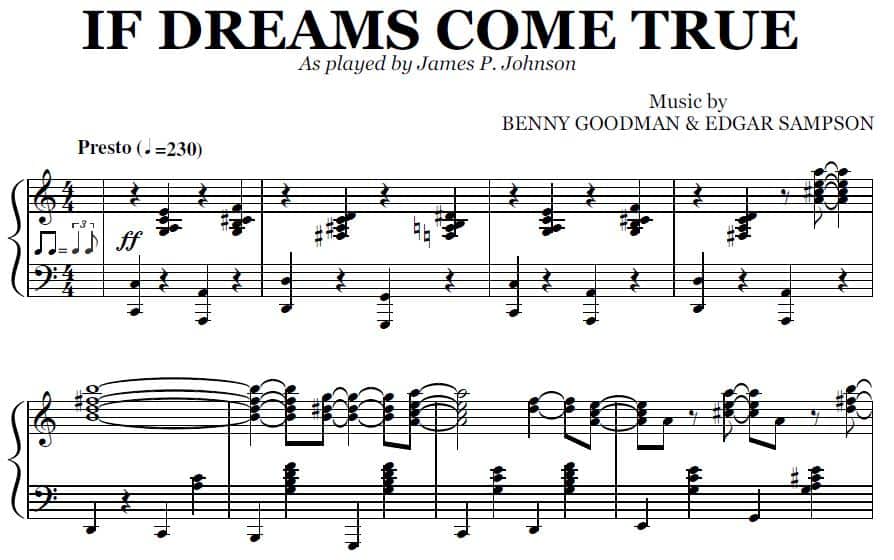 It sounds simple enough but there are more aspects to consider. For many stride players, a single bass note and chord are not the preferred choice of delivery. Instead, pianists like James P Johnson and Art Tatum often play an octave or even a tenth (for example C to an E 9 notes higher), followed by a three, four or five-note chord on the next beat. This is still an approachable challenge if tackled systematically but what you hear on many recordings of stride playing is the tremendous speed of performance.

If you refer to the above example, you can see the tempo is indicated at an extremely fast 230 beats per minute. Even the most accomplished piano player is going to find this a notable challenge. If you listen to Art Tatum performing stride pieces it is even more bewildering as he can not only deliver pinpoint accuracy at very high speeds but also add complex right-hand melodies and even left-hand counter-melodies with his thumb.

The world of the stride pianist was a complete jazz style in its own right. From the ragtime of New Orleans, Jazz headed north to take root in New York and Chicago. It was here that stride truly began to flourish. Many consider that the stride method of playing comes from a fusion of the popular Blues and ragtime. Stride evolved in the brothels and nightclubs of Harlem cultivated by extraordinary artists and innovators as Willie Smith, Luckey Roberts and of course James P Johnson.

As the Blues flowed into the white culture of New York the once black only ghettos of the city became popular venues for white people too. This meant that many of the established black musicians turned their attention to catering more for the taste of the white audiences with the positive result that by the end of World War Two, stride had found its place in musical history.

Rent parties also became an important aspect of this change and mix of cultures. Given the often extreme poverty in which many of these stride pianists lived, finding the money to pay rent was not always possible. What they cleverly devised were rent parties that were according to some sources riotous occasions that sometimes resulted in fights and arrests but ultimately were there to raise the funds for the musicians and their families to be able to live from one week to another.

Throughout musical history, the idea of competitions for prowess or money were not uncommon. There are many accounts of JS Bach accepting musical challenges from any number of fellow composers and performers from Buxtehude to Marchand. The challenge would often be relating to the respective composers’ skills of improvisation or playing in a certain style current at the time.

Stride pianists had similar musical challenges called ‘cutting contests’. These contests popular between the 1920s and 1940s were largely about showing off improvisational skills and in some cases in an attempt to steal another pianists’ job. This somewhat unpleasant situation led to the use of this phrase, still used today amongst jazz musicians in a droll way, to mark one musician’s superiority over another’s.

To fully appreciate the colourful range of stride styles listening is essential. Many of these pieces have been painstakingly transcribed by jazz enthusiasts so that more pianists can master the stride style. In many ways you could argue that this is not in keeping with the jazz genre at all as a great many of these stride pianists were not formally trained, nor read sheet music; everything they did was ‘by ear’.

James P Johnson pieces to investigate would be the ‘Steeplechase Rag’, ‘Weeping Blues’ and the duet with Fats Waller ‘Feeling Blue’. For Fats Waller himself, the list is huge as he was perhaps the most successful commercial stride player of the era. ‘A Handful of Keys’ is a good starting point. Likewise, ‘Honeysuckle Rose’, ‘Ain’t Misbehavin’’ and ‘The Joint is Jumpin’’. ‘Tiger Rag’ and ‘Tea for Two’ are essential listing for Art Tatum fans.