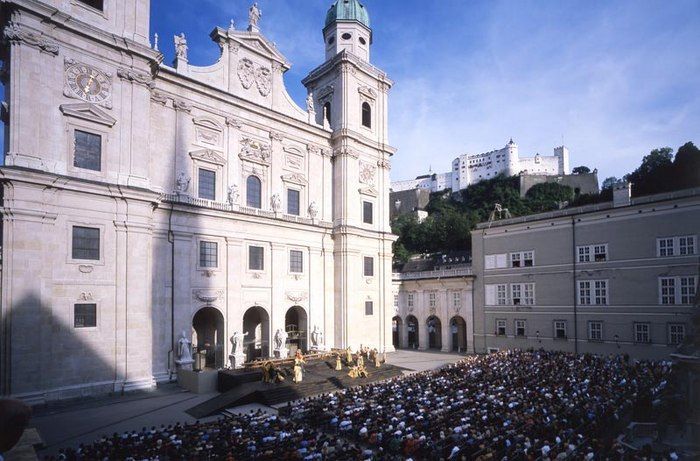 The tradition of the Salzburg Festival began August 22, 1920 with the premiere of the morality play, Jedermann by Viennese playwright, Hugo von Hofmannsthal, on the Domplatz or Cathedral Square. However, the history of performing arts as part of the city’s cultural life go back to the Middle Ages when Biblical stories were acted out in the form of mystery plays. Religious festivals and sacred music concerts were held in the Salzburg Cathedral; secular plays and musicals with dialogue called singspiels were performed at the Salzburg University.

After the 1842 unveiling of Ludwig Schwanthaler’s sculpture of Salzburg’s own Wolfgang Amadeus Mozart, discussions arose for annual scheduled festivals of Mozart’s music. In 1877, the Vienna Philharmonic first performed at the festival at the invitation of the International Mozart Foundation. This event was the orchestra’s first performance outside of Vienna. In 1876, the Bayreuth Festival opened in Germany. Its success prompted suggestions that the annual Mozart festivals should follow the Bayreuth model.

As World War I was coming to an end, discussions over an annual festival in Salzburg resumed with more determination than ever before. Hermann Bahr, the writer and playwright, and Max Reinhardt, the actor and director, fully supported holding a yearly festival as well as building a festival hall. The Salzburg Festival Society or Salzburg Festspielhaus-Gemeinde was formed in 1917 to raise funds for the project. Reinhardt proposed building a festival house on the property of Hellbrunn Palace or Schloss Hellbrunn. He also bought Schloss Leopoldskron in 1918 and, after years of renovation, the palace was ready for theatrical and formal events.

With financial support and venue preparation moving forward, Hofmannsthal published a proposed festival program draft in 1919. He included Jedermann, which was his 1911 adaptation of the 15th-century English morality play, Everyman. Reinhardt directed the production. The play focused on the choices and temptations a person encounters in life and the consequences of those decisions.

The first Salzburg Festival took place August 22-26, 1920. It started off with the play that connected the past and present by acknowledging the types of plays during the Middle Ages, and the 20th-century contemporaries who brought the festival to life. Jedermann was so successful that the festival was quickly established as an Austrian and international tradition. Reinhardt and Hofmannsthal were joined by Richard Strauss, composer, Franz Schalk, conductor, and Alfred Roller, stage designer, in their commitment to continuing the Salzburg Festival as an annual event.

The length of the festival expanded to almost the entire month of August in 1921. In addition to Hofmannsthal’s play, the program included orchestral, chamber, and sacred music concerts. The first operas, all by Mozart, were performed at the event in 1922 with artists from the Vienna State Opera. That was also the first time the Vienna Philharmonic performed as part of the Salzburg Festival.

The decade of the 1920s saw the Salzburg Festival grow to international stature even when facing budget difficulties. In 1923, the program cut back to only a single production with four performances, and there was no festival at all in 1924. The rest of the decade, Jedermann or any of Mozart’s operas were part of the program.

Hofmannsthal died July 15, 1929. He had been instrumental in the festival’s success. It went on as scheduled that year from August 4-30 and had its first world premiere in the concert series: Stabat mater by Peter Cornelius. The Salzburg Festival would face more challenges but it had survived its first decade.

D Grant Smith - Oct 6, 2015
It only takes one line to peg the voice of Chris Cornell. The same can be said for Prince. Ironic enough that Cornell has taken his...