The St. Louis Symphony, the second oldest symphonic orchestra in the United States, will begin its 136th season, Sept. 18, 2015, at its home base of Powell Hall in St. Louis, MO. The orchestra was founded in 1880 by the Dutch conductor, Joseph Otten.

Its prestigious history has included international guest artists, choruses, a youth orchestra, community outreach, and educational programs for school children. This article looks at some of the major changes the orchestra has undergone during its history.

Otten initially came to St. Louis to conduct a small choral group, not to establish a symphony orchestra. He had studied in Belgium at the Leige Royal Conservatory of Music and in Berlin with conductor-composer Albert Becker. He arrived to begin his work as a choir director but within six weeks time, the ensemble broke up. Otten was left without a group to conduct. In 1880, he formed the St. Louis Choral Society for local citizens interested in singing. The group had 80 choral singers and 31 orchestra members during the 1881-82 season.

The St. Louis Choral Society attracted additional instrumentalists who had been members of the dissolved Musical Union orchestra. The society’s name was changed to the St. Louis Choral-Symphony Society and officially incorporated in 1893, acknowledging both the choral and orchestral aspects. Under Otten’s leadership, the subscription concerts peaked at nine during the seasons. He resigned after the 1893-94 season because the board reduced the number of subscription concerts to seven due to finances.

The 1904 World’s Fair in St. Louis provided the orchestra with almost daily opportunities to perform. Alfred Ernst had held the position of conductor since Otten’s departure and had successfully increased the regular season to 12 concerts. The world’s fair concerts featured guest conductors. Ernst resigned in 1907 to return to his native Germany. Under his leadership, the chorus membership had increased to 200 and the orchestra to 55 members.

The name changed in 1907 to the St. Louis Symphony Orchestra and, the newly appointed conductor, Max Zach, was attracting artists on an international level. In addition to being an experienced conductor, he had also played principal viola with the Boston Symphony. Under his leadership, orchestra members received regular pay.

The orchestra moved to its permanent home of Powell Hall, also known as Powell Symphony Hall, in 1968. This concert hall was built in 1925 and was originally called the St. Louis Theatre. It was a popular place for people to see live vaudeville acts and motion pictures. The theater was transferred to the St. Louis Symphony Society in 1966 and underwent an extensive $2 million restoration. It was renamed Powell Hall in honor of a St. Louis shoe executive whose widow donated $1 million to the symphony. This was added to a $2 million Ford Foundation grant.

The principal architects were from the St. Louis firm of Wedemeyer, Cernik & Corrubia, with additional advisors who had worked on the John F. Kennedy Center for the Performing Arts and the Metropolitan Opera House at Lincoln Center. Powell Hall re-opened January 24, 1968, to wonderful reviews that included the acoustics and renovated architecture. The foyer resembled the Versailles royal chapel with its red, gold and cream colors, crystal chandeliers, and intricate designs on the ceiling. Isaac Stern, the celebrated violinist, compared the 2,689-seat hall to New York’s Carnegie Hall and Boston’s Symphony Hall.

After seasons of modern and classical music, U.S. and world premieres, 1976 saw a return to the symphony’s choral roots in the founding of the St. Louis Symphony Chorus. Originally, the group performed as part of the summer pops concerts held in the St. Louis area, but have since added performances of major symphonic choral works. The principal pops conductor was Richard Hayman who was appointed in 1976 and held the position for more than 30 years. Hayman was well-known in the pops field, having served as chief arranger under Arthur Fiedler for the Boston Pops Orchestra.

The St. Louis Symphony Youth Orchestra was founded under the direction of Leonard Slatkin in 1970 when he was an assistant conductor to music director, Walter Susskind. Slatkin later served as the orchestra’s music director from 1979-1996. During his leadership, the IN UNISON Chorus was founded in 1994. The name of this group is deliberately in capital letters and was created to bridge diversity and community issues. Its 120 members are from various backgrounds and part of the African-American community. The chorus also provides scholarships and awards to young people. Following his tenure, he was appointed as conductor laureate. The National Endowment for the Arts honored Slatkin in 2003 with the National Medal of Arts.

The current music director, David Robertson, has been with the St. Louis Symphony for 10 years. During that time, the variety of concerts has included orchestra and chorus for large choral works such as Carmina Burana by Carl Orff and a concert version of Aida by Verdi, orchestral works, and numerous guest artists. He also maintains the tradition of the youth orchestra, music education, and community outreach. It has been during Robertson’s tenure that the orchestra changed its name again. In 2010, it dropped the word “orchestra” from its name and became the St. Louis Symphony. 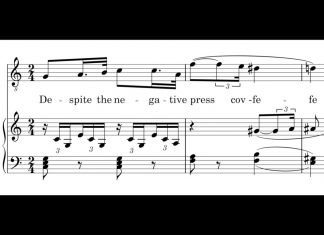 CMUSE - Aug 28, 2017
The ‘covfefe’ tweet appeared out of nowhere on President Trump’s Twitter account, leaving everyone surprised and confused. There were a lot of memes made...