In a world of music that is often dominated by works from Italian and German composers, the impressive catalogue of compositions from Spain is all too frequently overlooked. Classical Spanish music perhaps conjures the image of castanets, flamenco guitarists and passionate dancers and to some extent, this is an important component of music from Spain, but it is by no means the limit. Below, I have listed a few works by Spanish composers that offer a springboard into this area of abundant musical wonders.

Issac Albéniz was Spanish composer active in the latter part of the 19th Century. Not only was Albéniz a formidable composer but he was a virtuoso pianist and conductor with a notable reputation. His early life was a colourful one that included frequent attempts to run away from home and an emerging reputation as a child prodigy.

Later, Albéniz continued to tour as he had in his childhood, working in both Paris and London. The influence of composers such as Ravel and Debussy made a strong impact on Albéniz but his compositions remained staunchly Spanish in their origins. Throughout his middle period and later period works the influence of Flamenco rhythms and modality thread through his pieces. He composed over fifty piano pieces and many for guitar.

Of the piano works ‘Iberia’ (1909), is often felt to be the jewel in Albéniz’s crown. ‘Iberia’ is a collection of works for solo piano that the composer divided into four books. On a first hearing, the pieces sound distinctly French and they were praised by Messiaen and Debussy as a ‘wonder for the piano’. They are a diverse collection that ably describes the images of Spain and features many elements that can be directly traced back to Spanish Folk music.

De Falla is one of the most important composers to emerge from Spain. Like Albéniz, De Falla was a remarkable pianist who studied the instrument in Madrid. Even though De Falla’s compositions are richly flavoured by his Andalusian heritage, he also drew inspiration from the dominant French composers of the day.

Nights in the Gardens of Spain is De Falla’s first serious foray into orchestral music. In many respects, this work resembles a concerto for piano and is formed into three colourful movements. The first, ‘At The Generalife’ is a depiction of a Moorish palace in Granada; the second, ‘Distant Dance’, brings the flamenco spirit to the music and the third movement, ‘In the gardens of the Sierra de Códobra’, evokes these beautiful ancient gardens.

Originally De Falla had conceived these pieces as solo piano nocturnes but was encouraged by a notable pianist of the time to set them for piano and orchestra. The piano writing is complex and full of elaborate twists and turns that present a challenge for any aspiring soloist. De Falla rarely allows the piano to dominate the musical landscape in spite of the virtuosic writing and instead creates three well-crafted musical impressions of his country.

Rodrigo is possibly the most celebrated Spanish composer of the 20th Century. He was born in Valencia, Spain, the youngest of ten children. An outbreak of diphtheria left the young Rodrigo nearly blind, an event that he attributed in part to his musical progress.

Rodrigo showed his musical gifts at a young age and by the early 1920s was a highly respected pianist and emerging, composer. Rodrigo studied with the composer Paul Dukas who made a profound influence on the young composer and whose style you can hear in Rodrigo’s own compositions.

The outbreak of the Spanish Civil war in 1936 left Rodrigo and his wife with a difficult decision. At the time they were enjoying time in Germany, in the spa town of Bade-Baden, eventually deciding to remain there and teach Spanish and music at the Institute for the Blind.

In 1938 Rodrigo had a lunch meeting with the guitarist Regino Sainz de la Maza that directly lead to the idea of a piece that firmly established Rodrigo in the hearts and minds of the listening public. This idea was to become the famous ‘Concerto de Aranjeuz’.

The concerto was completed in 1939 and followed a three-movement structure: Allegro con spirit; Adagio and Allegro gentile. The concerto is bursting with the sounds, rhythms, and melodies of Spain. It is one of the most performed concertos for the guitar beautifully blending the warm timbre of the guitar against the orchestra. The second movement is possibly the most celebrated guitar piece in the repertoire. There is a deep melancholy in the harmony and melody combined with a gentle evocation some quiet Spanish scene.

Granados like many of his contemporary composers was a formidable pianist. This is reflected in his output along with the present influence of French composers like Debussy and Saint-Saens. Granados is credited with having given the first performance of Grieg’s Pino Concerto in Spain that shows his prowess on the instrument.

Like Grieg, the music of Granados is highly lyrical and possibly even poetic. The set of six pieces that Granados titled ‘Goyascas’ (1911), have become amongst the composer’s most performed works. Such was the popularity of the piano pieces that Granados then proceeded to compose an opera with the same title.

The Goyascas were though to be inspired by the paintings of the Spanish artist Goya although Granados gave no specific indication of which paintings. The pieces appear in two books with the ‘Maiden and the Nightingale’ often the most widely performed. Granados’s unusual and distinctive piano techniques are in evidence throughout the suite with delicate figurations, intricate rhythmic patterns and wealth of harmonic colour. They represent a significant challenge to perform well for any pianist but also present a delightful window into the world of classical Spanish music. 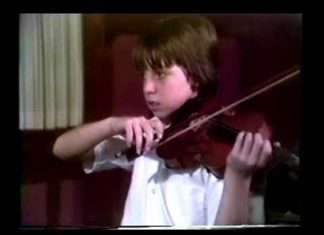 CMUSE - Jan 26, 2015
This video of young Joshua Bell playing for famous teacher Ivan Galamian gives a great lesson to students, teachers and parents. It shows us...

Project to use music to track melting ice in Antarctic