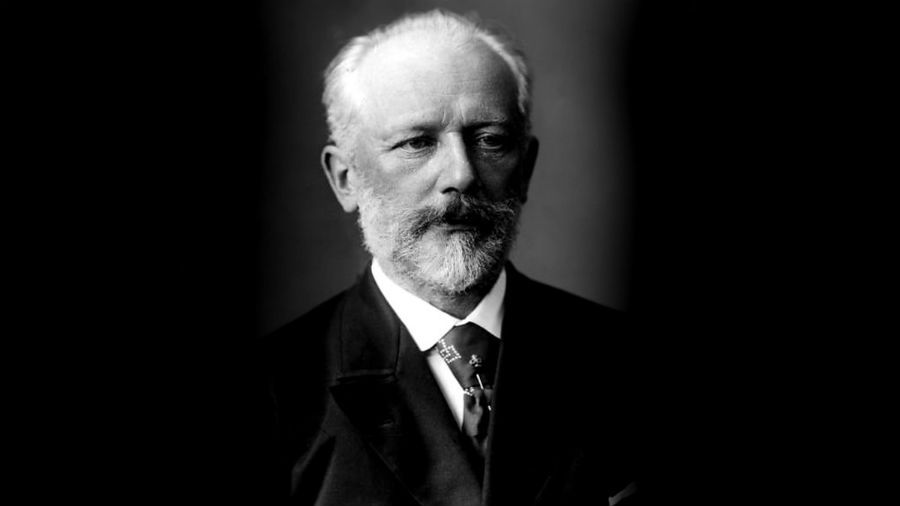 With a body of work of 169 compositions, whose genres include symponies, concertos, operas, ballet, chamber music and even a choral setting of the Russian Orthodox Divine Liturgy, Tchaikovsky composed some of the most popular theatrical music within the classical repertoire. He was the first Russian composer to acquire a solid reputation and career abroad, to the point that he appeared at the inaugural concert of Carnegie Hall in New York in 1891.

Tchaikovsky studied at the Saint Petersburg Conservatory, where he received a western-oriented teaching that set him apart from the nationalist Russian composers known as “The Five,” with whom he had a complicated professional relationship. In fact, even though he had a solid reputation abroad, in Russia he was considered as too dependent on Western traditions. However, in 1880, during commemoration ceremonies for the Pushkin Monument in Moscow, Fyodor Dostoyevsky maintained that Pushkin had voiced the need for Russia to pursue a “universal unity with the west.” Not only was Dostoyevsky’s message widely acclaimed throughout the country, but the disdain for Tchaikovsky’s music just… evaporated. What’s more, the young intelligentsia of Saint Petersburg, including Alexandre Benois, Leon Bakst and Sergei Diaghilev followed him like a cult leader.

Continue reading to learn some curious facts about the composer’s life.

‘The Tempest’ drew Nadezhda von Meck to him

In 1877, wealthy businesswoman Nadezhda von Meck supported violinist Iosif Kotek, who was a former student and friend of Tchaikovsky’s and who had been recommended to her by pianist Nikolai Rubinstein. She had been impressed by Tchaikovsky’s The Tempest and had asked Rubinstein at length about the composer. It was Kotek, however, who urged her to write to him, whereupon she introduced herself as a “fervent admirer.” Thus, a relationship of patronage and epistolary friendship blossomed: between 1877 and 1890, they exchanged over 1200 letters, and she was the one who, after the critics tore his Fifth Symphony apart, encouraged him to persevere with his composing. They just met in person once, by chance, in August 1879.

Composed in 1873, The Tempest is a symphonic poem in F minor that is based on the play “The Tempest” by William Shakespeare and it shares some similarities with the structure of Tchaikovsky’s Romeo and Juliet Fantasy overture. It contains themes depicting the stillness of the ship at sea and, more predominantly, the love between Ferdinando and Miranda. “The sea. Ariel, spirit of the air, raising a tempest at the bidding of the magician Prospero. Ferdinand’s ship sinks. The enchanted island. The first shy awakening of love between Miranda and Ferdinand. Ariel. Caliban. The young couple’s love grows to overwhelming passion. Prospero renounces his magic powers and quits the island. The sea,” was the basic program that music critic Vladimir Sassov suggested as an outline to the composer.

His relationship with his wife has some parallels with Onegin

In Eugene Onegin, Tchaikovsky’s opera based on the novel in verse of the same name by Pushkin, country girl Tatyana falls in love with Onegin, a dandy who is simply a creation of her own fantasies: even before meeting him, she was in love with the heroes of the fictional romances she had been reading, and, upon setting her eyes on the vain, despicable Onegin, she imbues him with all the qualities of her romantic ideals.  The Byronic hero-like Onegin tells her to forget him. Many years later, however, the situation drastically changes: Tatyana is the wife of a retired general, and when she meets Onegin again at a ball hosted at her residence, he falls in love with her and she rejects him.  What’s more Shortly after meeting Onegin, young Tatyana wrote a confessional letter to him.

Curiously, This episode had a counterpart in Tchaikovsky’s real life: it was 1877, and, as he was composing Onegin, he received a similar letter from a 28-year-old former pupil, Antonina Milyukova, who, by then, worked as a seamstress “I won’t be able to forget you or stop loving you…I don’t want to look at any man but you..It is not the love of a moment, but a feeling that has been growing for a long time. I simply cannot, and will not, destroy this feeling now”. He visited Milyukova on May 20, telling her he could never love her. However, by June 1877, Tchaikovsky proposed marriage to Milyukova, also to put any rumors regarding his sexual inclination to rest. The marriage, of course, was disastrous and they permanently separated only six weeks after the wedding.

He wrote the 1812 Overture “Without warmth and without love”

Three grand events were set to take place in Russia in the early 1880s: in 1880 the Cathedral of Christ the Saviour commissioned by Tsar Alexander I to commemorate the Russian victory against the Napoleon army was nearing completion; in 1881, Alexander II would be crowned Tsar; in 1882, the Moscow Arts and Industry Exhibition would take place. For this reason, Nikolai Rubinstein suggested that Tchaikovsky write a commemorative piece to use in the related festivities. Tchaikovsky started working on the project on October 12th, 1880 and finished the piece six weeks later. He described the work as “very loud and noisy,” adding that he wrote it “with no warm feeling of love, and therefore there will probably be no artistic merits in it.” Even though organizers planned to have the overture performed in the square in front of the cathedral, complete with a brass band, bells of the cathedral and cannons fired from an electric switch panel, the performance did not take place—the plan was over-ambitious. What’s more, Alexander II was assassinated that following March and that deflated much of the enthusiasm for the project. Nonetheless, it became one of the most popular pieces by Tchaikovsky.

The First Version of the Piano Concerto n. 1 was heavily criticized by pianist Nikolai Rubinstein

Composed in the winter of 1874/75 and revised in the summer of 1879 and then again in December 1888, it now ranks among the best known piano concertos. However, Nikolai Rubinstein, Tchaikovsky’s desired pianist for the premiere, gave scathing criticism to the first version of the composition — he later repudiated those accusations, and championed the work quite fervently. In fact, when Tchaikovsky gave a preview of the concerto to Rubinstein and another musical friend, Nikolai Hubert, at the Russian Musical Society in Moscow three days after finishing the composition, the former voiced his criticism. “It turned out that my concerto was worthless and unplayable; passages were so fragmented, so clumsy, so badly written that they were beyond rescue; the work itself was bad, vulgar; in places I had stolen from other composers; only two or three pages were worth preserving; the rest must be thrown away or completely rewritten,” he wrote in a letter to his patron Nadezhda von Meck. So he opted for German pianist Hans von Bülow, who was about to depart for a tour in the United States.

This meant that the concerto would premiere half a world away from Moscow, a thing that might have influenced Tchaikovsky’s choice: he had been so shaken by Rubinstein’s criticism that he wanted his concert to be heard in a place where he would not have to personally face any humiliation. Well, during the first performance, which took place on October 25th, 1875 in Boston, the audience was so impressed by the concerto that von Bülow had to give an encore for the Finale.

Tchaikovsky was not too enthusiastic about the Nutcracker

If you remember Disney’s Fantasia, upon the introduction of the animated sequence featuring the Nutcracker suite, commentator Deems Taylor observes that the composer “really detested” the score of the ballet: he found it overly simplistic, if compared to The Sleeping Beauty. The Nutcracker was commissioned by the Imperial Mariinsky Theatre as a festive treat following the huge success of The Sleeping Beauty which saw the collaboration between Tchaikovsky and choreographer Marius Petipa. Petipa took charge of the synopsis of ETA Hoffmann’s The Nutcracker and The Mouse King, creating two scenarios, the former a children’s pantomime during the festivities, the latter a a journey to the Kingdom of Sweets. Upon reading the synopsis, complete with a “musical wishlist,” Tchaikovsky was appalled. “I am experiencing some kind of crisis,” he stated. Eventually, it was his sister Sasha’s death that rekindled his inspiration, and in Clara, the protagonist of the ballet, he found a parallel for his sister. In fact, the score, despite the simplistic plot, abounds in melancholic colors: think of the solemn descending motif of the pas de deux of the Sugar Plum Fairy and the Prince at the end of the second act or of the minor passages that characterize the “Waltz of the Flowers”.

The Nucracker remains remarkable for its wealth of melodic invention and contains some of his most memorable melodies, such as the Trepak, aforementioned the Waltz of the Flowers and the Dance of the Sugarplum Fairy, which displays the use of the celesta, a new instrument Tchaikovsky had discovered in Paris. He wanted to use such instrument for the Sugar Plum fairy because it conveyed a “heavenly sweet sound.”

His death is still clouded in mystery

On November 6th, 1893, nine days after the premiere of the Pathétique, Tchaikovsky allegedly died of cholera. Apparently, five days before, he had gone to Leiners, a restaurant on the Nevski Prospekt, where he had ordered a glass of water: the city was in the middle of a cholera outbreak and so regulations required water to be boiled before being served. Even though no boiled water was available at Leiners, Tchaikovsky requested unboiled water and drank it anyway, despite the fact that he had been warned not to do so: the next day, he started displaying symptoms of cholera. The circumstances of his death, however, gave way to a wide array of theories: while the “tainted water theory” has a robust following, Biographer Anthony Holden postulates Tchaikovsky might have contracted cholera by less-than-hygienic sexual practices he had been engaging in with male prostitutes in St. Petersburg, and that drinking unboiled water was just a means to conceal the real way he had become infected. Another theory regarding the tainted water has Tchaikovsky drinking it consciously because he was hopelessly infatuated with his nephew Vladimir “Bob” Davydov, which would explain the anguish portrayed in the Pathétique.

Russian musicologist Alexandra Orlova, by contrast, suggested a suicide ordered by the “court of honor” because of a homosexual scandal: on that point, a in BBC documentary titled Pride or Prejudice, which investigated the theories regarding Tchaikovsky’s death, it emerges that the symptoms of Tchaikovsky’s cholera paralleled and “fit very closely with arsenic poisoning.” Yet another theory regarding his suicide is that it was ordered by Tsar Alexander III himself because the composer had seduced the son of the caretaker of his brother Modest’s apartment block.