The music of Olivier Messiaen is like no other I have heard. His highly individual methods of composition coupled with his use of bird-song and his devotion to the Catholic Church, making his the most brilliant and spiritual music. Messiaen was born in Avignon on the 10th of December 1908. His mother was a greater influence on the young Messiaen that his Father, who was a teacher of English and translator if Shakespeare. It was Messiaen’s Mother who read and wrote poetry for the young composer, wrapping him in a fantastical world of fairy tales. Sadly, she never saw her predictions for her son come true, but even in his infancy, Messiaen was fascinated by color and the music of the birds.

Until 1917, Messiaen was largely self-taught. He enjoyed the works of Shakespeare and, as a child, gave private performances of them. His earliest composition was a setting of the Tennyson poem, ‘The Lady of Shalott’. Once Messiaen began learning the piano, his remarkable talents burst through quickly. He rapidly absorbed the works of Mozart’s, Gluck, Berlioz, and even Wagner, allegedly able to accompany himself singing all the parts of the operas. What changed Messiaen forever was when he was presented with a score of Debussy’s ‘Pelléas et Mélisande’. Such was the impact of this impressionistic masterpiece that Messiaen completely reconsidered how music could work.

In 1919, Messiaen entered the famous Paris Conservatoire, where he was privileged to study with Paul Dukas and Marcel Dupré. It must have been a place he enjoyed being as he was there for nearly eleven years. He won numerous awards for organ playing, composition, and compositional techniques such as counterpoint and harmony. It was Dukas who asserted a strong influence on Messiaen, and it was during this period of study that Messiaen composed the eight ‘Preludes’ for piano.

While the influence of Debussy is undeniable, the ‘Preludes’ from Messiaen’s pen already illustrate the new direction he was taking. What separates Messiaen from many other composers is that he was a synesthetic. Messiaen quite literally saw colors when he heard music, and this played a vital part in his compositional practice. It enabled Messiaen to compose sonorities and textures that were uniquely his.

Messiaen also developed his own method for harmonic progression based on his ‘modes of limited transposition’. Each of these modes had its own color that Messiaen would skilfully blend to create the ‘Preludes’ and many works to come. The modes begin with a whole-tone scale, evolving as they did into six further symmetrical divisions of the octave.

The parallels with Debussy are often drawn between both composers not only for harmonic or melodic ideas but because they also poetically titled each of their preludes.

The eight Preludes are titled as follows:

For the first prelude (‘The Dove’), Messiaen composes using his ‘second mode’. The colors directly associated with this mode are orange and violet that have E major as their center. The piece is written in a slow tempo and is highly expressive. Chords shimmer and sparkle around the octave melody making full use of the natural resonance of the piano. It is an impressive and assured opening piece for such a young composer, but one that indicates Messiaen’s immense gift for sonority and technical facility at the piano.

The second prelude ‘Song of ecstasy in a sad landscape’, is a somewhat bleaker piece than the opening prelude. We hear the thematic material four times before it is treated by diminution and augmentation through the number of active parts. Here Messiaen chooses the colors of mauve, grey, and Prussian blue. The ecstasy is conveyed through the middle section of the work, where Messiaen uses diamond and sliver colors to bring a stark contrast to the outer sections.

For the third prelude, ‘The Light Number’, uses an interesting combination of vibrant colors; orange with violet veins. Messiaen chooses E major again for this piece and employs the compositional device of ‘canon’ (this time at the octave), a favorite of the composer. This leads to the fourth prelude that offers a dramatic contrast to the previous one. ‘Dead Instants’, feels distant and removed with a slow and pensive tempo marking. In this prelude, Messiaen manages to eloquently create a deep sense of calm coupled with a real feeling of the eternal. Messiaen’s faith seems to permeate this movement that is vibrantly expressive in mauve, green, and soft grey.

The fifth prelude remained one of Messiaen’s much-loved even into later life. He has a genuine fondness for this prelude and the sixth too. Prelude five is a more complex piece as it does not only use a single-mode but many modes and, therefore, many more combinations of colors that, in some respects, give a clue to future pieces that Messiaen would compose. Messiaen seems to be thinking almost orchestrally in this prelude with distinct timbres of brass, woodwind, and strings in certain sections. Like the previous preludes, the sonorities that Messiaen conjures from the piano are luminescent.

With the sixth prelude, Messiaen produces his longest section. The title, ‘Bells of Anguish and Tears of Farewell’, give a definite clue to the sounds that the composer intends to evoke. The harmonics of the bells are present in the prelude from low to high and in the challenging chordal clusters. Even though the mood of this prelude begins within an overtly somber tone, the light begins to overshadow death as the colors change at around four minutes at the climax of the piece. Light, peace, and the eternal come at the close of the prelude creating a moving conclusion.

In the seventh prelude, Messiaen cleverly reflects those of the fourth and brings with this a structural unity to the set of eight. It is a calm song of longing that almost acts as the moment of serenity before the final prelude. In the eighth and final prelude, we discover Messiaen, the virtuoso pianist, and a section that, at its most significant moment, is brimming with joy. There is a brilliance that radiates from this prelude like none of the others. The influence of Ravel is ever-present, but the final flourishing gesture is undeniably Messianic. 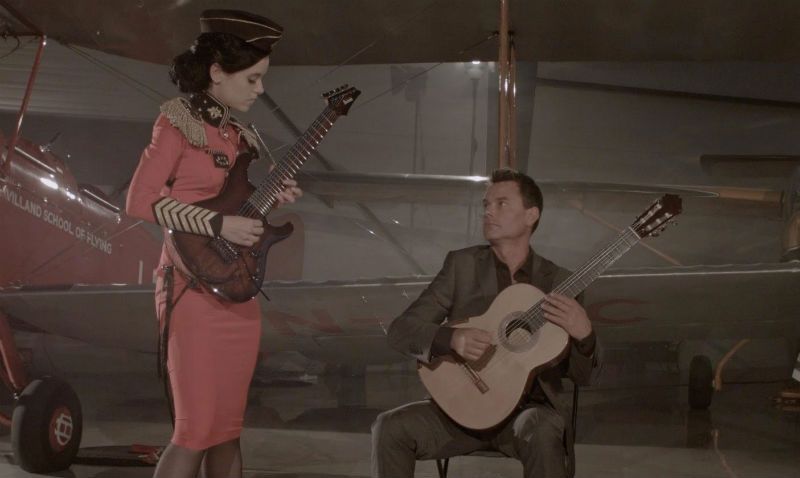 D Grant Smith - Oct 6, 2014
Niccolo Paganini’s Caprice No 24 is known for being a very complex piece, especially for the instrument it was composed (solo violin). Guitar virtuosos...