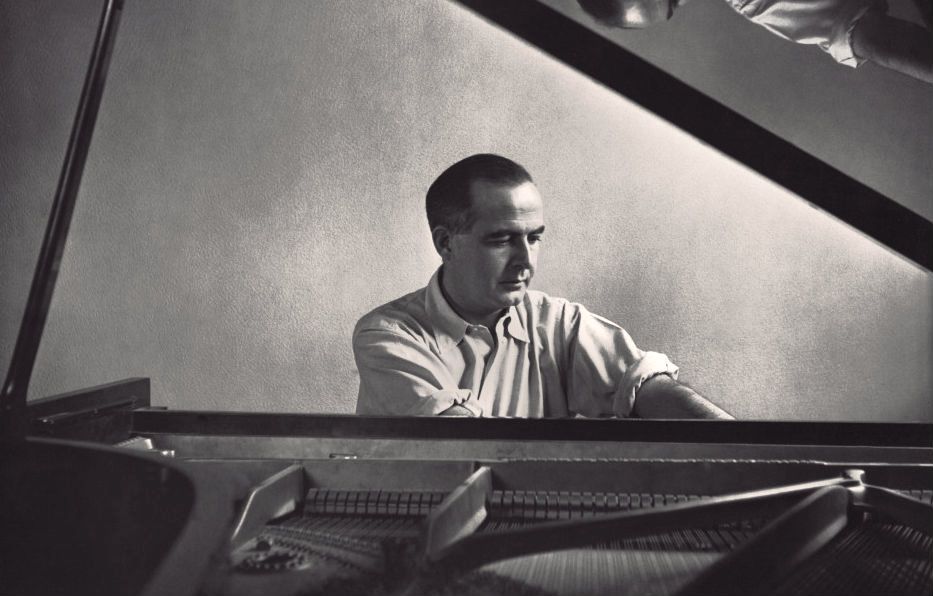 There are classical composers who represent the 20th century American sound more acutely and specifically than Samuel Barber does, but no other who has come to represent so much of its rugged spirit. What Nathan Broder wrote about him in 1954 still holds true:

“Lyricism is not a prominent quality in the significant American music of the 1930s. The decade is marked by a search for style, a development or integration of individual techniques, a working-out of personal idioms … The ferment of such a time produced important and exciting works, but it was not conducive to the calm contemplation of beauty for its own sake. Barber, primarily a lyric poet, remained aloof from the swirling currents in which many of his colleagues were immersed. His visions were not of the sort that required the forging of an individual idiom. They could be best expressed in an existing and well-known tongue.”

This is not to say that Samuel Barber was in any sense a traditionalist, but he wasn’t an experimental musician; his focus was on enunciating his own vision, not in creating a broader range of tools and forms.

When the music critic Virgil Thompson wrote in 1943 that Barber seemed focused on “laying [to rest] the ghost of romanticism without resorting to violence,” he accurately conveyed the effect of Barber’s early corpus but, most likely, not his cause. The relative consistency of Barber’s style, over the course of his career, would gradually reveal that his motives were—just as he had always suggested—not so ideological.

1. He composed his first piece at age 7

Samuel Barber was born into an upper-class family in West Chester, Pennsylvania on March 9th, 1910. Almost immediately, Barber demonstrated musical aptitude and a lack of interest in the sorts of things that ordinarily interested boys of his generation. His parents, influenced by the social expectations of the time, may have wondered whether he was gay; time would reveal that he in fact was. But his first coming-out letter to his mother, which he wrote when he was 9 years old, had a different tone to it:

“I have written this to tell you my worrying secret. Now don’t cry when you read it because it is neither yours nor my fault. I suppose I will have to tell it now without any nonsense. To begin with I was not meant to be an athlet[e]. I was meant to be a composer, and will be I’m sure. I’ll ask you one more thing.—Don’t ask me to try to forget this unpleasant thing and go play football.—Please—Sometimes I’ve been worrying about this so much that it makes me mad (not very).”

Barber idolized his aunt and uncle, Louise and Sidney Homer, who were major figures in the New York music scene; his mother may have taken his early interest in composition as mere hero-worship if he were not such an obvious prodigy in his own right. By the time his parents sent 14-year-old Samuel to Philadelphia’s Curtis Institute of Music in 1924, he had already written 14 pieces (including three piano sketches, written by Barber at 13, that are still widely performed to this day).

2. His first major success was the overture for an 18th-century play

Barber’s first full-orchestra composition was a 1931 overture for Richard Brinkley Sheridan’s play The School for Scandal (1777), an intentionally silly English comedy of manners that involved disguises, Shakespearean parody, and a comically elaborate chain of extramarital flirting.

3. He produced most of his best-known work in his twenties

During the 1930s, Samuel Barber emerged as an almost implausibly promising young composer whose refreshing style would change American classical music forever. His early compositions did just that, but his subsequent style was very much in their spirit—and it was clear that critics had expected him to constantly break new ground, something that Barber had little real interest in doing.

Barber wrote most of his widely known non-operatic pieces—his Cello Sonata, his first symphony, his String Quartet (which included “Adagio for Strings”), “Agnus Dei” (a choral adaptation of “Adagio for Strings”), his first Essay for Orchestra, and his Violin Concerto—during the 1930s. This is not to say that he didn’t produce more great work (he was consistently prolific, and didn’t really slow down until the 1970s); just that he had already definitively established his style during that decade, and that, because his style was unique, critics assumed that they reflected interest in promoting a specific compositional movement. They didn’t—they merely reflected Barber’s personal style as a composer—and this made Barber too much of a popular composer, too reliable and consistent, to be the sort of radically innovative and divisive figure many critics hoped he would become.

4. He got a little tired of hearing about “Adagio for Strings.”

Barber’s own feelings about his popularity were a little mixed, grounded as it was in his “Adagio for Strings”—a piece from his String Quartet, championed by Arturo Toscanini, that subsequently became a radio standard after it was played at the funeral of President Franklin D. Roosevelt in 1945. Iconically used again for the funeral of President John F. Kennedy in 1963, it has become what music historian Thomas Larson calls “America’s secular hymn for grieving the dead”—adding weight to dramatic scenes in films both good and terrible (most famously among them The Elephant Man and Platoon). Larson went on to say:

“The Adagio is a sound shrine to music’s power to evoke emotion. Its elegiac descent is among the most moving expressions of grief in any art. The snail-like tempo, the constrained melodic line, its rise and fall, the periodic rests, the harmonic repetition, the harmonic color, the uphill slog, the climactic moment of its peaked eruption—all are crafted together into one magnificent effect: listeners, weeping in anguish, bear the glory and gravity of their grief. No sadder music has ever been written.”

For his part, Barber may have been moved to tears for other reasons. “They always play that,” he told WQXR in 1978. “I wish they’d play some of my other pieces.”

5. Over time, his career transitioned more to opera

Samuel Barber’s anthology-style operas Hermit Songs (1953) and Prayers for Kierkegaard (1954) demonstrated his ability to work in the medium, but lacked the sort of narrative arc more commonly associated with the genre. Barber’s first traditionally-structured opera was his Vanessa (1957), on which he collaborated with his partner, Gian-Carlo Menotti, a talented composer in his own right who had already written nine successful operas; it was met with rave reviews, won the Pulitzer, and prompted Barber and Menotti to collaborate again on A Hand of Bridge (1959) and the 1975 revision of Antony and Cleopatra (1966).

6. His 30-year relationship with Menotti was the defining passion of his life

While Barber was still a teenager at the Curtis Institute, he met fellow student Gian Carlo Menotti and began what would become six decades of friendship and mutual attraction. In 1943, they purchased a large house (nicknamed “Capricorn”) together in New York’s Mount Kisco, and lived as a couple until 1974.

7. His last opera was a devastating critical failure, and his critical reputation collapsed at the same time as his relationship

Samuel Barber’s Antony and Cleopatra (1966)—on which he collaborated with Franco Zeffirelli, and not Menotti—was strange in many ways: a critical failure with an enduring legacy (thanks in large part to the fact that it featured some of the most impressive arias of Leontyne Price’s long career), an overproduced retelling of a Shakespearean story, and a gaudy, unwelcoming atmosphere. It was canceled after a single performance at the Met. Barber blamed creative differences between himself and Zeffirelli:

“The major villain of the piece has always been Franco Zeffirelli, who not only designed and directed the production but also prepared the libretto, adapting it from Shakespeare’s play. Barber may not have written a perfect opera, but there did at times seem to be another opera hidden beneath all the blinding glitter of a heaving extravaganza obviously meant to be the last word in operatic spectacle.

“‘What I wrote and what I envisioned had nothing to do with what one saw on that stage,’ Barber later told the writer John Gruen.”

But it is worth noting that Antony and Cleopatra was the only narrative opera Barber ever wrote without the assistance of Menotti; the fact that it was also his only unmitigated failure is an unlikely coincidence. It is reasonable to surmise that Barber may have been incapable of writing a strong traditionally-structured opera without Menotti by his side, a possibility to which Barber himself seemed to concede: despite the fact that he and Menotti had separated, they worked together on a revised version of the opera in 1975.

It is often said that the critical reception to Antony and Cleopatra drove Barber into alcoholism and destroyed his career, but the timetable of his compositions suggests that, if anything, it was actually his separation from Menotti that interfered with his productivity. He wrote only three pieces after they sold Capricorn, the only well-known piece among them being his final composition, the Third Essay for Orchestra (1978); he was diagnosed with cancer during the same year, and released no new work during the last three years of his life.

This is not to say that Barber’s last years were entirely miserable. His interviews suggest that he was in relatively good spirits, and while he and Menotti were no longer living together, they remained close. Menotti stayed by Barber’s side during the last stages of his illness, and was Barber’s greatest public advocate until his own death in 2007.