Conductor and pianist Daniel Barenboim recently unveiled his Youtube channel, and, in case you worry it will just collect his most notable performances, fear not: “I will talk about music – about pieces close to my heart, about pieces which I hope will interest you – and other subjects that preoccupy me, some social and some political, all subjects that have to do with the human being,” Barenboim declares in his introductory video. 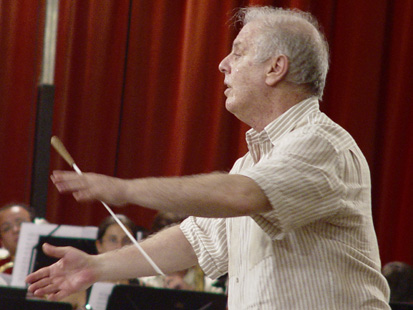 His videos largely consist of five-minute chats on masterpieces of classical music and music theory.

So far, he covered Brahms’ first piano concerto, the first movement of which is based on contrast: the full force of the orchestra alternates with the lyricism of the piano. “The dramatism [of the first piano concerto] is something that excites me every time I conduct this piece,” Barenboim explains.

Then came the two “pianistic” composers of the 19th century, namely Liszt and Chopin. Liszt is credited for the invention of recitals: without him, he says, there would have been no Wagner. Until he came on the scene, composers only played their own works, while he introduced the practice of playing other people’s compositions.

During a brief analysis of Chopin’s Ballade in G minor, Barenboim calls him “the first pianistic composer.” The Ballade in G Minor is so renowned that when Vladimir Horowitz came back to Europe after many years spent in America for a performance in Paris, when asked what he would play, he simply said “la ballade.”  The introduction, a surge, is almost improvisational in tone, and this allows the audience to imagine “for many things to come.” He explains the ballade as being like a promenade, because it covers what one “would normally see on a very interesting walk.” The piece then becomes dramatic, using the same material but in a completely different tone. It’s actually quite entertaining to watch Barenboim explain it with his usual composure, while, at the same time, he stammers on the keys with a highly dramatic intensity.

As he explained in the introduction to his channel, he also covers political matters. In a video about freedom of speech, he says it is not only a question of rights, but also a question of responsibility, and weighs in on the importance of social media.

If you are a fan of a style like the The Young People’s Concerts, Barenboim’s channel might be a good alternative, even though his calm demeanor is miles away from Bernstein’s larger-than-life personality.