Classical music tends towards the use of acoustic instruments, especially given that the invention of electronic instruments is a relatively new phenomenon. Historically, the classical musician and composer wrote and played music on the instruments they had available to them at the time. These instruments developed alongside technology that was spurred forward by many scientific discoveries.

Today, the palate of instruments available for the composer and musician is vast and over the past, fifty to sixty years has seen a tremendous rise in new technologies and new instruments that have given rise to extraordinary changes in musical style and sound.

This, in turn, means that the compositional options available to musicians today are far in excess of those on offer to composers say in the Renaissance. The danger seems to me that even though the creative options may appear greater today, the pitfalls are equally numerous. Just because making music today is freely available and quick does not guarantee its quality or diversity, both of which I feel are important in a vibrant musical culture.

Difference Between Classical and Electronic Music

Whilst we can agree then that the range of instrumental possibilities has exponentially increased over the past few decades, including those packaged in laptops and desktop computers, the ingredients that comprise a composition that lasts perhaps have not. Classical music, for instance, the Bach Brandenburg Concertos have been admired and performed for literally hundreds of years. They stand as a cornerstone of the Baroque repertoire, admired and adored by thousands of listeners. They possess a quality and appeal that is hard to define but must inherently be there as they have endured in popularity for so long. This is true of hundreds of pieces of classical music through the ages that seem to plug into something deep within us whether we are amateur listeners or academic musicians.

Much of the world of electronic music centres around the popular music genres that include, Trance, EDM, IDM, Hip-Hop and so on. The purpose of this type of music is to appeal immediately, often to an audience between 12 and 20, and to sell records. This is not to overlook the skill in writing music of this kind, nor the talent needed to produce consistently high-quality tracks within each of these popular genres. What is questionable is whether this music will match the endurance of the classical repertoire. How likely is it that in a hundred years from now, the music of Bruno Mars, Eminem or Deadmau5 will be being listened to and admired in the way it is today?

Perhaps this is only one side of what is actually quite a complex comparison. Making a judgement based purely on longevity could be misleading or short-sighted. It is, after all, impossible to know for certain what anyone will be listening to in a hundred or even five hundred years. It may be Bach, Mozart, Kid 606 and Aphex Twin are all still coursing through the airwaves and still topping their respective charts.

Electronic music also travels into the world of classical music. The possibilities that early electronic innovation provided composers in the early 1940s really paved the way for the commercial music that now dominates the radio stations and streaming services. One of the earliest pioneers of electronic music was a man called Pierre Schaeffer who almost single handily invented the concept of ‘Musique Concrete’. His early work included the remarkable ‘Étude aux Chemins de fer’, that really was a recorded and edited collection of sounds made by trains. The concept of Musique Concrete was a little like what Andy Warhol did to Art by drawing attention to the apparently every day and ordinary world, and by doing so deriving a new art. It was the commercial availability of the tape recorder that really pushed the work of Schaeffer and Pierre Henry forward and in many ways facilitated much of the music we hear today. Later composers like Karl Stockhausen and Pierre Boulez championed electronic music, developing new approaches to sound manipulation and creation. They brought about a revolution in contemporary classical music whose techniques the popular music writers were able to adopt.

Alongside tape was the development of sound synthesis that for the most part heralded from the work at RCA Laboratories, Princeton, New Jersey. Composers like Milton Babbitt was one of the first to explore the possibilities of sound synthesis in spite of its somewhat cumbersome methods of composition. These technological steps forward, in turn, led to the age of computer music and a short jump to the familiar chart-topping tracks that are being created and aired today.

The reason I am discussing this aspect of music history is to highlight the fact that in this way classical and electronic music are linked. It was the radical, free-thinking classical composers of the early part of the 20th Century who brought about a dramatic change in what was considered to be music as well as developing new sources of sound. The work of electronic composers continues in the classical world today in tandem with the commercial one. What seems to distinguish the two is that the commercial largely concerns itself with the current trends and making money whereas the avant-garde of today explore new musical forms and develop an ever more inventive way to synthesise sound. Valgeir Sigurðsson’s, album titled ‘Dissonance’ moves in similar circles. This Icelandic composer enjoys blending grand orchestral textures with electronic sounds, carefully manipulating and layering textures to produce evocative and disturbing soundscapes. Sigurðsson is fascinated with the deconstruction of time and space in his music. By using both the traditional orchestra and electronics he achieves a unique and fresh perspective on 21st Century music.

Whilst the more obvious differences between classical and electronic music are not difficult to distinguish, perhaps it is the links that make them present a more interesting analysis. The good news is that today there is enough variety in the music that is being written to appeal to everyone. It is where these two genres meet that I feel strongly points the way forward to the music that future generations will be listening to. 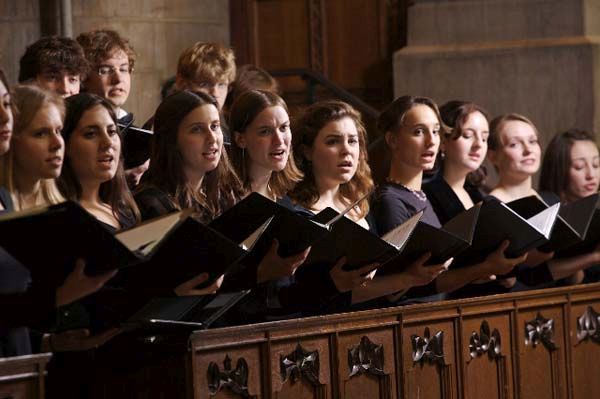 Jordan Smith - Jul 15, 2015
Research carried out by the Royal College of Music among singers and audience members at a classical music concert has uncovered exciting new evidence...