The prelude to Richard Wagner’s Tristan and Isolde supplies the main musical theme of the film, and Trier‘s use of an overture-like opening sequence before the first act is a technique closely associated with Wagner. This choice was inspired by a 30-page section of Marcel Proust’s In Search of Lost Time, where Proust concludes that Wagner’s prelude is the greatest work of art of all time.

This film’s music marks the fifth consecutive collaboration between Aronofsky and English composer Clint Mansell, who composed the original score for the film.The non-original music featured in Black Swan consists of music by Tchaikovsky featuring performances on-screen and in the soundtrack by violinist Tim Fain.

3. A Clockwork Orange: Symphony No. 9 ‘Ode to Joy’ by Beethoven

The soundtrack to A Clockwork Orange features mostly classical music selections and Moog Synthesizer compositions by Wendy Carlos (then known as Walter Carlos). Alex (Malcolm McDowell), the main character, is a charismatic, sociopathic delinquent whose interests include classical music (especially Beethoven), rape, and what is termed “ultra-violence”. In the novel, Alex is accidentally conditioned against all music, but in the film, he is only conditioned against Beethoven’s 9th Symphony.

4. Apocalypse Now: ‘Ride of the Valkyries’ from Die Walküre by Wagner

Now there is an exciting scene. The quick cuts and editing, the helicopters dropping bombs and firing their machines guns while Wagner’s bombastic “Ride of the Valkyries” is played, all get the adrenaline pumping.

The Space Odyssey’s soundtrack is known for its use of many classical and orchestral pieces and credited for giving many classical pieces resurgences in popularity especially Richard Strauss’ symphonic poem Also Sprach Zarathustra (inspired by the writings of Friedrich Nietzsche), and György Ligeti’s Atmosphères. The soundtrack has been re-issued multiple times: including a 1996 version and a digitally remastered version in 2010.

The classic 1990 film Pretty Woman has grossed over $463 million worldwide since its release. One of the most famous scenes occurs when Edward (Richard Gere) takes Vivian (Julia Roberts) to the opera (San Francisco Opera to be specific). The opera they see, La Traviata, is not such a coincidence since it is the story of a courtesan falling in love with one of her suiters, a theme reflected with the film’s characters (although no one dies of consumption). Scenes from Act I, II and III are featured.

7. Platoon: Adagio for Strings by Barber

The “Adagio for Strings” was written by American composer Samuel Barber when he was in his 20s. With a tense melodic line and taut harmonies, the composition is considered by many to be the most popular of all 20th-century orchestral works. The Adagio is a shapeshifter, widely appropriated in film and television.

8. The Hunger: The Flower Duet’ from Lakmé by Delibes

The Hunger is a 1983 British horror film directed by Tony Scott, and starring Catherine Deneuve, David Bowie, and Susan Sarandon. It is the story of a love triangle between a doctor who specialises in sleep and aging research and a vampire couple. The soundtrack features a piano adaption of The Flower Duet in a memorable scene where Catherine Deneuve plays the piano for Susan Sarandon.

The movie Amadeus made Mozart a household name. It did more to bring his music into everyday life than a thousand concerts and compact disks. Peter Shaffer’s screenplay is an inspired piece of storytelling.

Truly, Madly, Deeply is a 1990 British fantasy music drama film made for the BBC’s Screen Two series. It is intelligent, moving, and deeply funny story about love and death. Nina (Juliet Stevenson), a scatterbrained professional translator, has lost the love of her life, Jamie (Die Hard’s Alan Rickman). As her life (and her flat) slowly falls to pieces, she’s inundated by an endless stream of repair men and eligible suitors. But rather than go on with life, Nina dwells on her dead love, slumped at her piano, endlessly playing half of a Bach duet. Then, in a truly magical sequence, his cello suddenly joins her melody … and Jamie’s back from the dead.

11. Chocolat: The Gnossiennes by Satie

This is the first of six Gnossiennes by Eric Satie. This piece has been used in a number of films including “Chocolat” scored by Rachel Portman.

The film’s musical score by Michael Nyman is entirely based on themes from the slow movement of Mozart’s Sinfonia Concertante in E flat, bars 58 to 61 of which are heard in their original form immediately after each drowning.

Behind the Candelabra is directed by Steven Soderbergh and stars Michael Douglas, Matt Damon, Dan Aykroyd, Rob Lowe, Scott Bakula and Debbie Reynolds. The movie centers on the famous pianist Liberace and the secret affair he had with young Scott Thorson.

Elvira Madigan, byname of Piano Concerto No. 21 in C Major, K 467, three-movement concerto for piano and orchestra by Wolfgang Amadeus Mozart. It was completed on March 9, 1785. Its wide recognition is in large part due to the Swedish film Elvira Madigan (1967), in which its lyrical second movement was featured and from which it derives its byname.

Jocelyn Pook wrote the original music for Eyes Wide Shut, but like other Kubrick movies, the film was noted for its usage of classical music. The opening title music is “Waltz 2 from Shostakovich’s Suite for Variety Stage Orchestra”. One recurring piece is the second movement of György Ligeti’s piano cycle “Musica ricercata”. Kubrick originally intended to feature “Im Treibhaus” from Wagner’s Wesendonck Lieder, but the director eventually replaced it with Ligeti’s tune feeling Wagner’s song was “too beautiful”.

Music flows through nearly every frame of Terrence Malick’s darkly devotional film The Tree of Life. The director is an avid classical listener and the soundtrack of his film features works of François Couperin, Bach, Berlioz, Smetana, Mahler, Holst, Górecki, Tavener, and others, alongside original cues by Alexandre Desplat.

La forza del destino is an Italian opera by Giuseppe Verdi. The musical score for the French films Jean de Florette and Manon des Sources uses the main theme for both.

Released by Paramount Pictures on June 11, 1986, Ferris Bueller’s Day Off became one of the top-grossing films of the year and was enthusiastically received by critics and audiences alike.

Bagdad Café is a comedy set in a remote truck-stop café and motel in the Mojave Desert in the US state of California. The film has a melodious backdrop in the form of J. S. Bach preludes played on the piano by Brenda’s son (Darron Flagg).

It is well known that Arvo Pärt composed original music for roughly forty films. It is, however, less known that Pärt’s concert music has been used repeatedly in a large number of films. In particular, the composition Spiegel im Spiegel (1978) appears in no less than twelve films including Heaven. 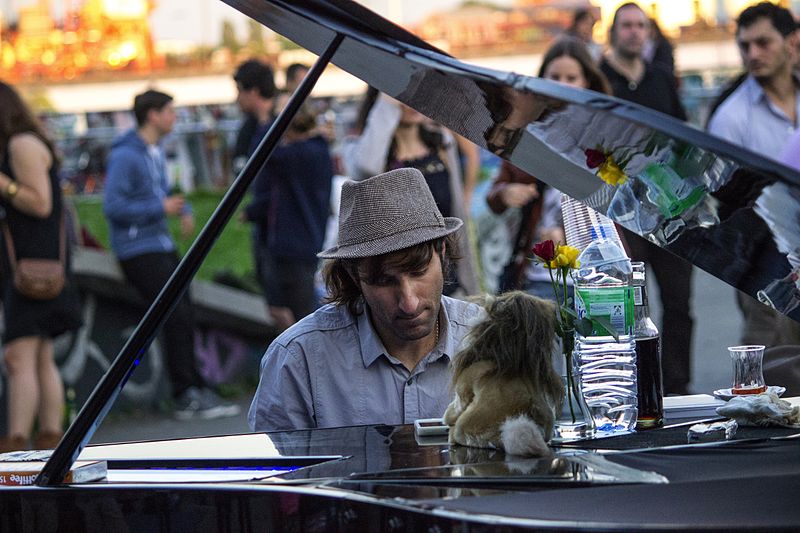