It can often be a major challenge to bring classroom music and classical music together. Often the perception from students can be that the music from the classical world is inaccessible and so far removed from today’s musical tastes, that it has become ignored in favour of other genres of music.

Many students do study instruments and voice and have learned pieces from the classical repertoire for fun or examination. What I am going to include in this article is a broad selection of classical works that are certainly worth presenting to students in a contextual and fun way.

Classical Music for The Classroom

This engaging piece of work by the English composer Benjamin Britten was the backbone of many music lessons many years ago. It was written, as you can guess from the title, to introduce the orchestra and its variety of instruments to young people. The British Ministry for Education, as it was once known, asked Britten to compose the work that they were to use for an instructive film called ‘Instruments of The Orchestra’.

Britten is perhaps better known for his substantial and innovative contributions to the world of 20th Century opera, but this orchestral work is amongst his most accessible and popular. Britten chose to base his ‘guide’ on the work of the late Baroque composer Henry Purcell. He chose the Rondeau from ‘The Moor’s Revenge’ (Abdelazer) that comprised ten pieces that were incidental music to an adaption created by Aphra Behn. Britten uses the Purcell theme to begin his own piece, passing it through the various sections of the orchestra by way of an introduction to those instruments: woodwind, brass, strings, and percussion. The closing section is full orchestral finish in a splendid neo-baroque fashion.

Many of Prokofiev’s works are brutal soundscapes that reflect the world in which he lived. Peter and the Wolf could not be further away from the harsh realities of early 20th Century Russia. It is a piece Prokofiev designed and wrote specifically with children in mind.

Commissioned by the director of the Moscow Central Children’s Theatre, the work was composed in 1936 along the line of a symphonic piece just for children. Like the Britten composition, Prokofiev carefully crafted the piece to introduce the instruments of the orchestra to a younger audience.

Underlying the whole piece is a darker political message. Prokofiev re-wrote the initial text to incorporate Peter catching the wolf that in itself illustrated important Soviet traits such as the mastery of nature, bravery, and resourcefulness.

Peter and the Wolf is scored for a full orchestra plus a narrator. The narrator guides the listener through the tale of Peter and the instruments of the orchestra create the characters of Peter (string quartet), the Wolf (french horns), the Hunters (woodwind, trumpet and percussion), the Bird (flute), the Duck (oboe) and the Cat (clarinet). Prokofiev beautifully captures the essence of these characters and cleverly combines them into an engaging piece.

3. ‘Carnival of the Animals’ by Camille Saint-Saens

Alongside the two works above ‘The Carnival of the Animals’ has become a firm favourite in classrooms across the world for many years. It was completed towards the end of Saint-Sean’s life in 1886 and show the composers’ remarkable ability to depict the characteristics of animals in music.

The orchestra (all be it a very slimmed down one that includes a glass harmonica), features in this composition very much like in the Britten and the Prokofiev with the one exception that two pianos take the central role. This almost makes the piece feel like a double piano concerto and the music is certainly not easy to perform well.

Carnival divides into fourteen continuous sections that include such exotic animals as a Kangaroo, Wild Asses and even Fossils. Given the popularity of the work now it is difficult to understand why Saint-Saens wrote toe piece for private performance only, insisting that the music should not be published in his lifetime.

By way of an introduction to the world of Classical music the music of one of the most famous composers ever, ‘Eine kleine Nachtmusik’ can offer a comprehensible way in. It also can give students the opportunity to listen to the sound of strings from violin and viola to cello and double bass.

These days this modest piece is often performed by far grander forces than Mozart had originally intended. The piece, completed in 1787, was titled ‘Serenade No. 13,’ in G major. Four movements complement each other beautifully and capture the more mature style of Mozart. It begins with an Allegro, then a Romanze, a Minuet and finally a Rondo. It is the opening movement that is perhaps the one that is played and listened to most commonly with its characteristic rising arpeggio opening. The Romanze is also a popular piece to listen to and to try to play.

Composed between 1804 and 1808, this symphony is one of the most played of all Beethoven’s works. As a window into symphonic music for any classroom, this is a must. The themes are compelling, especially the opening four-note motif that is supposed to represent fate knocking at the composer’s door.

Like many symphonies of the time The Fifth is constructed in four substantial movements: Allegro con brio; Andante con moto; Scherzo, Allegro, and Allegro. The opening movement exemplifies ‘sonata form’ although Beethoven’s treatment of this form is in many ways unconventional and ground-breaking.

The second movement is a movement dedicated to Beethoven’s most notable form; variation. The third movement moves the key back to C minor after the warmer Ab major of the Andante, followed by the Finale in the glorious and triumphant tonic major (C major). Even though the movements are separate there is the distinct feeling that Beethoven conceived of the symphony as a single, organic entity that paved the way for many great symphonies to come. 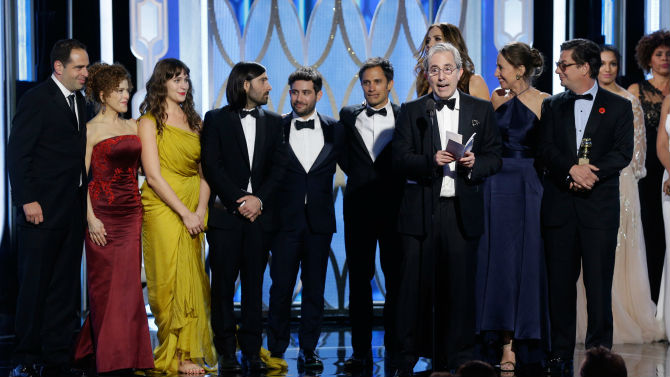 Angelica Frey - Jan 12, 2016
What a victory for what started off as a simple memoir about the debauchery within an orchestra. Mozart in the Jungle won in all...

How to Learn Jazz Guitar at Home by Yourself? 5 Methods...