A new report has found that Britain’s orchestras are expanding the number of people they reach with their music. But this has not prevented a deterioration in their financial position. 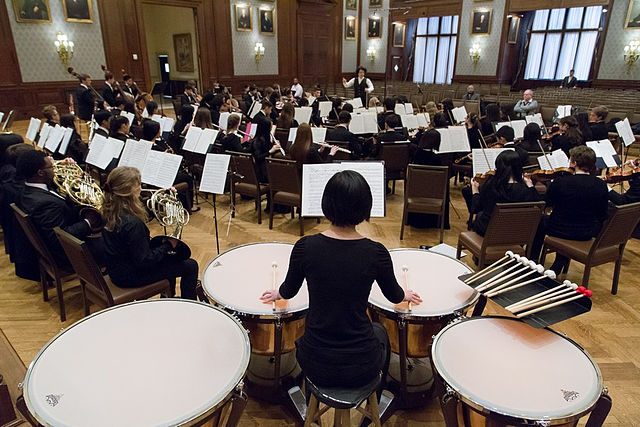 A timpanist’s view of an orchestra. Image credit: Wikimedia commons

In 2016, orchestras gave 7 percent more concerts than three years earlier, while audience numbers, at 5 million, were up 3 percent. The number of children attending concerts increased by 35 percent during the same period.

84 percent of the Association of British Orchestras’ members completed the survey. These orchestras made 42 trips to foreign countries during the year.

However, income was down 5 percent from 2013. The biggest cut to income came from local authority funding, down 11 percent, followed by support from the Arts Council, down 7 percent. Earned income was also down 5 percent.

ABO director Mark Pemberton stated, “These larger audiences do not bring in more money and, if anything, actually increase losses. Many of the achievements have been fuelled by audience development initiatives such as discounted ticketing, free concerts and fixed fee performances at open air events.”

The main message from the ABO was that orchestras cannot continue to do more for less.

Funding difficulties are not just a problem faced by orchestras in the UK. Last year, a series of strikes by musicians at orchestras across the US developed in opposition to plans by management to cut their pay in order to reduce costs.