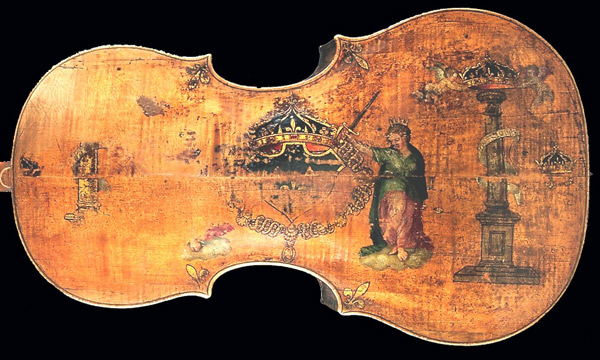 The Metropolitan Museum of Art in New York displayed the oldest cello in the world for several months last summer. The Amati “King” cello, produced by Italian instrument-maker Andrea Amati in the mid-16th century, is so-called because it was part of a commission for King Charles IX of France.

The cello is normally hosted at the National Music Museum in South Dakota. It is one of the few Amati instruments still in existence. The instrument was painted in the style of Limoges porcelain, and like all instruments belonging to the royal court, carried the fleur-de-lys emblem of the French royal household. Amati designed the cello as part of a larger group of 38 stringed instruments ordered by Charles.

Sets of decorated instruments were often gifted in the 16th century as diplomatic offerings for special occasions. The “King” was, as Andrew Dipper writes, “a member of a larger family of instruments of fixed measurements related together by profound mathematical, geometrical, and acoustical relationships of size and tone, which gave the set the ability to perform, in unison, some of the world’s first orchestral music for bowed strings.”

The cello carries images of two figures, which stand for piety and justice, and a letter K standing for Charles (Karolus). It was joined on exhibition last summer in New York by an Amati violin from 1560, and an Amati viola on loan from the private collection of Sau-Wing Lam. 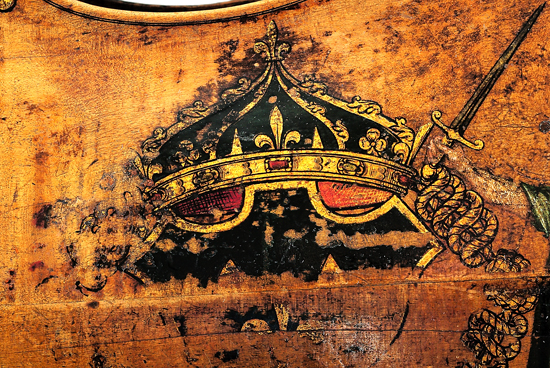 Amati, born around 1505, is considered the father of modern violinmaking. He made major steps forward in improving the design of violins, including through the development of sound-holes, and through his sons and grandsons, his family continued to have a major influence on stringed instruments over the subsequent centuries. Amati established five different-sized instruments in the violin family: the small and large violin, small and large viola, and a larger bass instrument we now call the cello.

The city of Cremona became an important centre for stringed instrument making. Antonio Stradivari, whose violins are considered unsurpassed in quality three hundred years after they were made, served his apprenticeship in the Amati workshop in the middle of the 17th century.

It remains unclear how many cellos Amati manufactured during his lifetime. Currently, three are known to us. The National Music Museum also houses two Amati violins, dated from 1560 and 1574, which are said to be in excellent condition and retain their original dimensions.

The “King” cello has undergone some changes since leaving Amati’s workshop sometime in the mid 16th century. As it was designed for court life, the original design became obsolete in subsequent centuries. After the French Revolution in the late 18th century, the cello was altered to make it more suitable for modern concerts in 1801. This included repositioning the neck to enable it to cope with more tense strings, and the instrument was cut down to a smaller size. Another interesting historical piece, the only violin by Stradivari to be returned to its original baroque design following modification, is also located at the Met’s museum.

Well over 400 years since it was made, it continues to impress violinmakers and musicians today. James McKean, who has been making instruments for forty years, wrote last October in Strings Magazine on his visit to see the “King” at the Met, “my first impression of the cello was not one of seeing an old friend, but of how modern it looks. Looking at the viola by Andrea Amati in the next case, and then the violin just beyond, only served to reinforce the feeling that they could have been made today.”

The University of South Dakota, where the National Music Museum is based, has a page on its website devoted to the instrument where you can view it from various angles. You can also watch a brief clip of a demonstration of the cello. The museum also has the world’s oldest playable harpsichord in its collection, an instrument made around 1530, which has recently been restored.