Tatyana Smolyaninov was in New York recently when she came across a piano sitting in the street. She asked a man standing nearby if she could play.

“It doesn’t matter where the piano (is), when I see the piano, I always ask to play,” she told the Winnipeg Free Press. “I’m originally a piano teacher, I’m playing since I was six, so for 39 years already. There was this very nice guy with a dog and I said, ‘Whose is this piano, and can I play?’ He said, ‘Of course’, and I just had to play it.”

Smolyaninov, a teacher at the Gray Academy for Jewish Education in Winnipeg, performed a wonderful version of Manfred Schmitz’s Jazz Etude and a crowd quickly gathered.

But the music gained an even wider audience after someone shot video of her and uploaded it online. Smolyaninov’s performance has already been viewed millions of times.

The piano belonged to Dotan Negrin, known as the man behind the Piano Around the World project. Negrin takes his piano and dog to different locations to perform, and has completed tours such as driving from New York to Costa Rica with his piano in tow. 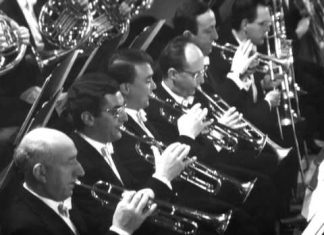 CMUSE - May 29, 2016
In 1966, Leonard Bernstein and the London Symphony Orchestra gave a sensational performance of Stravinsky's "Rite of Spring" for BBC Television. The venue was...

7 Really Sad Piano Pieces That Will Make You Sob