I have often felt that trying to figure out exactly what makes a composition have lasting appeal and to be considered good, is like trying to explain a funny joke. Once you have disassembled the parts of the joke it no longer seems to hold the humor it did before.

The same can be true for a composition. It is perfectly possible to analyze any piece of music through a variety of methods to get behind the notes in an attempt to gain a deeper understanding of what makes the work good or great, only to find that there is still some element you cannot account for.

Whilst a thorough analysis of any composition will, if executed skillfully, show the structure, harmony, melody, rhythms, textures in the music it is not enough to be able to grasp the complete essence of the music. It seems that the composition is greater than the sum of its parts.

The same challenge can be applied to almost any creative art that requires or is open to human interaction and interpretation. Why, for instance, is Da Vinci’s ‘Mona Lisa’ such an iconic painting? Why does the ballet ‘Swan Lake’ appeal to so many people? What is it about ‘Impression, sunrise’ by Monet that has held so many art lovers enthralled for decades?

Is it simply enough to state that you like or do not like a piece and leave it at that? If this approach is adopted then there is a risk of minimal objective evaluation, supplemented instead for personal opinion. This is not a productive way forward.

There has been a considerable amount of writing that surrounds the concept of the perfect composition. Some suggestions point towards certain structures in music that reflect the natural world.

I am referring to the idea of the ‘golden section’ which is a proportion or ratio that can be observed to occur in the natural world. The ratio of the golden section is approximately two-thirds to one-third. It is suggested that as a result of this natural division in nature including it in the structure of a musical composition can lend its appeal.

In a practical sense, this often means that the climax of a piece of music ‘should’ be roughly two-thirds of the way through the music. If it were a 32 bar Jazz Standard then the 20th bar would be the key point. On a larger scale, Beethoven’s Fifth Symphony is regularly attributed with having this ratio as are many of the works of Debussy, Satie, and Bartok.

To try to assess the quality of a composition on a single, speculative aspect of it presents a shallow outcome. The structure of composition surely does have a bearing on how we feel about the piece but simply because it may align to a certain natural ration is not a foolproof method of creating a good composition.

What it perhaps highlights is that we as listeners have a tendency to feel these proportions and are somehow instinctively anticipating the placement of the climactic moments at these times in the performance.

The same may be true of harmony too. Tonal music, up until the late 19th Century strongly orientated around tonic and dominant harmony. This is not to say it was in some way limited by these two chords but that these served as harmonic markers for the piece; points of gravity.

Broadly speaking, a piece composed in a certain key will always return to it to conclude having quite possibly traveled a great harmonic distance from it. What seems to happen to us as we listen is that the ‘home key’ becomes lodged in our memory. Even though the music moves and develops through a host of modulations, we are always unconsciously waiting for the return of the original key.

When this happens we feel a release of the tension that has built up during the performance and possibly even a sense of well-being that we are likely to associate with a good piece of music. We may not be aware of the technical processes involved in the composition but we have the possibility of a natural response to it.

An interesting example of this is in the music of Wagner. The Prelude to Tristan and Isolde is a remarkable piece for many reasons but the way in which Wagner treats the harmony highly skillful. Wagner is able to maintain a nail-biting level of tension as even though the piece is tonal such is the saturation of chromaticism that we become harmonically disorientated.

We long for the return of the home key but are constantly denied it until Wagner eventually releases us from the torment. This in truth really only occurs at the end of this four-hour opera when Wagner finally sounds a gloriously rich chord of B major.

I have often heard people say that a good piece of music has a melody you can sing easily. If you can sing it you will probably remember it and that is in itself enjoyable. It is certainly true of the majority of the popular tracks written today that the song is highly repetitive with a melody that covers a range of notes that falls within most people’s vocal range.

Add to that a compelling rhythm track and you probably have the makings of a hit. This perhaps goes some way to explaining the appeal of composers like Vivaldi, Handel, Schubert, Mozart, and Beethoven, all of whom composed music that was almost immediately memorable.

Think of ‘Winter’ from The Four Seasons, or the opening motif of Beethoven’s 5th Symphony. The dividing factor between these classical pieces and the popular music songs is that the classical composers then go further with the musical material; beyond the simple statement, to development. This can bring a feeling of satisfaction to a composition too as it feels as if the composer has fully explored the ideas and tied up the loose ends before concluding.

In the end, the final judgment can only be with the individual. It is a question of taste perhaps and certainly expectation and experience that leads us to decide whether a composition is good, bad or otherwise. 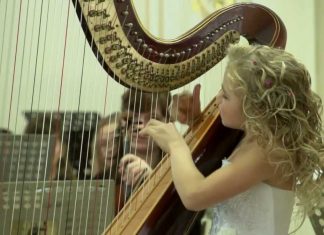 This Little Angel Playing the Harp Will Make You Feel Better...

CMUSE - May 6, 2015
Young Russian harpist Alisa Sadikova is a truly gifted girl. She began playing the instrument at 5 years old and was immediately able to play...