There is a dual focus in this article. On the one side I am going to explore the concept of a piano’s ‘action’ and later look in detail at what ‘time signature’ means in music. Firstly then let’s take a look at what is meant when the word ‘action’ means when applied to a piano. A piano is a complex piece of musical machinery with thousands of moving parts that collectively create the sound of the instrument and the mechanism by which we can play it. Many aspects of this mechanism have altered radically since the first piano was made in the 17th Century by the Venetian inventor Bartolomeo Cristofori. These include how the instrument is manufactured as well as the materials that are used in contemporary pianos.

Early pianos differed greatly from their predecessors like the harpsichord because instead of the string being plucked to produce a sound, the piano used small hammers to strike the string and make it ring. When we consider the ‘action’ of any piano it is this aspect of the production of the sound that is key. It is also about what precisely happens when the pianist depresses a key on the piano keyboard; how this mechanism functions to create a tone.

Cristofori developed an action that became known as the ‘single-escapement’ action. This represented a major step forward in the creation of the piano, radically altering the sound of the instrument and allowing for a much more flexible and expressive set of performing possibilities.

The single-escapement action meant that once a key was played, the hammer attached to that key’s mechanism would strike the appropriate string, then withdraw even if the key remained depressed. This is a very important part of the apparatus as without this function the hammer would remain touching the string and effectively stop the string vibrating.

By the 1800’s Erard had developed this original idea further into what became the ‘double-escapement’ action. The advantage of this development was that it allowed for the rapid repetition of any note without the need for any of the parts of the mechanism to return to their original resting state.

Yamaha pianos like many contemporary piano manufactures have furthered this remarkable feat of ingenuity and engineering to create their own highly praised version that includes around thirty individual parts that constitute the piano’s action. For more detailed information about Yamaha piano action, including an animation that neatly illustrates these points please follow this link: http://www.piano.christophersmit.com/actionDetail.html

As you might expect Steinway Pianos also have their own unique piano action that was inspired by the American pianist and inventor Josef Hoffman who challenged the manufacturer to make the most responsive piano possible. This gave rise to what is now called the world-famous Steinway ‘accelerated action’ which is a feature of all modern Steinway pianos. What it offers the pianist is a responsive piano that works to the subtle touch of every individual. It also means that the key repetitions can be achieved at very high speeds with Steinway’s claims that the ‘action speeds’ are 14% faster at fortissimo and 6% faster at pianissimo.

Nearly every contemporary piano manufacturer now boasts their bespoke piano action, each claiming to be distinctive and exclusive. It certainly makes a huge difference to how a piano feels when you begin to play it and for many pianists, the action even within the same brand can vary significantly. Ultimately, the kind of action you prefer is up to the individual but ought to have a degree of gratitude to the inventor of the instrument without who there would be no discussion or piano.

Whether you are playing the piano, singing or performing on one of any number of instruments you are likely to need to understand musical ‘time signatures’. If you are already a reader of Western notation, or even perhaps if you are not, you will in all probability have seen two numbers at the start of the five-line stave. These numbers come in a bewildering variety of combinations from the common time signature of 4/4, through to the less typical 12/16.

In essence, what a time signature is there for is to tell the performer how many beats there are in the following bars. It can change at any point in the piece and in contemporary music frequently does, but until that point, the time signature at the start holds true. The good news is that the concept of a time signature is not fundamentally a complex one but it is an essential part of reading, analyzing and performing music.

The top figure of a time signature always indicates how many beats there are in each bar. If you see 4/4 then you know that there are four beats in that and the following bars unless you see a new time signature that shows a change. It is perfectly possible to have any whole number as the top figure to the point of it becoming quite absurd. Consider for a moment the idea of a 245/4 time signature; unusual and in all probability unnecessary.

This leaves us with the remaining need to explain what the bottom figure shown in the time signature means. It is slightly more complex to grasp but does to an extent show one of many links between music and mathematics. If we consider the most commonly used time signature of 4/4 again the bottom figure tells us that the four beats in each bar are crotchets or quarter-notes.

Here, in many ways, the US system makes more sense as you can see that there are four quarter-notes in each bar as the time signature actually looks like a fraction. Following on from that principal then 4/8 is four quavers of eighth-notes in each bar; 4/16 is four semi-quaver or 16th notes in every bar. Another important division of the bar is 4/2 which would indicate four minims or half-notes in each bar. More information as a chart available here: https://hellomusictheory.com/learn/time-signature-charts/

Finally, it is possible to have additional and more complex time signatures such as 16/32 giving each bar 16 demi-semi-quavers. You might also come across irregular time signatures like 11/8, 7/8, 5/4, 7/4 all of which you can now work out for yourself. With practice, it will all make sense quickly and help you explore a greater variety of music in the process. 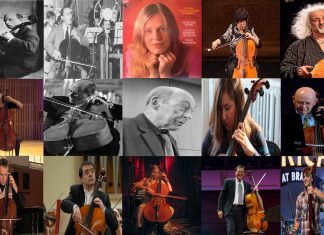 CMUSE - Jan 19, 2018
https://www.youtube.com/watch?v=RNTDhbQ4WlI Feel free to Subscribe to Our YouTube Channel if you like this video! The cello is a staple in any orchestra; classical music would not be the...