A violin carved out of a cigar box by a German soldier during the First World War is soon to go on exhibition in Dresden, Germany.

The instrument was constructed by Oskar Thiele on the Western Front in 1915. Thiele carved parts of the instrument using a pocket knife and also built a wooden box in which it was stored. On the back of the great violin, the inscription of the cigar manufacturer can be seen, as well as an inscription from Thiele noting, “manufactured in the trenches on 18 February, 1915 at St. Souplet by Oskar Thiele.”

“The front on the Belgian border was probably a very unpleasant place at this time,” explained Gerhard Bauer from the Museum of Military History. “In the area in 1915 there were major French attacks which failed bloodily. The area of Saint Souplet was repeatedly fired upon, we know that from contemporary combat reports.”

Jan Kindler, who tried out playing the instrument in this radio report, noted that it sounded “surprisingly good for a cigar box.”

Thiele survived the war, although not much is known about his life. He gave the instrument to a local musician, who kept it until their death in the 1980s.

The violin will be placed in the Museum of Military History’s permanent exhibition as an example of the items used by soldiers in their daily lives. Museum officials also suggest it could be played at events dealing with music in world War I. 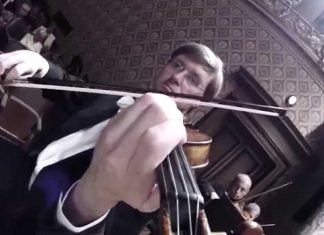 CMUSE - Nov 24, 2014
It’s always nice to see orchestras trying to embrace new technology to build more of an audience for classical music and the Czech Philharmonic...