While there is plenty of pictorial evidence depicting Wolfgang Amadeus Mozart—as a child sitting by his piano and as an adult wearing his signature red jacket, for example — the “visual” documentation concerning his wife Constanze might be even more interesting.

In fact, she appears on one of the first daguerreotype photographs ever taken: we can see her on the far left of a group photo featuring Swiss composer Max Keller, his daughter and the rest of his family. The photo was taken in Altötting, Bavaria, in the fall of 1840 when Constanze was 78 years old. She would die less than two years later in Salzburg.

As for the link between herself and Max Keller, he was a family friend from her second marriage to Danish diplomat Georg Nissen: in fact, she remarried after Mozart’s death in 1791, when she found herself raising a family on her own, and we have to thank none other but Nissen for keeping Mozart’s reputation alive through the 19th century, as he was the one who published his posthumous biography together with Constanze.

As it is quite common with this type of discoveries, some scholars refute the authenticity of the photograph. One of those is Agnes Selby, author of Constanze, Mozart’s Beloved. “Constanze Mozart was crippled by arthritis by 1840 and died in 1842,” she explained. “ There is absolutely no way she could have traveled to visit Maximillian Keller during the period when the photograph was taken. Contrary to the statements made in the newspaper, Constanze had no contact with Keller since 1826.” 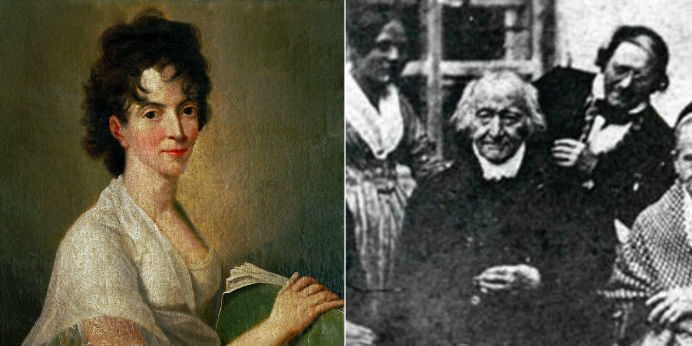 What do you think? Do you see any resemblance between Stanzie’s portraits and this photograph?