The sound of the cello expresses intimacy, warmth, fullness and is at the same time lyrical, tragic, epic and melancholic. How can all this be achieved?

Let’s take a peek inside the Barcelona workshop of master luthier Xavier Vidal I Roca, who, together with other luthiers, will show us how such an instrument is created.

We first see luthier Eduard Bosque Miñana taking measurements and then fit a steam-shaped curve to the developing instrument’s c-bout. Even though the luthiers expertly tinker with chisels, palette knives and similar tools and follow ancient designs, they try to express their individual creativity through the details. What’s more, despite the precise technique they showcase there is always a lingering mystery as to how any instrument will actually sound.

Of course, the documentary is not about sheer craftsmanship: music scholar Ramón Andres chimes in as well, stating that the way the cello, also known as the “king of all instruments” speaks to the human condition fully embodies “the modern consciousness.”

“I do not consider a craftsman to be less than an artist,” says Andrés, “I think that a luthier is a craftsman in his greater degree of expression.” 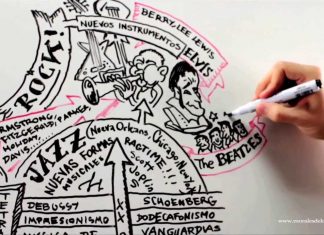 How Much Music History Can You Illustrate In Less Than 7...

CMUSE - Nov 8, 2014
Just like everything else, music too evolved through the ages and countless genres of music have been created through time. History has given us some...