Are you bored of playing the same local venues as everybody else?

From floating piano players to perform on top of the mountains, here are some of the most innovative and unusual music gigs we’ve discovered so far. They must be happening all the time, but all too often they are discovered well after the event actually occurred.

1. Voel is a musician passionate about pianos … he collects abandoned pianos, equips them with ingenious moving and floating devices, he even waterproofs some to be played underwater. His wacky pianos are constantly played by pianists from all over the world for a variety of incredible musical events.

2. Here is a street entertainer, a tightrope walker in Cardiff, the UK playing the violin suspended on a rope and balanced on one foot. Passers-by stop to listen and take in the spectacular but also show their appreciation by contributing some money. We only hope that his hat is big enough.

3. Researchers have discovered that babies feed and sleep better when they are sung lullabies. Babies who had their hearts monitored showed a significant slowing in their heart rate when they were exposed to the sound of lullaby singing which suggests that they find the experience soothing and comforting.

It is believed that when young babies hear music it is similar to the conditions they experienced in the womb and this is comforting to babies who are too ill to be lifted and held. Previous research in 2009 showed that when premature babies heard music their pain tolerance was elevated as this was demonstrated during routine heel prick blood tests. Source. 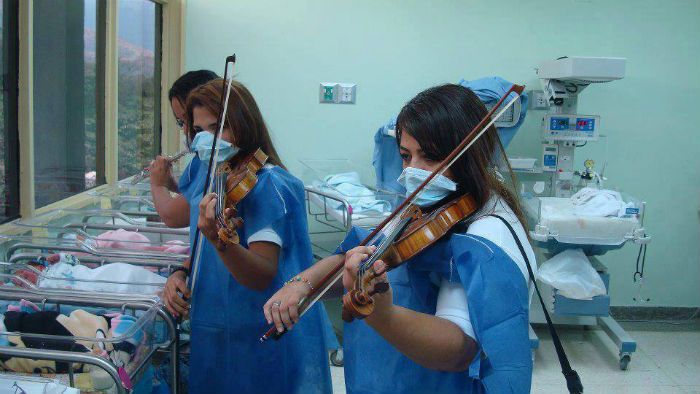 4. This is a photo of Cellist and fan of bears, Armen Ksajikian, putting on a concert for all the residents of Sitka, Alaska’s Bear Sanctuary. This is probably the most music these bears will ever hear, considering the sanctuary is a gigantic 3/4 acre decommissioned paper mill.

5. Ever heard of the Norwegian band, Adjagas? Us neither. But we do know that they performed a concert on top of Pulpit Rock, a rock balcony on the side of a mountain with a 600-meter drop below it. Few people like playing music this much.

6. Pianist Ricardo de Castro Monteiro plays the piano suspended from wires during the annual Virada Cultural event in Sao Paulo, Brazil, on May 6, 2012. The Virada Cultural offers 24 hours of uninterrupted attractions such as music, dance, cooking, theatre, exhibitions of art, history, and other forms of expression on stages around the city.

7. San Francisco is a beacon city for every type of street performer. One of them is Gary Skaggs who combined his skills as a craftsman and a musician and refurbished a trashed mini-piano he found and mounted it on a bicycle. He has christened his creation “St Frankenstein,” because it was brought back from the piano dead with pieces he scavenged from other instruments.

8. Because playing piano the regular way isn’t enough of a challenge…here’s Alain Roche performing at the Festival de la Cité Lausanne last year in a piece he calls “Piano Vertical.”

9. Here is The West Yorkshire Symphony Orchestra on a stage set up in the middle of the pool. They performed during the “I love West Leeds Art Festival 2011′, UK. And yes, they played Handel’s Water Music.

10. During August 10, 2012, Hot Air Balloon Festival in Vilnius, Lithuania a grand piano floated over the city. Don’t be fooled though, the piano isn’t really like the one you saw high above Sao Paulo, Brazil.

11. There is a music festival in the coldest part of Sweden, Swedish Lapland, where all bands perform using instruments entirely made of ice (except for strings, obviously). This festival, called Ice Music, started in December 2013 and it’s considered a celebration of the winter spirit, in a place that is a winter wonderland for the most part of the year.

12. Sagebrush Symphony – Orchestra members on the violin-shaped float, built for them for the Fourth of July parade in Burns in 1915.  The float was placed in a dense growth of sagebrush for the photo. 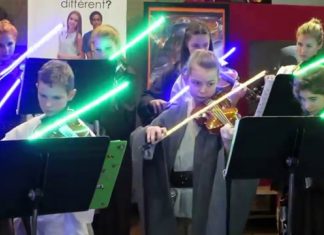 CMUSE - May 21, 2016
This is the coolest thing you'll see today. A group of students from the school Ecole de L’Harmonie in Québec city, Canada, helped by...