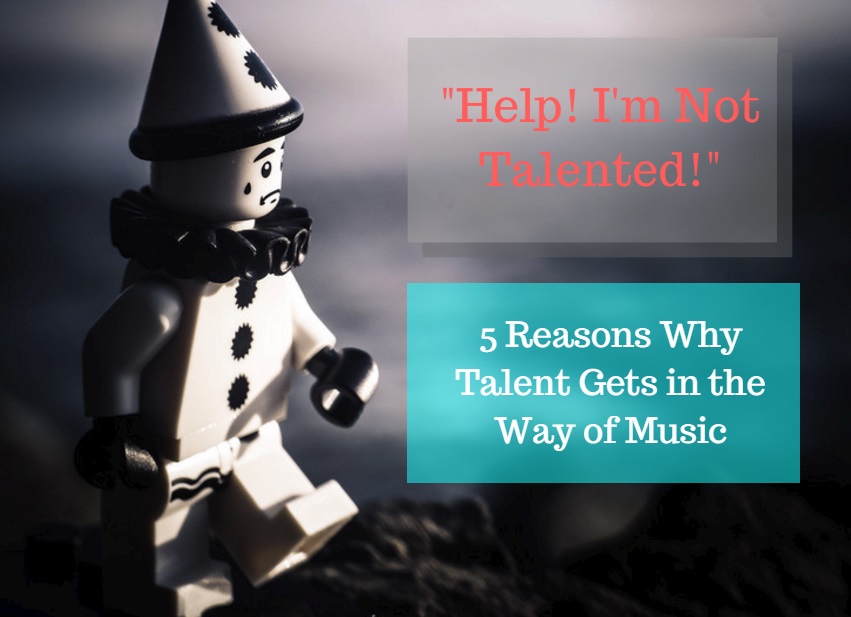 We’ve all heard the rhetoric. Maybe we’ve found the words fall awkwardly from our own mouths from time to time.

The effect is intended to categorize and separate people. You over there… me over here… depending on who seems to display more of that so-called “talent” or not. One place is on a pedestal. They call it a stage. The other is in a chair. A chair you slump way down into while you watch the other person up on the stage. “Talent” is a concept that has separated many a friend.

I don’t think this is what music is all about.

Music is a way that any human being can connect with any other human being, regardless of abilities and styles. Each person has a voice all their own to contribute, and something to teach whether they know it yet or not.

Stated simply, the idea of “talent” gets in the way of musical growth. Here’s how:

Some kinds of “talent” attract a “Wow” but little else. A person (or a monkey) can learn to put on a show and yet not have mastery over any of the elements of their show. They can learn one trick but it doesn’t make them a magician.  In the same way, don’t be fooled by someone who looks like they are playing an instrument. It is possible they have only learned to play a song.

I was amazed to discover that this kind of musical foolery was even possible. As a kid, I had a friend who liked to play Rachmaninov piano concertos. At a musical party, he played one, and immediately he was surrounded by other musical friends with music in their hands: “Play this, play this!” they requested. He turned down every request until someone finally convinced him to give one a try. He shakily struck the first chord but then it was nearly another whole minute before he was able to figure out the next chord. This was not sounding like a song. I peeked at the sheet music and it was no more than beginning level difficulty! Had he forgotten the basics? I thought basics were impossible to forget.  Then it occurred to me that maybe this was a case where the basics actually had never been learned.  It’s a kind of “talent” that is more of an illusion than a skill? As I went on to meet and work with many other so-called “advanced” musicians, it became clear just how many out there are taught to learn a few fancy songs like tricks, yet have no mastery whatsoever over their instrument or musical understanding.

Someone who has put thousands of hours into refining a skill may find it insulting to be called talented. “You’re so talented,” they hear time and again after every concert they put on. Not only do the words get old and dry fast; it’s that a hint of jealousy can be heard in the speaker’s tone. It’s a speaker who doesn’t understand what the performer went through; it’s someone who likely hasn’t discovered their own path to music yet, someone who hasn’t noticed how stained an accomplished musician always is with their own blood and sweat.

3. Talent is supposed to mean perfectionism.

I once watched a beautifully dressed teen sing with a song she’d written with her harp. Her hair was fixed so flawlessly that she didn’t move her head, and it almost looked like her facial expression itself had been painted on with makeup. She got a standing ovation and clicked her way offstage while someone else carried her harp for her. “What are you going to DO with all her talent, Dean?” I heard someone gush to the harpist’s father after the show. The father frowned and shook his head, looking down. “No, no,” he muttered, “This was no good. She does it better at home.” It was then that I noticed the harp girl was standing nearby. She was looking at the ground where her tears were falling.

This is the price of talent. We find it hard to recover from everyone’s expectations.

​
​4. The air of talent separates people instead of drawing them together.

Someone with an air of “talent” has a mind on themselves and how impressive they are, more than on drawing the audience into a great song. While music is something all people can do together, there is still often a great time for performing when most people want to listen and it’s your time to play. That’s when a wonderful responsibility is yours to involve the listeners and make them an interested, active part of the music whether they know it or not.

5. There are as many approaches to music as there are people.  (The “talent prerequisite” is a myth.)

Everyone has a natural ability of some kind.  Are you a strong communicator? Kinesthetically adept? Artistic? Detailed? These are all elements within music, and anyone can start from their strong point and improve from there.  Additionally, anyone can find the facet of music that appeals to their physically natural abilities and pursue that facet. For instance, an introverted, conscientious manager type may be best suited to compose for orchestra while a fidgety and outgoing person who is a good listener would do better as a fiddler.

Call ALL of the approaches “talent,” or don’t call ANY of them “talent” — it’s up to you.  But the illusion of talent being exclusive is a barrier.  And sadly, too many rely on this barrier as their excuse for NOT putting effort into music.

Shadow a child.  Children are eager to get their hands on an instrument and make a sound in the way that makes sense to them.  If they are forced into learning a specific instrument or method, sooner or later some adult will assign whether or not the child is “talented” in that narrow capacity, but without that assignment, the concept of talent is nowhere in the child’s mind.  The child will continue to pursue the making of music in the way that most encourages them.  It’s a perfect example of what we can call natural and enjoyable.

Find your approach and pursue it unashamedly.  Surround yourself with people who support your approach, understand it, and help you grow in it.

​Has the concept of “Talent” ever been a barrier between you and discovering a new form of music?  Feel free to share about your own journey toward musical skill in the comments below!

Please share this article so that others may be inspired to shed the barrier that “talent” can be.