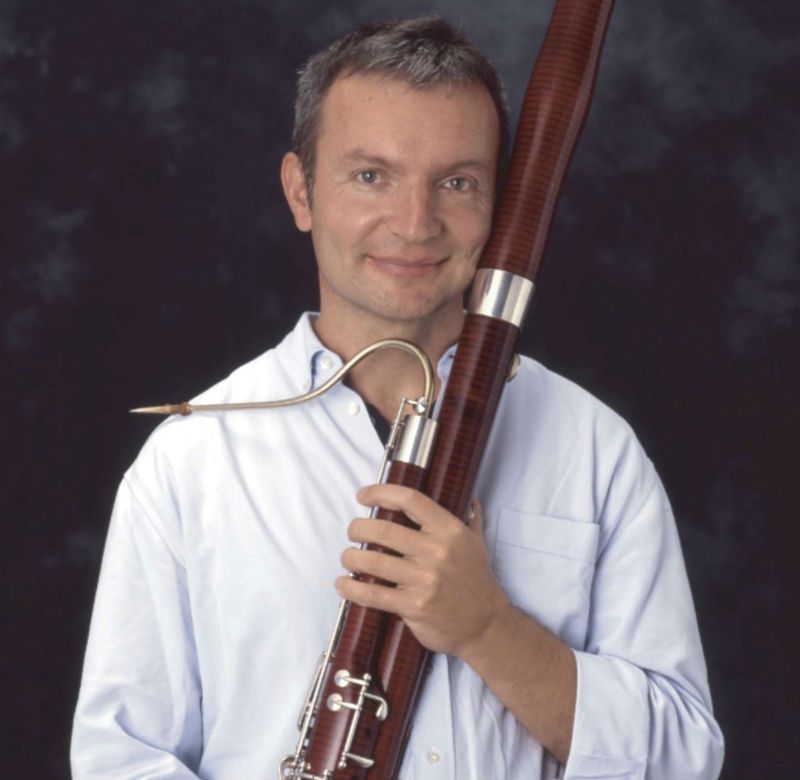 Valentino Zucchiatti (born 1961) was only 23 years old when he was chosen by Riccardo Muti as a Solo Bassoonist of the Scala Orchestra in Milano. His maestros include Vojko Cesar, Gilberto Grassi and Vincenzo Menghini while, after becoming a professional player, he perfectionated his technique with Bernard Garfield of the Philadelphia Orchestra and Brian Pollard of the Concertgebouw Orchestra.

Curiously, Valentino Zucchiatti studied Mathematics, Logics and Computer Science at the University of Torino. “[Mathematics] goes well with any artistic discipline and any physic phenomenon of the planet. Truth be told, there are two categories of musicians: those who are real Mathematic geniuses —Bach, for instance—and those who define themselves as “humanists”, who have no understanding of mathematics whatsoever,” he says about his academic studies.

When asked what his musical preference were, he gave us an extensive answer. “There are composers to whom I could devote my whole career in a monographical way: I’d say Bach, Mozart, Beethoven, Brahms, Tchaikovsky, Vivaldi, Händel, Schubert, Mahler, Shostakovich. I am not fond of American composers but there is hardly any musical composition I perceive as mere duty”, he told us.

Aside from being a solo bassoonist, he has a wide array of teaching experiences. The institutions where he taught include: the Hochschule für Musik und Tanz in Köln, the Conservatorium Maastricht, the Accademia della Scala in Milano, at the Milano Music Masters, the Palermo Conca d’Oro courses and the Furlan Bassoon Workshop in Udine, summer classes of Riva del Garda and Hamamatsu Wind Academy in Japan. He also gave masterclasses in the Universities of Tokyo Geidai, Stuttgart and Würzburg.

Amid all instruments, why the bassoon?

I think it would be more interesting to know “why music” in the first place, and then the bassoon. I was about six years old when I used to climb on a cupboard to reach for an old radio system with the magic eye, which turned green whenever I managed to catch a full signal. As i grew up in Udine, long waves allowed me to catch the signals of the radio stations of the Balcanic capitals where classical music always aired. I stopped there for hours, in enchantment. It was a necessity that I tried to sate every day. I grew up in a rural context, surrounded by people who might not have been literate, but they were never vulgar: they were honest, gentle, curious and able to appreciate beauty. Mine was a context where playing an instrument and being cultivate was considered a personal worth much more than being rich. When I was nine, my big brother took me to a free music class held by an elderly clarinet player whose enthusiasm was contagious. There I got a eureka moment: I understood the necessity to produce beautiful sounds, to use my body, my reflexes, my senses and my coordination and my nimbleness to produce that art I already appreciated on my own. By the age of nine, I could already recognize the styles, the great composers and some interpreters by just listening to them. At the age of 12, supported by the enthusiasm of my teachers, I decided to join the conservatory. I wanted to play the organ. However, in the administration office, I was basically laughed at as they explained to me that, for the more “noble” instruments such as piano, organ, violin, cello I would need multiple years of expensive private lessons that I could not afford. So I tried with the “get-one-foot-in-the-door-one-way-or-another” technique with any instrument so that I could shift seamlessly to my primary choice once I was already inside. There were seats in the French Horn and Bassoon class. I chose the horn because I knew it better. However, after I got my dental arcade examined my Horn professor took me to the bassoon professor. As you see, it was a series of random steps.

You are also a Maestro: what, in your opinion, are the best qualities of a music teacher?

He needs a solid experience and the will to transfer that to the pupils without restraints and with a contagious enthusiasm. He needs to understand what psychological type he is facing and that there is no “universal method.” The Maestro is a person who, beside touching the rational sphere by teaching notions and information, also touches the emotive and aesthetic sphere, and the corporeal one as well: he teaches relaxation and muscle suppleness, which are the fundaments of an optimal coordination. In Japan, for example, I am Valentino-sensei for my students, while, in social context, I am Valentino-san. The word Sensei entails respect, esteem affection and also has a spiritual meaning.

On a general note, how are the fine and performing arts treated in Italy?

Italy alone boasts 60% of artistic beauties of the whole world. Bocconi University published a study that explained how every Euro invested in the Teatro Alla Scala generates 2.7 extra euros for the city of Milan. As far as Music History is concerned, we come second after Germany, while for many, we come first. I am just saying this: Germany has 300 permanent orchestras for 80 million Germans, while the actual government of Italy—which largely consists of left-wing intellectuals, so Berlusconi has no part in this—tried to force the orchestra of the Rome Opera to disband. However, that orchestra is one of the fourteen permanent orchestras in Italia (pop. 60 Mln). What’s more, in Europe, Italy has the lowest investment rate in culture.

How would you characterize the “Italian way of making music?”

When Italians play an instrument—on a professional level—they are inspired by the art of song. They play naturally and with warmth, always looking for beauty and warmth in the sound. They use imagination and fantasy, and are normally very active interpreters.