Punk has made more of an appearance in the latest month’s reviews than anytime in the past. I think that’s a good sign.

Protomartyr isn’t your standard punk fair, both in sound, style, and experience. 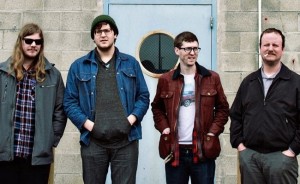 The Agent Intellect leaves a lingering flavor in your ears and mind after the closing note in each track. There’s the biting of anti-society attitudes found in tracks like Cowards Starve, and hope in I Forgive You. Self-reflection comes full circle on Ellen, a tribute song to his mother told from the perspective of his father, also deceased.

Frontman Joe Casey might not present himself as a polished punker with decades of anti-establishment under his belt, but he’s seen enough of society to know that it produces loss and heartbreak in vast quantities. The Agent Intellect is a respite from over-produced pop-punk iterations of what sold in the early 2000s and presents Protomartyr as the honest, down-to-earth punk band that we really are looking for.