This article is going to focus on that rarest of ensembles, Piano and Guitar. In fact, as you will discover if you read on, the grouping of Piano and Guitar actually travels back in time quite a long way. The compositional options available in this setting are wide and inspiring.

The selection of pieces below represents a small cross-section of pieces that I feel show-off the possibilities of this unusual ensemble and cross the genre divide in what I hope is an inspiring way. Some of the works are arrangements as opposed to original compositions for Piano and Guitar but of equal value in this brief survey.

1. 18 Pieces for Guitar and Piano (Selection of Five); by Diabelli

Anton Diabelli is perhaps known today mostly for the set of variations that Beethoven wrote on one of his themes; The Diabelli Variations. Diabelli was in fact, many things and in his time best known for working as a music publisher and proofreader. He was also a good amateur pianist and guitar player. This goes some way to explaining the somewhat rare set of 18 pieces for Guitar and Piano above.

The pieces are a delightful, light collection of compositions that are typical of Diabelli’s style. They include Marches, Allemandes, a Polonaise and Minuets. There are also some pieces with more gentle tempo markings that show the expressive, lyrical side of Diabelli.

Piazzola is probably one of the best known and popular composers to emerge from Argentina. His output includes an impressive amount of music that reflects his cultural heritage, including some wonderfully diverse tangos. There is a spicy, often melancholic tone to many of Piazzolla’s compositions and this piece is not an exception. This piece comes from a selection of pieces that Piazzola called ‘The Four Seasons of Buenos Aires’.

It draws some inspiration from Vivaldi’s own ‘Four Seasons’ but has its roots firmly in Argentinian soil. This is moody and at times sentimental composition, full of contrast and expression. The feeling of winter is ever present but in great contrast to that of Vivaldi’s. Never the less, the magic that Piazzola weaves here is compelling.

Boccherini was like many composers, a great recycler. This pair of compositions were not originally conceived together but when Boccherini made the wise decision to do so he created one of his most popular compositions. The Fandango and Introduction come from his String Quintet in D major (G. 448), from 1798 which was in itself a re-working of two earlier String Quintets.

Boccherini shows us in this amalgam, his almost tireless ability to create beautiful, effortless melodies that seem to capture the elegance of the age. Such is the popularity of the work that there are numerous arrangements of it including a very credible one for guitar and orchestra.

4. Rondo Number One by Mauro Giuliani

Giuliani is probably not a name heard very often these days but in his time he was considered to be one of the finest guitar players of his age. His talents did not stop there. Giuliani also was a fine singer, cellist and composer. Whilst living in Vienna Giuliani developed a taste for the classical style and conventions of the day and he associated in the very highest social circles of Austria.

This composition is a brief but effective work that provides an easy insight into the work of this Italian composer. Giuliani wrote a substantial amount of guitar works and to a great extent, these form a central part of the 19th-century repertoire for the instrument.

This work is an arrangement of Schubert’s famous Sonata in A Minor (D.821). The original work was composed by Schubert for an instrument that is all but lost to us now; the ‘Arpeggione’. This instrument really is a guitar that is played with a bow. The transfer of this opening movement to the guitar is quite a natural one.

The tempo marking for the movement is ‘Allegro moderato’ and finds Schubert in a wistful mood. In contrast, the second theme has more forward momentum and lifts the pensive mood. Even if you are unfamiliar with the sonata, the initial melody will almost certainly be one you will recognise.

Carulli was a late starter to the guitar. His initial studies were on the cello and only at the age of twenty did he move to the guitar. Largely, Carulli was a self-taught guitarist as there were few teachers in his home city of Naples. His unique style of playing the guitar transferred to his compositions and brings with it a certain sense of his affluent start in life. This Duo is stylish, witty and a fine example of the talent that Carulli possessed.

I am including this work as a final composition for the article as it offers a stark but fascinating contrast to the other pieces above. Claude Bolling wrote this Guitar Concerto as a way of solving a compositional dilemma of blending a coherent combination of Spanish traditional music and Jazz. Bolling was a master of pastiche and many of his compositions are dedicated to notable fellow jazz musicians. This concerto is an engaging fusion of Baroque, Jazz and Spanish music presented in the form of seven ‘character pieces’.

The section called ‘Invention’ is where you can hear the Baroque influence. Bolling also clearly indicates the diversity of inspiration in the titles of the pieces like, ‘Hispanic Dance’, ‘Mexicaine’, and ‘Serenade’. There is a distinct bluesy flavour to the music that contrasts effortlessly with the 5/4 rhythms of the Hispanic Dance. There is something in this concerto for everyone and the above performance is noteworthy in its own right as it has George Shearing on piano.

Yamaha FG 420 Overview: Is It Worth The Price?

Where Are Eastman Guitars Made? (Answered)

Johnson Guitars Review: Is It Worth The Price? 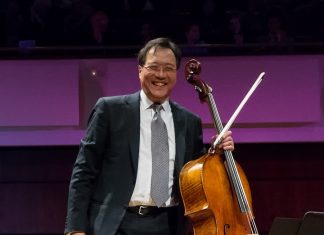 CMUSE - Oct 5, 2017
Yo-Yo Ma Biography He is considered a child prodigy. Achieved a wide success as a recording artist and cellist. Meet the incredible and inspiring...