Without a doubt, the music of Mozart has a universal appeal that has endured for centuries. His reputation as a child prodigy, a virtuoso performer and the composer of his age is as far as many Mozart fans delve, and perhaps this is fair enough. Enjoy the music as it arrives at the ear without the need to dive beneath the surface to uncover aspects about Mozart that do not necessarily align with the sublimity of his compositions.

Unless you have taken the time to read through the numerous letters of Mozart it is unlikely that you would make the link between scatology and the great Austrian composer. Scatology refers usually to an individual’s obsession with obscenity, often related refereed to today perhaps as toilet humor. This tendency is not so much spoken as used when writing and it is in the letters of Mozart that we can learn about a completely different side of the man’s character.

The play and later the Film (1984) titled ‘Amadeus’ by Peter Schaffer, also brought the more vulgar aspect of Mozart to the notice of his adoring public.

The play centers around the rivalry between court composer Salieri and Mozart as told by the aged Salieri from his cell where he is encouraged to confess to the murder of Mozart. Whilst the story is contrived, the parts of it that show Mozart’s love of the obscene is based on fact and makes for an uncomfortable feeling when reflecting on the purity of his musical voice.

Scatology and Mozart is not news. There have been generous numbers of scientific studies devoted to trying to discover why Mozart’s exhibited scatological tendencies but to the present day, there has not been a single conclusion drawn. Mozart was an avid letter writer and so much evidence of this condition is available. It would appear that Mozart did not restrict his toilet humor to Salzburg friends but very much directed it towards his small cousin who may have shared the same fascination with obscenity. One would imagine that Mozart’s Father would have escaped the fouler words Mozart wrote, but he was often the one who received the most. This is not to say that his letters to his family did not contain sincere feelings and sentiments, they did, but that the profanity seems to stand out as an odd feature of his writings.

To place these letters in context is a challenge. We do not adequately know about the humor of the day, nor whether Mozart had had these types of lude jokes with his family for years. Were they simply used to the wordplay and toilet humor. Leading scholars of the 18th Century make it abundantly clear that scatological tendencies were not singled out for reproach in German culture of the time. The theatres of the day often put on plays that contained strong language even by today’s standards.

Mozart’s letters to his cousin Marianne were not what we would consider pleasant or even funny today. He writes in one letter, “I wish you good night, shit in your bed all your might.” If you find this surprising consider that Mozart also added a sprinkling of humor into his lesser celebrated compositions. One titled ‘Leck mir den Arsch fein recht schön sauber’  or in English, ‘Lick me in the ass right well and clean’ might not seem in keeping with a composer of such standing and apparent genius.

The catalog number is K.231. It is thought by some Mozart experts that over 39 of his letters contain profanity but he was not alone in his obsession with the scatological. It appears that letters written by another member of Mozart’s close family contain equally frequent scatological passages. Once again, this would indicate that perhaps this type of humor was not as overtly offensive to people of Mozart’s time; they were just sharing a joke.

Other works scatological in content include Bona Nox (K. 561)

The first is an impressively structured canon in four voices. It includes some of the colorful sentiments contained in some of his letters and it is assumed that Mozart wrote the words to the canon himself. The less savory words aside, Mozart does demonstrate his gift for language in K.561, employing Italian, French, English, German, and Latin. The later work is also for voices, in this case, three unaccompanied singers.

Again, the general impression is that Mozart supplied the words to this later period work, composed somewhere between 1786 and 1787. Even though Mozart wrote the words in Latin, the intended fun happens when the Latin is mispronounced. When this happens then the Latin becomes closer to some choice German phrases that are scatological.

The joke continues as Mozart knew who the lead singer at the first performance would be; one Bavarian baritone by the name of Peyerl. By all accounts, Payerl had some issues pronouncing certain Latin words and Mozart was fully aware of this effect on his music. Needless to say, the first performance resulted in much hilarity most probably at the expense of Peyerl.

There have been significant quantities of research on why Mozart may have had scatological tendencies but none have been fully conclusive. Amongst many proposed diagnoses is Tourette’s Syndrome. If the play by Shafer is to be held up as fact one could easily believe this of the Mozart character he portrays in his work. This is a work of fiction, however, and there seems to be inadequate academic support for such a notion. It may boil down to the fact that at the time scatological humor was commonplace.

Mozart is well known for enjoying games, especially language games as he was fluent in German, French, Italian, and Latin. Turning these games into musical compositions would have been amusing to Mozart particularly if the performances resulted in such fun. The letters to his family members are not just scatological, but often heartfelt, humorous, challenging, and full of inventive use of language that gives us another valuable window into the mind of Mozart. 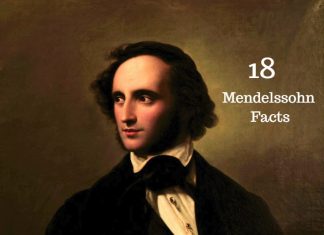 CMUSE - Nov 24, 2017
Here are the facts about the great composer – Felix Mendelssohn Bartholdy (1809 – 1847). https://www.youtube.com/watch?v=xbIKyvlUQx4 Feel free to Subscribe to Our YouTube Channel if you like this...