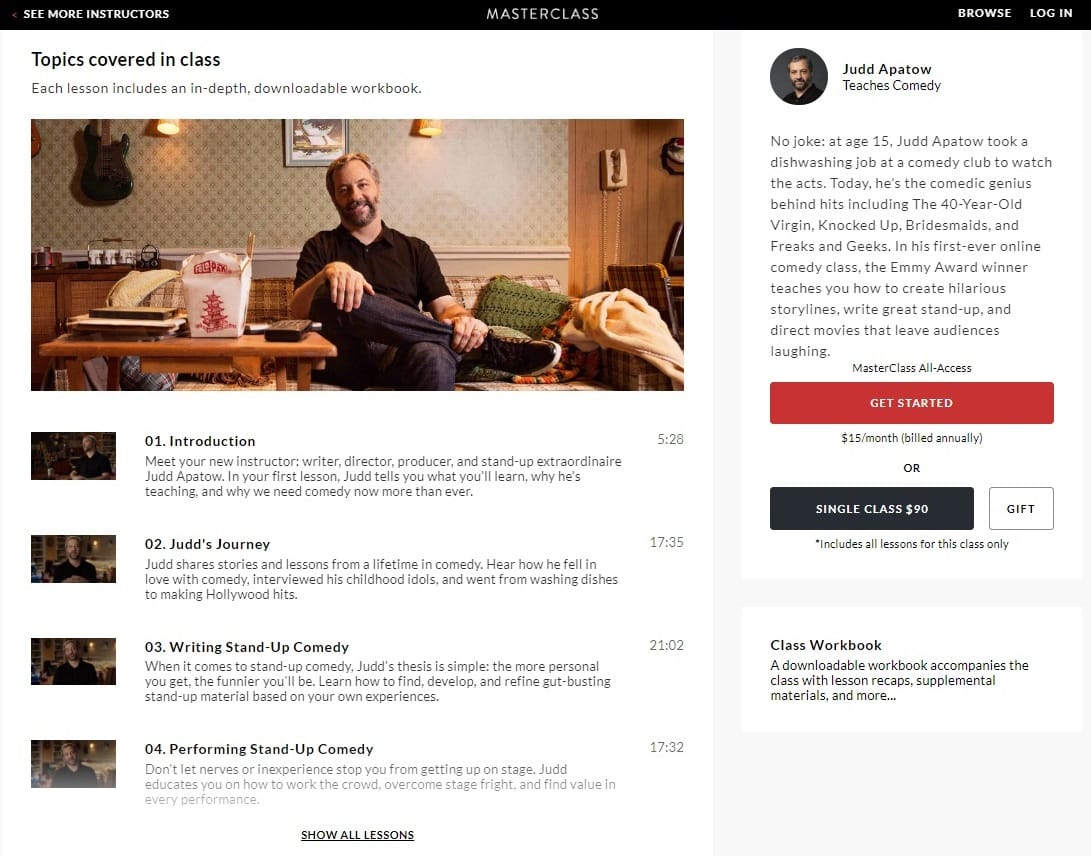 As you may have heard stated countless times, laughter is good for the soul. It has several health benefits too. For example, it is one of the most effective stresses and pain relievers. Other than that, a good laugh also does wonders for your immune system.

Comedy gives you a chance to belt outbursts of good laughter from deep inside. Based on this, it’s safe to conclude that comedy increases your chances of enjoying these benefits too. However, it takes a uniquely talented man or woman to be great at comedy.

The good news is you can be a hilariously funny comedian too. Moreover, you don’t even have to sign up for the nearest comedy school to do that. You can learn all that you want from the safety and comfort of your home. MasterClass offers you a chance of doing just that.

Do you want to help make the world a much healthier place? Then you should sign up for the MasterClass comedy lesson to cause your audience to laugh and reduce their blood pressure. Stimulate your audience’s mind too by cracking jokes that cause them to roar into laughter.

A good laugh is an excellent workout too. A superb comedian can help the audience to work out and be in wonderful condition mentally, emotionally, spiritually, and physically. Judd Apatow’s MasterClass lesson on comedy will empower you into greatness.

You may be wondering why attending a Judd Apatow Comedy Lesson on MasterClass should be a big deal. If you are, then you need to understand a few things about this American actor, filmmaker, and comedian. 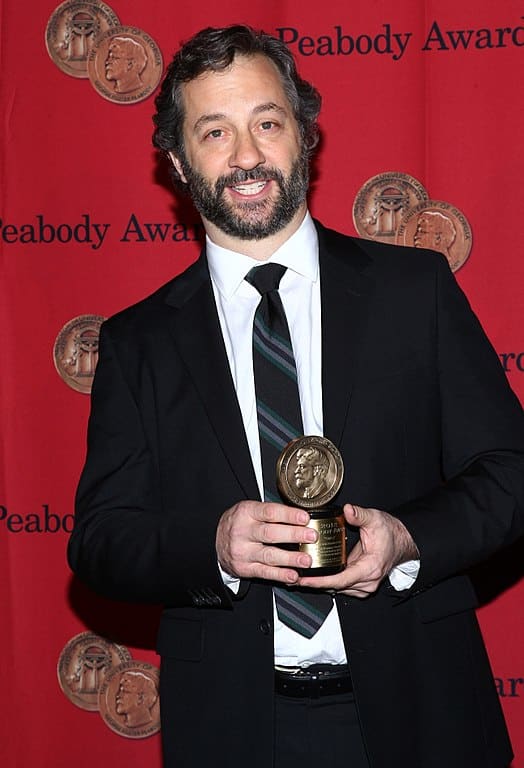 Yes, Apatow makes his living as a comedian. He also earns good money from his filmmaking and acting careers. More importantly, this clearly demonstrates that Apatow is in the business of using his prodigious talents to entertain his audiences around the world.

Thus far, he has done an excellent job. He has produced and written many sterling movies and television shows. Examples of these include Undeclared, Freaks and Geeks, Crashing, Funny People, The 40-Year Old Virgin, and Trainwreck, among others.

More importantly, the industry has rewarded him with plenty of awards, as recognition for the awesome job Apatow has done. He got an Emmy Award in 1993. Other than that, he boasts of five Emmy Award nominations. Oscar and Golden Globe nominations also define his career.

Other recognitions include the Critics Choice Award Nomination and Hollywood Comedy Award. A Herb Sargent Award for Comedy Excellence that he received from the Writers Guild East remains one of the comedian’s proudest achievements.

Based on all these awards, and a career that spans several decades, it’s easy to understand why MasterClass opted to add Judd Apatow’s name to its list of impressive instructors. You are guaranteed an experience like no other to propel your career to dizzy heights.

What the Course Entails

Before signing up for the Judd Apatow Comedy Lesson on MasterClass, it would be superb to get a handle on what the whole course entails. That way, you would know what to expect, thus being able to plan your schedule accordingly.

First, it’s worth mentioning that the MasterClass lesson is a journey into Apatow’s life and world. Through this lesson, you will be receiving a clear appreciation for the incredible creativity that defines Apatow’s life as one of the world’s top comedians.

More importantly, you also get the guideline that Apatow used in creating The 40-Year Old Virgin. He also offers you a chance to see his first draft when working on Knocked Up. His lesson is full of tons of original materials that you will never encounter elsewhere.

Furthermore, the Judd Apatow Comedy Lesson on MasterClass comes as a 32-lesson course. What is more, it’s available in short videos that you can watch to learn how to direct, produce, write, and perform different types of comedy for either film or television.

Moreover, you can look forward to a class workbook that helps you to gain the material that Apatow delivers from his many years of experience as a topic comedian. You can download the book to enjoy the lesson recaps, supplemental material, and assignments.

His MasterClass lessons touch on different topics, too. For example, you will encounter case studies. In addition to that, the lesson also teaches you scene deconstructions. Apatow also offers you practical insight through all these video lessons.

Curriculum for the Judd Apatow Comedy Lesson on MasterClass features the following: 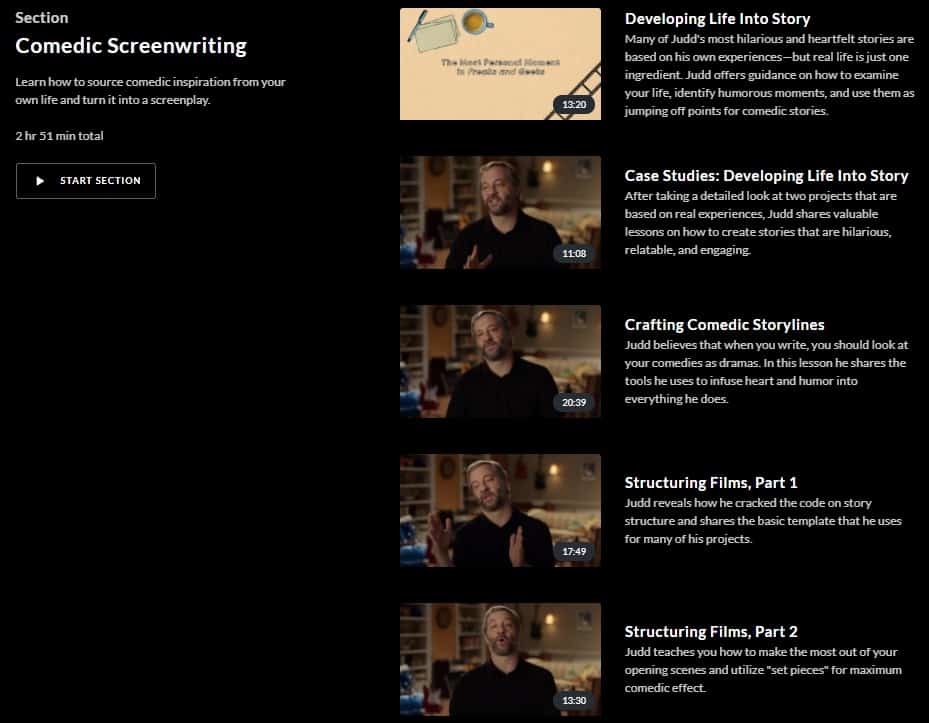 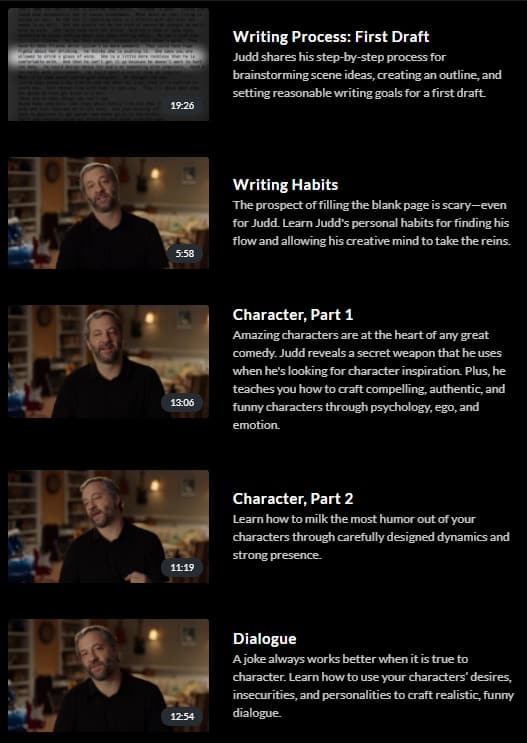 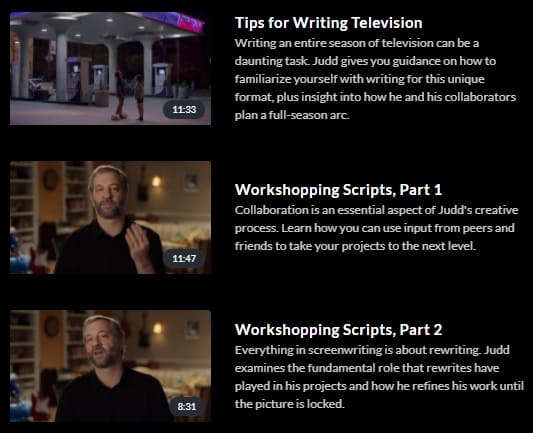 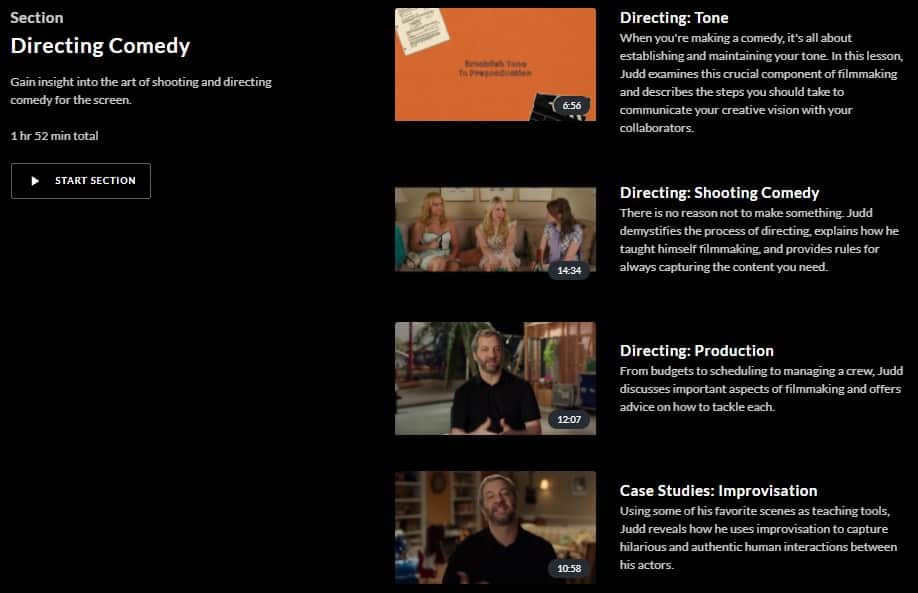 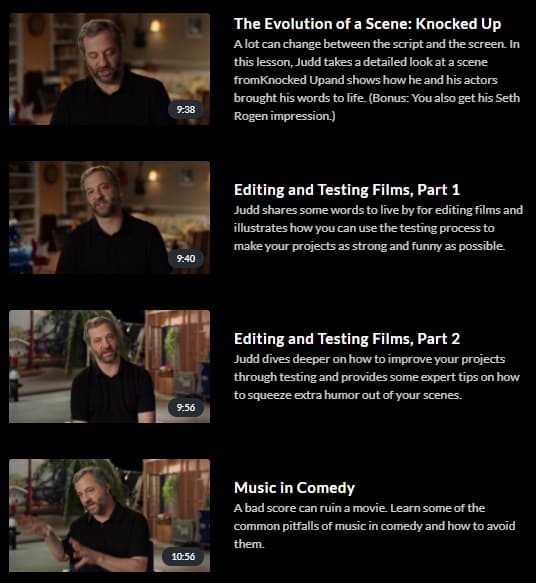 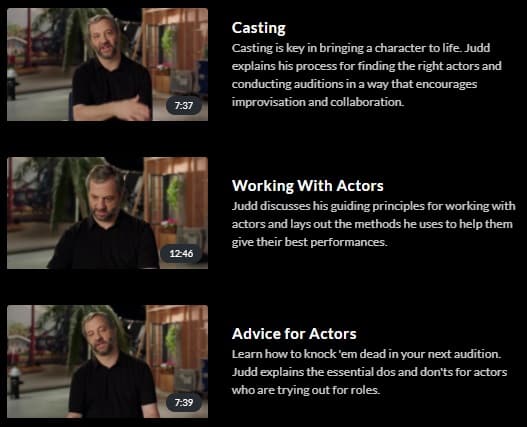 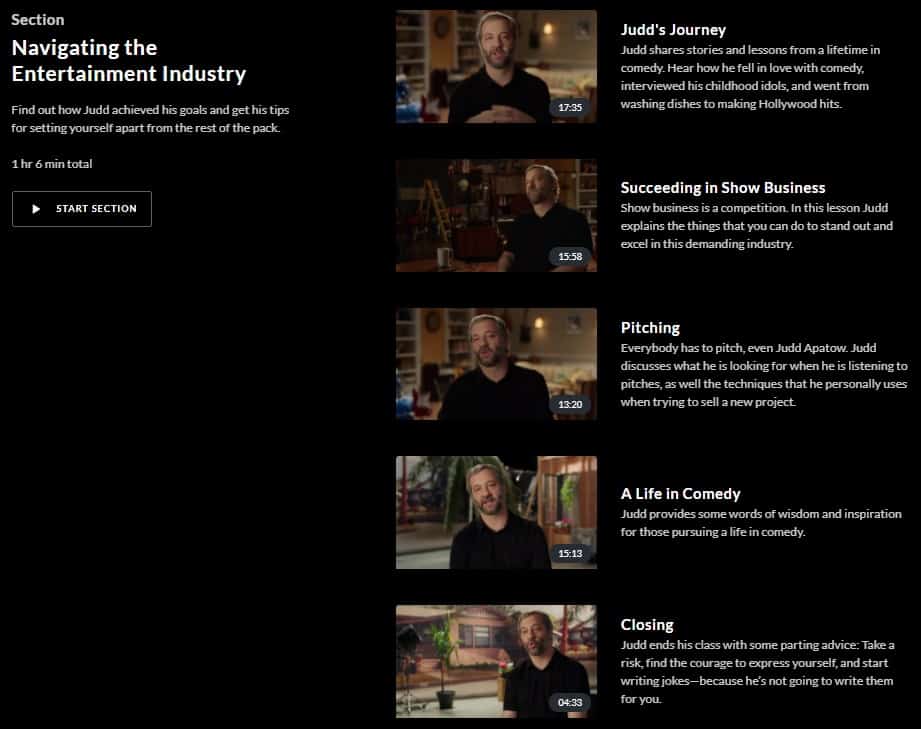 Is the Judd Apatow Comedy Lesson on MasterClass worth the money? Yes, it sure is! Here, you will learn from the best in the field. You will get your creative juices running in no time. More impressively, you will know how to prepare and stand out as a stand-up comedian.