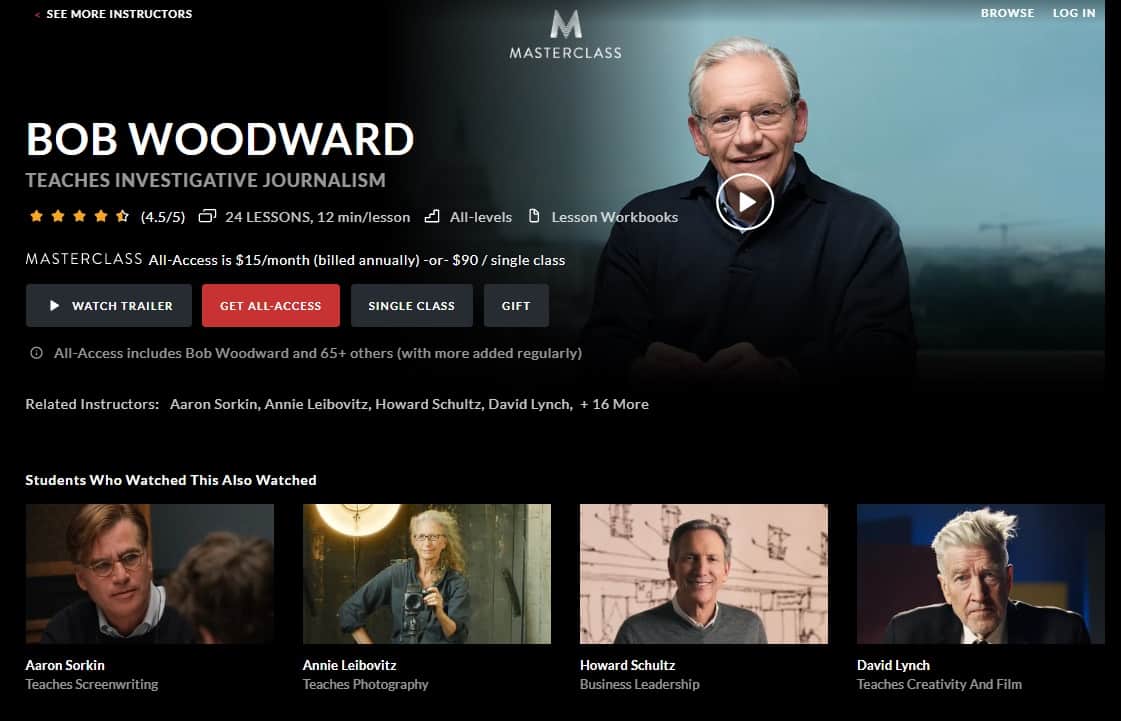 Are you an adventurous person? Do you enjoy delayed gratification? In that case, investigative journalism might be your calling. You might have to go through a period of intense training to equip you with all the tools the job demands.

Investigative journalists are the real deal. That’s the view of many people – across the board – who love the work this category of journalists do. They believe that journalists act as a watchdog. Journalists advocate and agitate for the public interest.

Many issues disappear from the limelight. Others fail to garner as much interest as they should. Politicians, leaders, and opinion shapers love to sweep some issues under the carpet.

Without investigative journalists, it would be impossible to unearth some scandals. Corrupt deals, kidnappings, and murders would go unsolved. Assassinations, shady, and shoddy deals would never see the light of day too.

Why the Bob Woodward MasterClass

The person the world has come to know as Bob Woodward was born Robert Upshur Woodward on March 26, 1943. Since then, the 76-year old American is now one of the world’s best investigative reporters. 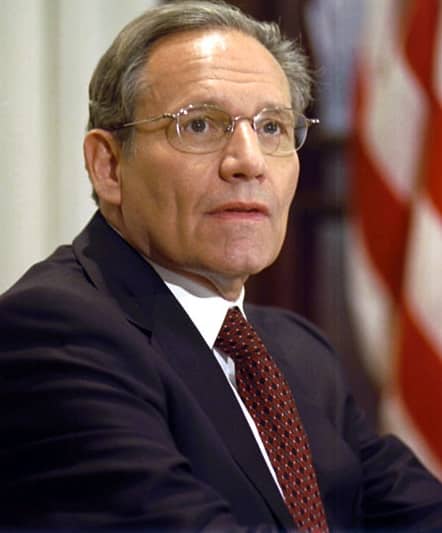 Since 1971, Woodward has worked for The Washington Post. Today, he serves it as an associate editor. Those who have never heard of him should search the Watergate Scandal.

Woodward worked with Carl Bernstein to bring the news. They uncovered all the hidden details too. Their investigative work led to many government investigations. President Richard Nixon had to resign from office.

Over the years, Woodward has built a formidable repertoire of excellent work. His work includes Jimmy’s World Scandal. Other scandals that he has investigated and reported with utmost professionalism include:

Without a doubt, MasterClass has once again chosen the best instructor. For this reason, you should not hesitate to register for the Bob Woodward MasterClass. As you do that, your investigative skills will receive a significant boost.

What the Bob Woodward MasterClass entails

The lessons show what Bob Woodward relies on for compelling investigative journalism. He also delves into the role that journalism plays in the world today. Woodward isn’t afraid to share the principles that guide him in his career, either.

He takes you through the process of finding the perfect story. Together with his students, he reevaluates and checks his interview with Donald Trump.

How does Woodward approach in-depth reporting? You will learn that and more through the treasures of this MasterClass. He also shares his perspective on the challenges of reporting the Watergate Scandal.

The Bob Woodward Investigative Journalism Lesson on MasterClass has a curriculum. It gives you a glimpse of what you should expect from the class and the instructor the moment you pay the $90 fee. The legendary reporter relies on a curriculum that tackles the following issues: 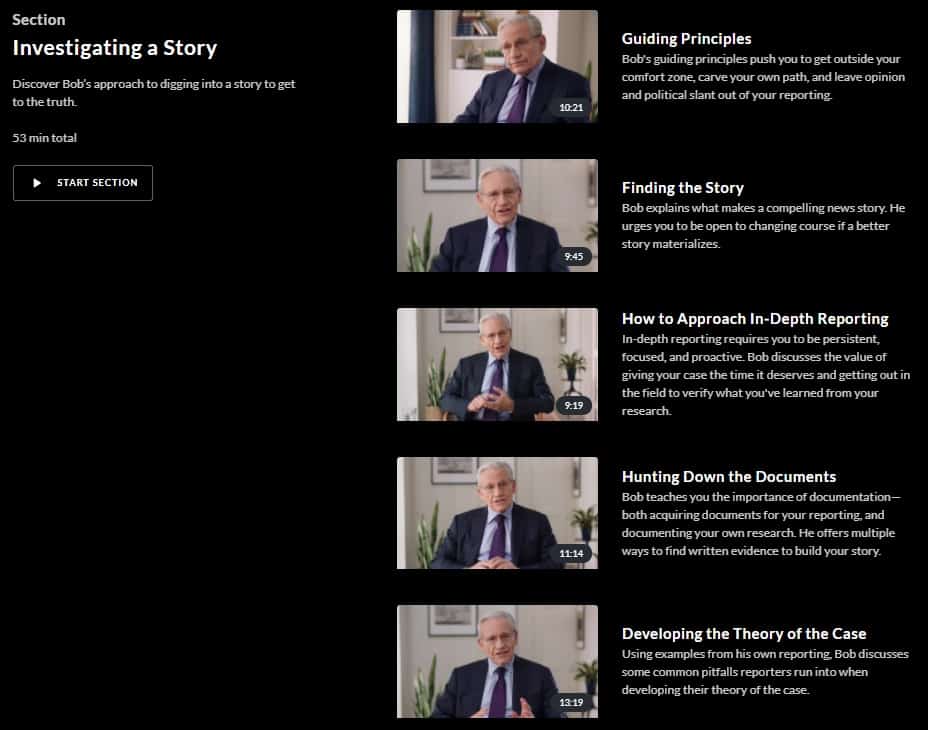 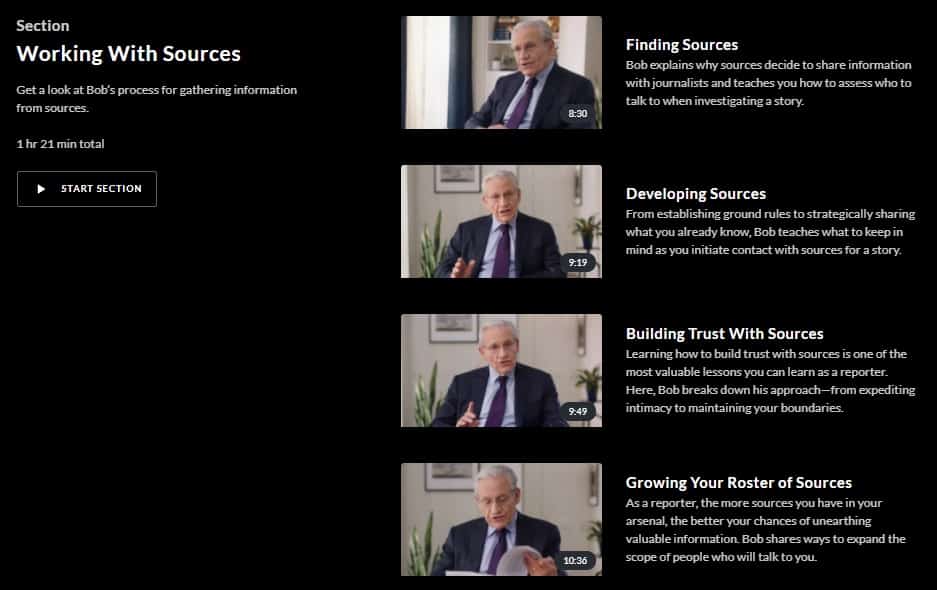 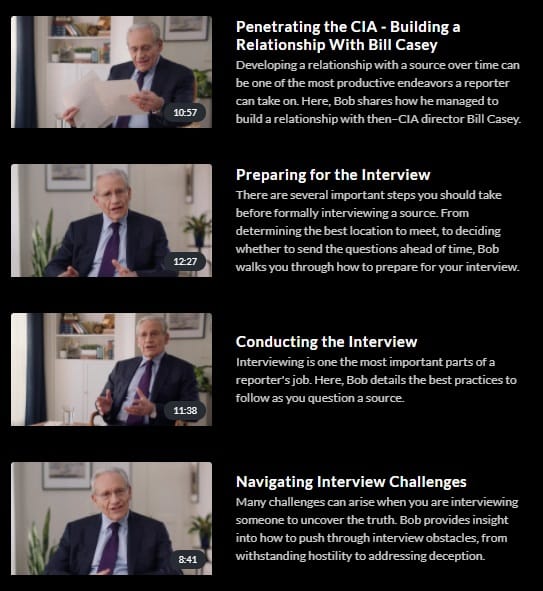 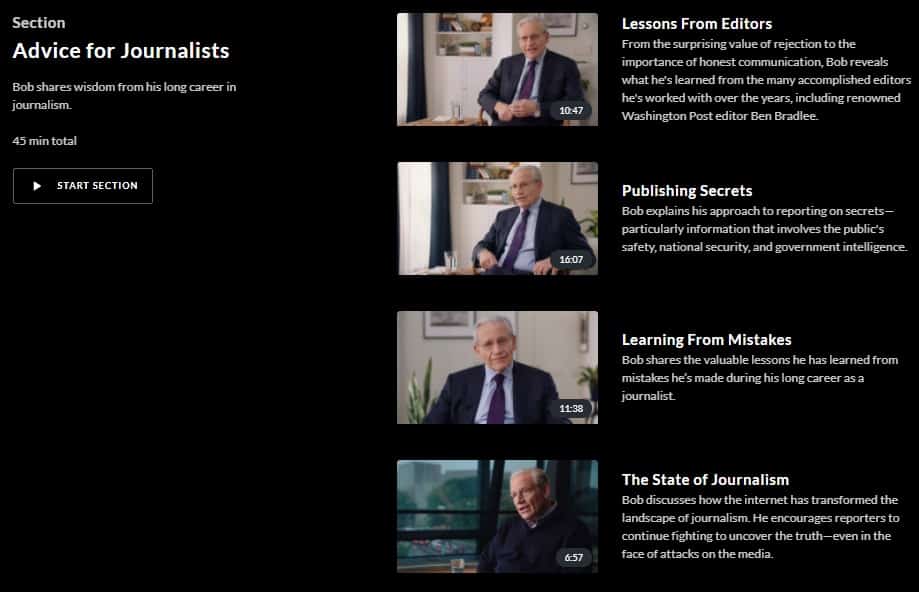 There is no harm in reiterating that Bob Woodward is a legend. Learning from him is an experience, unlike any other. He is full of wisdom. Take a glimpse into the factors that have made him one of the foremost journalists of the 21st Century.

The MasterClass is full of great content. It leaves you with packets of knowledge that you could then apply in your own life. The classes take you out of the comfort zone. They motivate you to embrace investigative reporting.

Students love the class workbook too. It offers a chance to recap the lessons you learned. It comes with tons of supplementary material and assignments also. Feel free to download the workbook to use it at your convenience.

The Bob Woodward Investigative Journalism Lesson on MasterClass is a masterpiece. Because of this, you would struggle to find flaws in it. The only probable defect is his reliance on his experience alone. He doesn't offer university-like teaching.

If you want to learn from the best, then you should register for the Bob Woodward MasterClass. In it, you will receive the enlightenment that transforms your career. You should take the entire class forthwith. Let the master educate you using his precious experience.