The aria “Der HÃ¶lle Rache” from The Magic Flute is known for its fast pace, its grandiosity and its hard-to-hit high notes: in fact, Mozart allegedly wrote the two Queenâ€™s arias of The Magic Flute to showcase the dexterity with the upper register of soprano Josepha Hofer, who originated the role of the Queen of the Night.

Northern Irish musician Matt Wilson rearranged the melody for the bass, and the result is what we are not afraid to define as â€œan indie rock baselineâ€ that sounds more somber and less irate than Mozart’s original.

Being performed on a bass, Wilsonâ€™s version does not cover the ariaâ€™s original ranges (from F4 to F6), and this has encouraged some criticism. “Dropping an octave for the high notes loses some of their effect. That high F should be a surprise played up by the neck. Otherwise very cool,â€ writes Reddit User David RFZ. 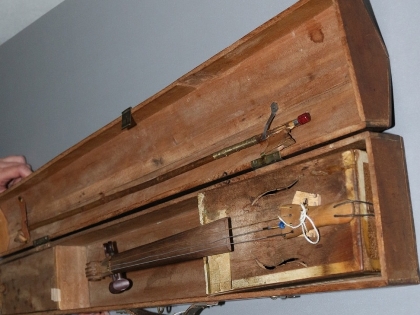 Jordan Smith - Dec 3, 2016
A violin carved out of a cigar box by a German soldier during the First World War is soon to go on exhibition in...

Yamaha FG-300 Guitar Review: Worth It?