Are you physically and mentally preparing to enjoy the epic Game of Thrones season 6 finale, titled “The Winds of Winter” (but where is the upcoming book by the same name??) wondering who will stand strong and who will die and/or join the army of the White Walkers?

If that’s the case, you will undoubtedly enjoy Broadway legend Kristin Chenoweth’s performance. The soprano who co-headlined the original Wicked cast alongside Idina Menzel is warming up her vocal chords, tuning her voice to the one and only legendary Game of Thrones opening theme.

While we heard countless arrangements of Ramin Djawadi’s popular tune, this one has a sense of ending and impending doom, especially if you remove the piano part. Wouldn’t it be great as the soundtrack to a very emotionally charged duel or the revelation of what exactly happened in the Tower of Joy? 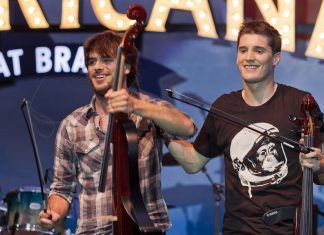 CMUSE - Oct 11, 2017
Introduction 2Cellos is a group of 2 trained cellists, Luka Šulić and Stjepan Hauser. This Croatian group was signed by Sony Masterworks in 2011. They are popular...

German foundation to pay €100,000 to compensate heirs for violin stolen...