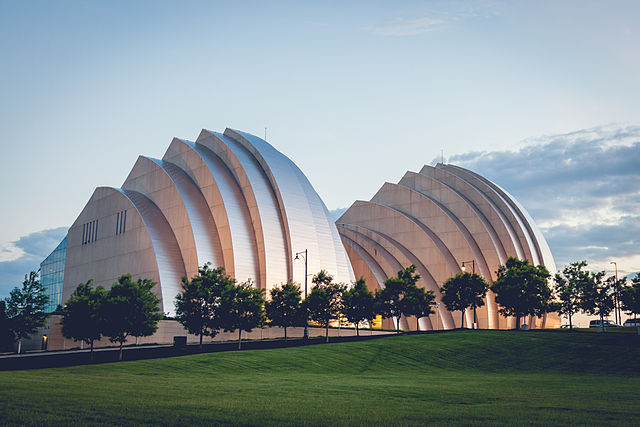 Kansas City’s concert hall, the Kauffman Center for the Performing Arts, started out as an idea and a sketch on a napkin. This uniquely shaped hall stands out from some angles as two large seashells, and from others, it resembles waves building on top of each other. This performing arts center was designed by internationally respected architect Moshe Safdie to be as functional as it is visual, and has become an architectural icon–home of the Lyric Opera of Kansas City, the Kansas City Ballet, and the Kansas City Symphony.

It was named in honor of a former Kansas City philanthropist and civic leader, Muriel McBrien Kauffman, who had envisioned a performing arts center in 1994. Following her death, the foundation bearing her name led the way for the center to become a reality under the guidance of her daughter, Julia Irene Kauffman.

The board selected Safdie as the architect who sketched the center on a napkin while attending a dinner with Kauffman. Richard Pilbrow, theater designer, and Yasu Toyota, acoustician, were also selected for the project. After getting the plans approved by city leaders and implementing a fundraising campaign, groundbreaking took place October 6, 2006. The center took five years to complete and celebrated its grand opening September 16 -18, 2011.

The center has two concert halls. In one of the shells is the Muriel Kauffman Theatre which is the home of the Lyric Opera of Kansas City and the Kansas City Ballet. It seats 1,800 and was fashioned after Europe’s great opera houses. The orchestra seats form a semi-circle surrounded by multi-level balconies and box seats. The 5,000 square foot stage easily accommodates full-scale productions but is also adjustable in height and width for small sets and ensembles. In addition to Kansas City’s own opera and ballet companies, the Kauffman Theatre is also used for visiting artists ranging from solo performers to Broadway shows.

Helzberg Hall is in the other shell and is the home of the Kansas City Symphony. The stage sticks out into the hall which allows for some of the 1,600 seats to be behind and along the side of the performers. Because of this design, the farthest seat from the stage is slightly more than 100 feet. As with the Kauffman Theatre, the Helzberg Hall stage is adjustable and can easily adapt to soloists, chamber ensembles and large orchestras.

Behind the stage, in the center in full view, is a custom-built pipe organ. This instrument was a collaborative creation between the Canadian organ builder, Casavant Freres, with architectural and acoustical input by Safdie and Toyota. The company is located in Quebec and, since its founding in 1879, has made approximately 4,000 instruments. It is considered one of the best pipe organ builders in the world.

The organ has 5,548 pipes ranging from the size of a pencil to 32 feet tall. Once the four-manual instrument was built, it had to be disassembled to move from Quebec to Kansas City. It took two months to install the 20,000 pieces that make up this organ. The Julia Irene Kauffman Casavant Organ, Opus 3875, is used for organ recitals, orchestral works with organ, and with choral ensembles.
The lobby shared by both venues of the Kauffman Center, known as Brandmeyer Great Hall, has sloping glass walls and a glass ceiling. The walls remain in place because of 27 steel cables firmly anchored into the building foundation and bedrock. The glass allows visitors a panoramic view of Kansas City.

The Kauffman Center stands out as a unique building in Kansas City and the performing arts. It has an array of events for everyone including children. The center annually provides opportunities for school children in the Kansas City area through the Open Doors Program. Funding helps with the costs of transportation and tickets. Students get reduced or free tickets to special matinee and regular performances.