You may remember that in January 2013, the artistic director of the Bolshoi Theater Sergei Filin suffered serious injuries after getting sulphuric acid thrown in his face, an attack that eventually left him a big gash on his face and compromised his eyesight. This unfortunate event sparked interest in what goes on behind the curtain of the famed Moscow institution, which, as we are repeatedly told throughout this recently released HBO documentary, embodies the spirit of Motherland Russia.

During the intro, the voiceover explains that the Russian words and exports best known to the world are “Bolshoi” and “Kalashnikov.” Unfortunately, many guns came after that–so the Kalashnikov was eventually slightly overshadowed–but there is still one and one only Bolshoi theater.

During this 90-minute long documentary, we learn that the employees do revere the institution, but that their devotion comes with a burden. None of the sources interviewed, including two ballerinas, a trustee and general manager, refrain from expressing their frustrations towards the politics that govern it. What emerges is a portrait of the Bolshoi as the ballet equivalent of Game of Thrones’ King’s Landing. Truth be told, we don’t see head explosions nor examples of sheer sadism, but, in the wake of the acid attack, we can all be sure that this Russian institution does not exactly mirror the enchanted sceneries it presents onstage.

The plights range from the aging ballerina who is a single mother and is not offered as many performances as before (“an older ballerina is not beautiful to look at”) to the general director Vladimir Urin, formerly at the head of the Stanislavsky Theater who recounts that, upon his appointment, his wife cried in despair. Urin, we learn, is also not really a fan of having the government intruding into the sheer artistic direction of the theater. On that note, a trustee openly wonders why he has to sit through half-hour meetings with government officials for ballet-related matters.

We are also offered some insight into Filin’s management. At first, the narration frames him simply as a victim of some envious rivals of his. Former fellow Bolshoi dancer Pavel Dimitrichenko was sentenced to six years of prison for ordering the attack. The motivation? Filin had not assigned the role of the Swan Queen Odette to Dimitrichenko’s girlfriend.

However, as we delve deeper into Babylon, we learn that Filin was not completely transparent with his operations (“You have to prove it,” he flatly tells HBO while listing all his alleged wrongdoings where corruption is the big protagonist ). For example, he terminated the contract of soloist and teacher Nikolai Tsitsiikaridse, who openly criticized his direction for soiling the Bolshoi’s repertoire of classics with contemporary works from abroad,  favoritism and bad taste. As a result, both Tsitsikaridze and his students were denied roles, docked pay and prevented from advancing their careers. Do not worry about Tsitsikaridze, though: he is now the rector of the Vaganova Academy in St. Petersburg.

Relationships with Urin are tense and strictly business-like. They were both at the Stanislavsky when Filin left to join the Bolshoi and, while Urin is all about transparency, advocating for reforms such as “every artist should be able to audition for every role they wish for,” Filin is literally portrayed as a “lord of whispers.”

At times, though, he displays some hints of (involuntary?) humor. Regarding an accusation of having slept with multiple ballerinas, he simply replies “I have been sleeping with my wife for ten years and she is not even a soloist. She is part of the corps.”

And now, some personal considerations: I admit it, I did learn a lot from this documentary, and I am sure that  those who see politics everywhere will love the fact that the action unfolds through words, whether they be an argument between executives or the anguish regarding the intrusiveness of the Russian government.

If you are into rivalry in the world of performing arts, we suggest The Price of Gold, which explores the feud between US skaters Tonya Harding and Nancy Kerrigan. If, on the other hand, you have a  morbid fascination with the regime of physical duress ballet dancers have to undergo, watch Bertrand Norman’s Ballerina. in Bolshoi Babylon, the B-roll showing ballet performances is fairly repetitive, as it rotates between the Bayadere and Swan Lake. 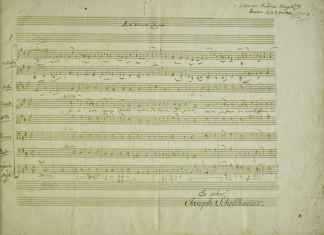 Dr Justin Wildridge - Mar 23, 2018
https://youtu.be/HXjn6srhAlY Even if you claim not to like the music of Mozart, after a single hearing of this sublime piece, I doubt whether anyone would...