Flight of the Bumblebee by Nikolai Rimsky-Korsakov isn’t an easy piece to master.  It’s known for its frantic pace when played up to tempo, with nearly uninterrupted runs of chromatic sixteenth notes. It is not so much the pitch or range of the notes that are played that challenges the musician, but simply the musician’s ability to move to them quickly enough. Because of this and its complexity, it requires a great deal of skill to perform.

Aside from the challenges this piece requires of the soloist, the accompaniment parts are also demanding. From the perspective of a section bass trombone player, it requires a tremendous amount of focus and concentration.

In case you didn’t like Mr. Rimsky-Korsakov’s use of space in orchestration, just to make you feel better, here’s a guy playing Flight of the Bumblebee on a rainbow tuba. 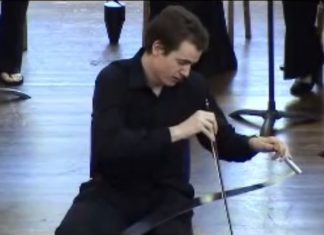 Angelica Frey - May 19, 2015
Spooky, but beautiful, right? Also known as “singing saw,”  the musical saw is capable of creating an ethereal tone very similar to the theremin,...