Truth be told, the first literary work that comes to mind when thinking about Wagner’s Ring is The Lord of The Rings: both reference Nordic mythology, both revolve around a powerful, dangerous ring, feature supernatural creatures such as dwarves and had a knack for fire (think of Mount Doom, the Magic Fire, the Ragnarok).

However, we are A Song of Ice and Fire die-hard fans here, so, between watching an episode of the show and listening to the Ride of the Valkyrie while working on deadline, we couldn’t help noticing a series of similarities between Wagner’s Ring and George R R Martin’s Saga. All we can say is that the Ring would make a striking HBO show, as it lacks none of the darker, sordid elements that made George R R Martin stand out in the realm of fantasy authors.

Wagner’s Ring cycle begins with the dwarf Alberich stealing the gold resting at the bottom of the Rhine from the rhine maidens (to whom he shot some lustful glances). The chief of the Nibelungen and the main antagonist of the whole tetralogy, he gains the power to forge the ring after the renouncing love, and we know what terrible events his actions set in motion. He also carries a tarnhelm, a helm that grants the carrier the power of invisibility and that was crafted by his brother Mime. His son Hagen is the one who eventually murders the hero Siegfried.

Even though less strictly “evil” than Alberich, Tyrion Lannister (indirectly) partakes of the dark nature of the Nibelungen as well. A supremely quick-witted, well-read and self-indulgent character, Tyrion Lannister is an actual dwarf who, because of his deformity, is shunned by his kin and is considered an outcast in the society he lives in. What’s more, even though he shows signs of great humanity towards characters like the (bastard?) Jon Snow and his child-bride Sansa Stark, he is by no means gold-hearted fellow the way, for instance, Tolkien’s Gimli used to be. At the end of A Storm of Swords (or Season Four if you follow the series), he cold-heartedly murders his father and then sets off to the Eastern Continent. George R. R. Martin himself singled Tyrion out as his favourite character. After praising his intelligence, he commented on his personality. “He’s also a very gray character,” he said in an interview with Science Fiction Daily. “All my characters are gray to a greater or lesser extent, but Tyrion is perhaps the deepest shade of gray, with the black and white in him most thoroughly mixed, and I find that very appealing.”

2. Both Wagner and George R R Martin feature Incest in their narrations

In the Walküre, while fleeing some enemies, Siegmund finds shelter from a raging storm in the house of the warrior Hunding. Since, however, the latter is not present, Siegmund is greeted by Sieglinde, Hunding’s unhappy wife. Hunding then arrives and offers him hospitality, and so Siegmund tells the couple his story, which also involves a long-lost twin sister. Upon hearing Siegmund’s tale, Hunding reveals he is is one of the enemies he is fleeing from and, even though he grants him a night’s stay, he schedules a duel for the following morning. Sieglinde is then forced to retreat with her husband, but she quickly returns, having drugged him. They speak further and they proceed to declare their mutual love for one another. However, they quickly come to realize that they are indeed brother and sister, but, regardless, Siegmund eventually calls her “bride and sister,” and embraces her with passionate ardor before the curtain falls at the end of act 1. Even the relationship between Siegfried and Brunnhilde is somewhat incestuous, as they are both related to the god Wotan.

Incest abounds in A Song of Ice and Fire. While the “golden twins” Jaime and Cersei Lannister make the best-known incestuous couple in the saga: they had three children together, they threw Bran Stark off a tower when they were discovered and, in A Storm of Swords and in Season four, they had sexual intercourse on their son Jeoffrey’s tomb, a sequence that, in the tv show, was made into a much-debated rape scene.
Other than the Lannister twins, house Targaryen pursued incest between brothers and sisters as a way to preserve the purity of their bloodlines: this resulted, for several Targaryens, into insanity. Aerys was known as the Mad King, Viserys did not have a full mastery of his wits and even Daenerys, in the latest book and season, started to become more and more like her daddy—both Viserys and Daenerys were sired by Aerys to his sister Rhaella. North of the wall, the wildling Craster takes his daughters as wives, and also weds the daughters he begets from them,

3. Burn Baby Burn: both series feature a lot of fire

Fire, which also comes with its own leitmotif, is heavily featured in Wagner’s Ring as a component of life: at the end of the Walküre, Wotan has a great fire surround the mountain top where he had condemned his unruly daughter Brunnhilde to sleep. Loge, the god of fire, appears as a small flame and assumes shape and height to block Brunnhilde from view. In the very last scene of the Götterdämmerung, Brunnhilde sets Siegfried’s pyre on fire, which actually mirrors the ultimate demise of the gods in the flames of Ragnarok.

In A Song of Ice and Fire and Game of Thrones, the motto of House Targaryen reads “Fire and Blood” and Daenerys Targaryen willingly walks into her late husband’s sfuneral pyre while holding her treasured dragon eggs. Not only does she survive the flames unscathed, but the eggs also hatch: subsequently, she turns into the “Mother of Dragons.”
Beside Daenerys, the “red priestess” Melisandre has a strong affinity with fire: in order to appraise the “Red God”  Rhllor, also known as the Lord of Light, she burns the statues of the Seven Gods, and, throughout the books, she has several characters burned alive. Her religion praises light, set to conquer darkness, but, at this point of the saga, its main purposes are still unclear.

Wagner’s Ring uses hundreds of Leitmotifs, whether they be related to characters, things, or situations. Examples include “Nature,” which portrays the depths of the Rhine as Urelement, “Freja as Love,” “Freja as joy”, “Walküren,” “Wotans Speer” (a full list of Leitmotifs of the Ring, complete with notation, can be found here).

Even though A Game of Thrones is not a musical work, the book employs point-of-view characters, with each one narrating their story through their own perspective and with their specific linguistic register. What’s more, each character has a recurring set of phrases he or she obsessively repeats throughout the installments. Jon Snow keeps being told “You know nothing, Jon Snow,” Daenerys thinks “If I look back, I am lost,” Tyrion asks himself “Where do whores go?” and, before going to sleep, young Arya Stark recites a list of people she wants to kill, ending it with “Valar Morghulis” (“All men must die”).

5. Whatever happened to the Damsels in Distress? 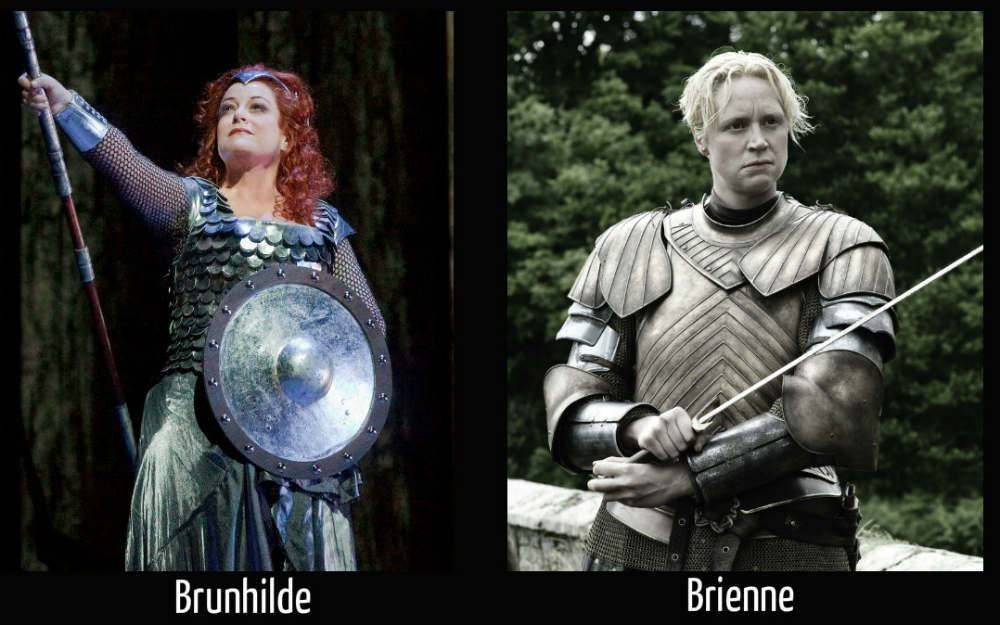 Truth be told, Wagner is no stranger to the gravitational pull of winsome, despondent heroines—think Elsa von Brabant, Elisabeth, and Eva. However, his body of work displays a wide array of strong-willed, assertive and complex female characters: the Valkyries, the nine daughters of Wotan and the goddess Erda, are responsible for carrying off the heroes of the battlefield and taking them to Valhalla, in a perpetual feast where the fallen heroes drink, eat and remember the good ‘ole times: in fact, the name Valkyrie means “chooser of the slain”. In the Valkyrie, Brunnhilde attempts to save the doomed life of Siegmund and so she willingly disobeys to her father Wotan, who, in retaliation, condemns her to an enchanted sleep; her subsequent love for Siegmund’s son (and her own relative) Siegfried sets another series of (disastrous) events in motion. As far as other operas are concerned, Isolde is not only a desire-struck woman fooled by a magic potion, but she is also a skilled healer who, before the main events of Wagner’s Tristan unfold, nursed Tristan back to health. In Parsifal, Kundry is a dual character  —part repulsive crone, part ravishing maiden and seductress who had been cursed for centuries because, upon seeing Christ on the cross, she laughed at his pains. Now enslaved by Klingsor, she just wishes for death and redemption.

There is hardly a damsel in distress among the female characters of Game of Thrones: Arya, a proficient “water dancer” with a deep hatred for everything pertaining feminine etiquette is set out to avenge her family; Daenerys, after starting off as a timid bride to a savage horselord, eventually leads an Empire across the narrow sea (with three dragons in tow!); Catelyn Stark was the mind behind the majority of her son’s (Robb) main decisions, Brienne of Tarth is perhaps the most skilled swordsfighter in all Westeros and even Sansa, after long periods of abuse endured at King’s Landing and after being introduced to the readers as nothing more than someone well-versed in all feminine arts, is gradually learning how to play the Game of Thrones. Cersei Lannister, by contrast, is a tragic perpetrator of evil who could make Clitemnestra or Lady Macbeth look as harmless as the Sugar Plum Fairy. 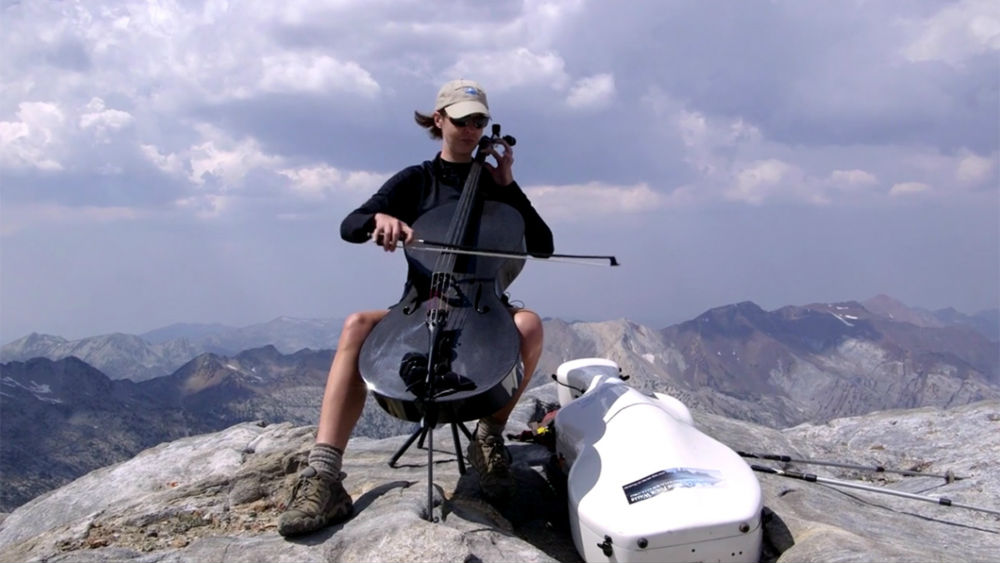 Jordan Smith - Mar 14, 2016
Cellist Ruth Boden wanted to do something with music that “transcends the commonplace,” and so in this video, she puts her cello on her...