Cockatiels are famous for their ability to ‘voice themselves’ by either making loud random noises and whistles or by actually trying to repeat and mimic what certain noises sound like. Cockatiels are in the parrot family and so have the ability to voice themselves louder than any other bird, however their vocal range isn’t as advanced as those of the bigger parrots, so what they do to many people sounds “cute”. This is by far the most adorable thing we have seen in a while!

The Singing Life Of Cockatiels

The cockatiel (Nymphicus hollandicus), also known as the Quarrion and the Weiro, is a member of the cockatoo family endemic to Australia. They are prized as a household pet and companion parrot throughout the world and are relatively easy to breed. As a caged bird, cockatiels are second in popularity only to the budgerigar.

Cockatiels can live for up to and even over 20 years, with some recording life spans of 30 years!! For such a small animal, this is a profoundly long life span, and has added to their appeal and popularity as pets even further.

Cockatiels have amazing control over their vocal chords, which permits them to “say” more than other animals. However, unlike their close family members, cockatiels lack the ability to say complicated and lengthy words, and instead can be taught to whistle on demand.

Cockatiels are pretty intelligent, too – and have been known to mimic other animals, sounds and even people, spitting out a high-pitched, soft voice of what they are trying to repeat. They are also intelligent enough to realize who their owners are, and almost always form very strong bonds with their owners. This can be shown by the cockatiels calling out for their owners – especially if the owners are not around the bird.

Cockatiels are very sociable creatures and so when they are mature enough you can actually let them out around the house, however you will always need a suitable cage for them. The cage is seen as their “house” where they get their food, go the toilet and make friends with the other cockatiels you might have.

Like most animals, cockatiels need time to sleep. This is normally in the form of 10-12 hours at night like most humans. It’s important to get the cockatiel into a rhythm of going to sleep so that you can rely on it not to make a huge noise when you go to bed and its awake still. 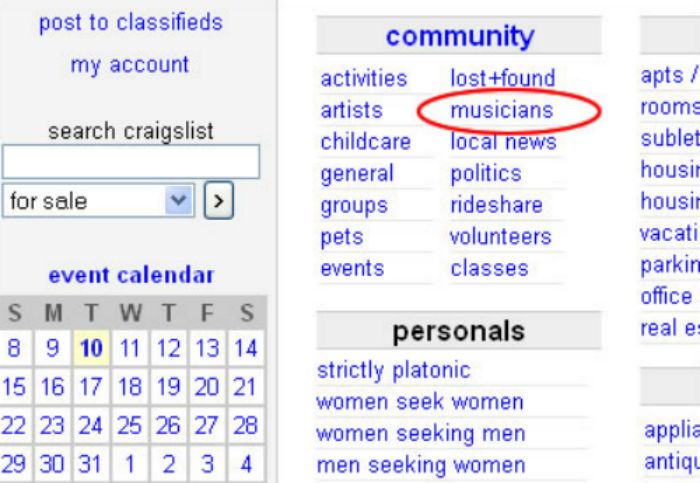 The 18 Weirdest And Funniest Craigslist Ads For Musicians

CMUSE - Mar 28, 2015
You can always count on Craigslist for some highly questionable listings but we all know the free online classifieds site has a reputation for publishing some...

How does Beethoven’s Ode to Joy sound on 7,548 instruments?