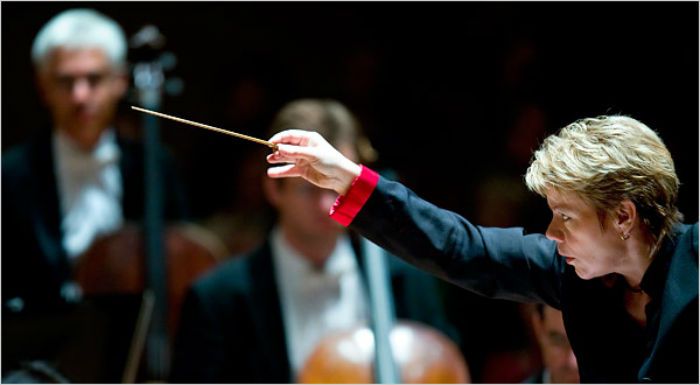 It has only been since the 20th century that women musicians have gained acceptance into the traditionally male symphony orchestras. This hesitancy had a lot to do with factors stemming from long held social attitudes. Once the attitudes began to change, the contribution of women musicians to symphony orchestras has proven invaluable to maintaining high artistic standards.

Prior to the 18th century, women’s contributions to music had been mostly in the areas of writing or performing religious works. The 18th and 19th centuries saw an increasing number of women musicians as singers, instrumentalists, and composers. Two names from the 19th century stand out as particularly well-recognized: Jenny Lind, singer, and Clara Schumann, pianist and composer. Schumann, as a pianist, earned a steady income through concert tours which often included her own compositions.

In America, women’s participation in music was primarily reserved for the home as a social skill. It became part of a well-bred young lady’s education during the 19th century with lessons in keyboard instruments, harp, guitar and singing. Some also studied violin. Society expected women to be proficient in music without performing it publicly. Professional women musicians from Europe gave concerts in America. By the second half of the 19th century, music teachers and conservatories were training young women interested in pursuing music on a professional level.

Women began forming their own orchestras. Mary Wurm, a former student of Clara Schumann, founded a women’s orchestra in 1898 in Berlin, and served as the conductor. Professional women’s orchestras provided performance opportunities for women in Europe and America. It was not until 1913 that women were first hired to perform alongside men in a major orchestra.

Sir Henry Wood had been the conductor of the Queen’s Hall Orchestra in London since 1895. In 1913, he hired six women violinists. By 1918, the orchestra had 14 women members. Wood’s quote about the appropriate instruments for women musicians matched the overall perception on both sides of the Atlantic. “I do not like ladies playing the trombone or double bass, but they can play the violin, and they do.”

Edna Phillips (1907-2003), harpist, was the first woman hired for a principal position by a major American symphony orchestra. In 1930, the Philadelphia Orchestra had an opening for a harpist. Phillips auditioned and was selected by the conductor, Leopold Stokowski. The previous year, Sergei Rachmaninoff described the Philadelphia Orchestra as “the finest orchestra the world has ever heard.” It ranked on the same level as the New York Philharmonic, Boston Symphony and Chicago Symphony.

Despite Phillips’ professionalism, she encountered resentment from some of the male musicians who felt she was in the way and an unwelcome presence. Not only was she a woman but she had been hired to fill the vacancy left by a male harpist who was well-liked and had been with the orchestra for 17 years. In addition to her position with the orchestra, she also taught at the Philadelphia Conservatory of Music. She and her husband commissioned several works for harp by prominent composers such as Alberto Ginastera and Norman Dello Joio.

The Vienna Philharmonic, founded in 1842, did not allow women as full members until 1997.  Anna Lelkes, a harpist, became the first woman member that same year. Prior to that, she was a regular but unofficial part of the orchestra. Her name was never listed on the program. She was paid but not publicly acknowledged. Some of the male members voiced concerns that admitting women to the ranks would lower the musical standards. When the vote was taken, even though the outcome was not unanimous, it favored accepting women.

Women conductors are also gaining acceptance. Australian-born Simone Young was the first guest conductor of the Vienna Philharmonic in 2005. She had previously conducted the Vienna State Opera in 1993 and has a distinguished record that includes major opera houses and orchestras throughout the world.

Another first for Alsop was in 2013 when she was the first woman to conduct the Last Night of the Proms. The formal name is The Henry Wood Promenade Concerts presented by the BBC, which are classical music concerts held daily for eight weeks. The name of Henry Wood refers to the same conductor who first allowed women in the Queen’s Hall Orchestra in 1913.

The contribution of women musicians to symphony orchestras has been extensive. It has not, however, always been easy. The women in this article are examples of those who have overcome barriers in the path of professional achievement.