Glazunov is not a name we readily hear these days in the concert halls and on radio broadcasts. He was a composer who was very much in favour in the last years of 19th Century Russia and was taught by the great Rimsky-Korsakof.

Glazunov was born in St Petersburg, Russia in 1865 and died in Paris in 1936. His impressive catalogue of works includes piano and violin concertos, eight symphonies, incidental music and works for the ballet. Glazunov wrote a substantial amount of chamber music that is perhaps more popular now than his symphonic works.

Glazunov carries on the work of Tchaikovsky, rejecting the more modern approach of fellow Russians, Prokofiev and Stravinsky. The Seasons is no exception and it feels closely linked to the ballets of Tchaikovsky. It was composed for the Russian Imperial Ballet and received its premiere in St Petersburg in the early months of 1900.

The Ballet is really a continuous musical tapestry of the seasons that begins with an icy winter; flower fairies in spring, the warm glow of the sun accompanied by the Satyrs pipes in Summer and the autumnal dance. The final coda is titled The Sable sky and depicts the twinkling stars in the canopy above.

Bax, born in London in 1883, is often considered to be one of the last neo-romantic British composers alongside Finzi and Elgar. His work encapsulates the romantic ideals so prevalent in much of the Celtic poetry he admired and the works of WB Yeats.

Bax studied at the Royal Academy of Music and was reportedly a brilliant pianist. From 1942-53 he was the Master of the Queen’s Music. His catalogue of works includes some wonderful chamber music alongside seven richly rewarding symphonies.

November Woods was composed in 1917, at a very troubled time in European history as war raged across the continent. The piece is a tone-poem that not only aims to capture the feelings of a dark and stormy autumnal wood but an expression of the composers own lamentation at the passing of happier times. November Woods is a strongly evocative and reflective orchestral piece that fluently shows Bax to be a consummate orchestrator and highly expressive composer.

3. The Seasons by Joseph Haydn

Haydn’s oratorio title The Creation had enjoyed immense success both in his home country of Austria and in London. Encouraged by this, Haydn was urged to consider composing another work along similar lines. He was presented the lengthy poem of the same title by James Thomson and duly set to work with the assistance of his lifelong friend and collaborator on the Creation, van Swieten.

Swieten’s advice to set this text was not to prove as sound as their previous work together and the composition of The Seasons took its toll on the ageing composer. Although the premiere of the oratorio in Austria was met with positivity the same could not be said for its reception in England where critics felt Haydn’s depiction of the seasons was somewhat old-fashioned.

The Seasons falls as you might expect into four sections as follows: Spring, Summer, Autumn and Winter. Autumn conjures the images of the hunt and of hard work for the peasant community and concludes with something the Austrians accomplish well; a drinking chorus.

4. Folk Songs of the Four Seasons by Ralph Vaughn-Williams

Vaugh-Williams was one of the most formidable English composers of his time. His symphonic works stand amongst the greatest of his achievements but so does his love of the English folk traditions and its music. These songs were composed in 1950 for a choir of Women’s voices only and come under the heading of a cantata.

A Cantata is like a short oratorio but in this case, based only on secular themes. The folk-songs Vaughn-Williams carefully selected from his own extensive collection to form this cantata. He had devoted considerable time between 1904 and 1010 gathering and collating folk song.

Each season takes its turn feature in the composition following a brief prelude, and each employs a different set of folk-songs that are adapted, developed and beautifully arranged for the women’s choir. Vaughn-Williams enjoyed composing for amateur musicians and exploited the talents of these singers by dividing them into three groupings, the most technically able being given the unaccompanied sections.

Autumn is the third part of the piece and contains the following songs; John Barleycorn, The Unquiet Grave and An Acre of Land. These are scored for Full chorus and semi-chorus; three unaccompanied voices and all voices respectively. The work is unmistakably Vaughn-Williams with its abundance of colours and velvety textures.

5. L’autunno (Autumn) from The Four Seasons by Antonio Vivaldi

The Four Season, composed by Vivaldi somewhere between 1720 and 1723 whilst working at the L’Ospedale della Pietà in Venice. They were published later in Amsterdam and have been at the top of the list of popular Baroque works for decades.

Whilst in Venice, Vivaldi taught some extremely talented young ladies how to sing, compose and play the violin. It is clear from the quality and difficulty of this music just how able these students were. These four violin concertos, titles the Four Seasons each vividly depicts the feelings attributed to each season.

Vivaldi’s skill as a composer and violinist shows through in these concertos. Every subtle nuance of the seasons fills the musical canvas. Autumn is the third concerto and like the others, comprises of three movements. These are Allegro; Adagio molto and Allegro, a fast-slow pattern favoured by the composer. Vivaldi is reported to have aligned a sonnet with each of the concertos movements.

The first is a celebration of the peasants; the second all cares are forgotten, and the third is the hunt. Like Beethoven’s Pastoral Symphony, Vivaldi chose the warm key of F major in which to compose for autumn. The colours of the falling leaves and the ever closer chill of winter are eloquently depicted. 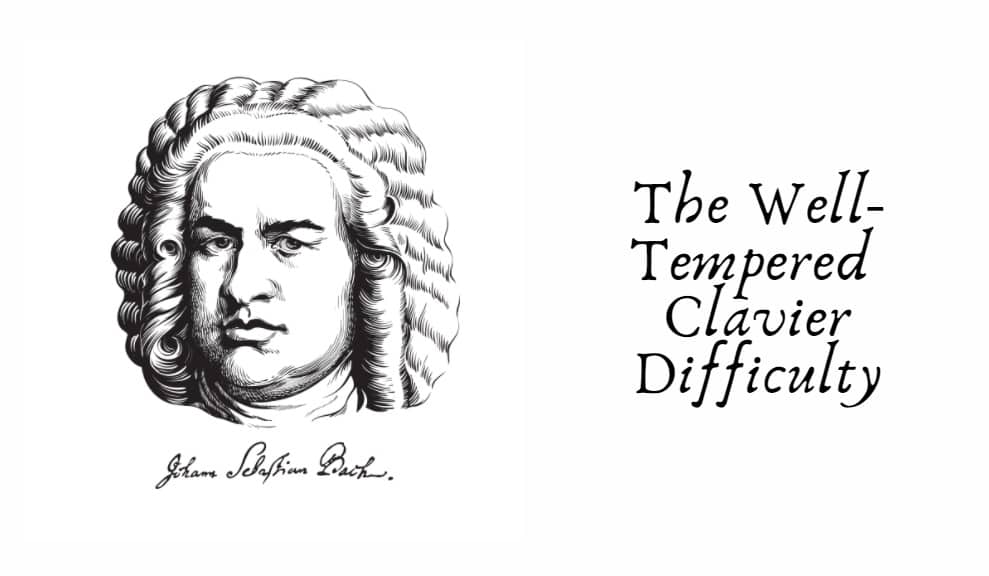 How Challenging Is The Well-Tempered Clavier Difficulty?

Dr Justin Wildridge - Jan 20, 2021
Arguably this collection of 48 Preludes and Fugues is one of the best known, respected, and performed selections of pieces composed by JS Bach....