You absolutely don’t have to be a luthier to know that a classical guitar is a whole different type of instrument from an electric guitar. That much is painfully obvious right from the start. We are going to compare these two types of guitars because they represent different ends of a single spectrum.

Classical guitar vs electric guitar is not a matter of which one’s better. No, rather it has to do with which one serves your needs better. Sure, that might come across as fairly simplistic so we are going to dig a bit deeper into this topic.

Before we go any further, we’ll do our due diligence and cover the basics for you. The classical guitar is an old instrument. We are talking 16th century kind of old. Truth be told, modern classical guitars are different from those early models, but the core of the instrument has pretty much stayed the same.

The entire thing comes down to the resonator box, a wide neck and nylon strings. Your standard classical guitar won’t be too loud. Instead, it will have a very mellow, balanced tone that suits various genres of traditional and classical music.

The electric guitar on the other end is a whole different type of beast. This is a very modern instrument that has been around for 70 years in one shape or another. It has no resonator abilities and needs amplification to produce sound. However, electric guitars are much more versatile in many ways than their classical counterparts. More on that a bit later.

One question that every beginner has to answer is, ‘which guitar should I get as my first one?’ This is where we run into what many call the ‘old school way’ of learning how to play guitar.

In other words, the effect is similar to learning how to drive on a 30-year-old stick shift beater and then jumping into a brand new car. The real question is whether or not this advice is relevant anymore. We’re leaning towards a no simply because electrics are everywhere nowadays and quite affordable.

The Flexibility of an Electric Guitar

When you drop money on a classical guitar, you are getting exactly what you’ve paid for. Nothing more and nothing less. That is perfectly fine if you are a classical guitarist who is all about that genre of music in general. However, if you want flexibility, various upgrade paths, and creative freedom, the electric guitar is where it’s at.

When you go out and get an electric guitar, you are basically tapping into a world of endless possibilities. That guitar is just a single piece of the puzzle – an interface you use to access different sounds, options, and features. Not only can you get one amp that offers a certain sound, but you can get a whole different one that brings a new type of sound. But wait, there’s more. The flavors get only more intriguing when you add effects pedals to the mix. These can take you down the rabbit hole of sound.

At the end of the day, even the cheapest electric guitar will give you a wide set of options to work with.

The Traditional Sound of a Classical Guitar

Here’s where these two worlds collide. An electric guitar in all of its glory can’t do anything for you if you are a classical guitarist. As far as you are concerned, that electric guitar is about as useful as a tire iron. Much like other classical instruments, a good classical guitar is a masterpiece. It is usually an instrument that a person somewhere has designed, chose the adequate materials and spent time to put everything together by hand.

As such, a high-end custom classical guitar has a tone of its own that is unique enough but still very usable. It has a character of its own. With all due respect to all of the top tier electric guitar builders out there, a luthier who specializes in classical guitars is just on a different level of excellence.

Which One To Get?

This is not the question you should be asking yourself. It’s not a matter of which one to get, but which one to get first. There is a huge difference there. Being a guitar player means that you appreciate the instrument for what it is and understand that each guitar has its own worth.

It is very common for guitar players to own numerous guitars, some of which can be acoustic, some electric and some classical. The more you play and evolve as a player, the more you start to respect different music genres, guitar types, and even materials.

With all that said, your first guitar should be the one that excites you. That guitar should keep you coming back and wanting to learn more, get better and advance as a guitar player. Whether that is a classical guitar or an electric one is completely up to you. Different people have different tastes. Go with what makes you happy.

Comparing a classical guitar to an electric one is pretty hard. Aside from the overall similar shape and elements, these two instruments have very little in common. However, it is good to know where it all started and be able to compare that to where we are today.

Being able to appreciate the whole spectrum starting from one extreme and ending with the other makes you a better guitar player. We strongly suggest that you spend some time with both. Who knows, maybe you’ll find your perfect match. 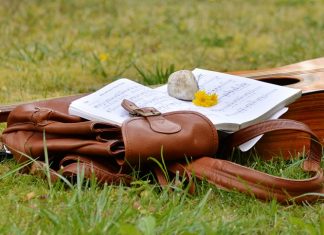 Laura Buckler - Sep 7, 2017
The most important player in the songwriting industry is the songwriter, and everyone knows this. The songwriter is the person who writes the song...