Chris Carrabba, like many popular frontmen, has traversed a gambit of trending and popular cultures. From punk to Emo and recently with an upbeat folk style, Carrabba’s Twin Forks continues to showcase his many sides of songwriting and musical depth. Carrabba’s first rodeo was with Christian punk act Further Seems Forever, as their original lead singer and guitarist. While serving as the lead for Further, Chris spent his daylight hours as a special education teacher.

From a series of personal experiences, he would go on to leave the punk act after finding musical success with a side project called Dashboard Confessional. Dashboard’s acoustic-punk sound would make the band one of the most popular acts amongst teenage Emo fans, and put the group on the map as the premier Emo band. The side-project had national attention, with a growing fan base and singles featured in hit films like Spiderman 2, and the popular TV series Scrubs.

Seeking to write and perform music apart for the Emo and punk styles that he’d spent so much time in, Carrabba formed a new band in 2011 which would center around roots music and folk. Twin Forks would also include more bandmates (7 in all). Their initial self-titled EP (in 2013) was instantly praised by Billboard and Alternative Press. Their latest full length album is also self-titled, with 12 tracks including standouts like Kiss Me Darling, Plans, Back To You and Who’s Looking Out. 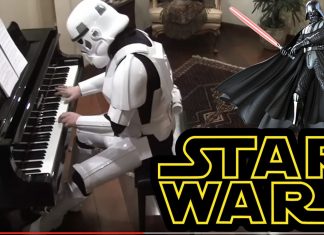 CMUSE - Oct 1, 2017
You understand it right. That’s exactly what this stormtrooper has done—coming up with an inspiring relaxation method that simply involves playing John William’s Imperial...