To be completely clear from the outset of this article, the term ‘folk music’ covers an immensely broad and diverse selection of music from across the world. Quite frequently this term is used to describe music that is created by indigenous people in any country you can think of. This, for example, can include, Balinese Gamelan music, Japanese ‘Gagaku’, Irish, English or Scottish folk music, to cite only a small fraction of the collection of music available to consider. Each of these types of folk music holds a host of treasures for the listener and the performer alike and is very worthy of a more comprehensive exploration than this article can provide.

There are underlying characteristics, embedded in folk music from which we can draw a subtle commonality. One of the more obvious features of folk music is the range of instruments used and that they very often define the sound that is typical for that kind of music. Many of these instruments are not used in many other contexts other than to play the music from that country and many of which will not be remotely familiar. There is a whole area of academic study called ‘Ethnomusicology’ that is devoted to the exploration of this kind of music.

If we track back to Irish folk music, then we can already find a collection of instruments that truly characterize music from that culturally rich country. Take for example the ‘uilleann pipes’ that date from the early part of the 18th Century and are notoriously difficult to master. They are an instrument that is used in instrumental music titled ‘Fonn Mall’ and has a sound that closely resembles the bagpipes.

Alongside the pipes instruments like the banjo, the bodhran drum, and the fiddle bring a unique and compelling set of timbres to Irish folk music. Similar instruments to these parallel in other folk music including that of the Scandinavian countries, England, Wales and Scotland. This may be as a result of instruments that developed through trade between these countries and almost certainly through the influence of the medieval traveling musicians.

Looking further afield, the traditional music of Japan includes two main categories. The first is considered to be theatrical music called ‘Noh’ and ‘Kabuki’; the second is ‘Gagaku’ that is a more formal courtly music. Similar to the music of Ireland, the instruments that are used to perform Japanese folk music fall into categories such as ‘wind’, ‘percussion’, and ‘string’. The percussion instruments come in a huge variety of different kinds from the ‘Kakko’ (a small hand drum), through to the more familiar ‘Taiko’ drum that has dominated much film music of the last decade. The ‘Koto’ (a zither type instrument), is a characteristic sound of the music of Japan alongside the highly expressive and evocative transverse flute called the ‘Shakuhachi’.

Many other musical comparisons can be drawn between these numerous types of folk music. Many of the musical forms orientate around both song and instrumental music. This makes the structure of many pieces of folk music relatively simple when compared to complexities that exist in classical music. That is not to say that folk music is in some manner of a lesser value, but that the focus of the music is entirely different without the need for more complex or extended structures.

Many folk songs are narrative-based and can be described broadly as being ‘through-composed’ with a form that is dictated by the words. Other common forms include a binary or AB form and ternary form where the A section returns often as a variation. Some significantly more complex structures are used in Indian traditional music. These are based on an agreed set of rhythms or ‘talas’ that broadly fall under the music called Raga and illustrates a further level of structural ingenuity.

Improvising is a very natural form of musical expression and exploration that fits seamlessly into folk music from every corner of the world. It brings certain freedom to the musicians and vitality to the performance that has the potential to flow in unexpected ways. Not all of the improvisations you will hear involve extended or extensive solos but could be a subtle melodic or rhythmic variation that is the musical signature of that player or singer.

The melodies in many folk songs are from an age before the establishment of the present system of tonality. Whilst some European and Scandinavian folk songs are in particular keys, many can be thought of as being based around ‘modes’ or in some cases ‘pentatonic’ scales. A familiar song that is sung to welcome in the New Year in England is the Scottish tune called ‘Auld Lang Syne’ which serves as a fine example of a pentatonic melody. You can listen to a large number of traditional folk songs and discover that the modal harmony is strongly weighted towards the Aeolian and Dorian scales.

The range of many of the melodies, like those in ‘Auld Lang Syne’, or ‘Scarborough Fair’, is often around no greater interval than an octave.

This is often reflected in the instrumental pieces too as both instrumental and vocal ranges can be limited. The majority of folk music pieces are not intended for professional players to perform, but for amateur musicians who may not have the technical skills of professional players. That said, there are many outstanding performances from groups who are professional musicians who have taken on the traditional mantel of folk. It remains a hugely popular musical genre with a healthy following throughout many European countries.

For further information and some interesting listening try out the following links: 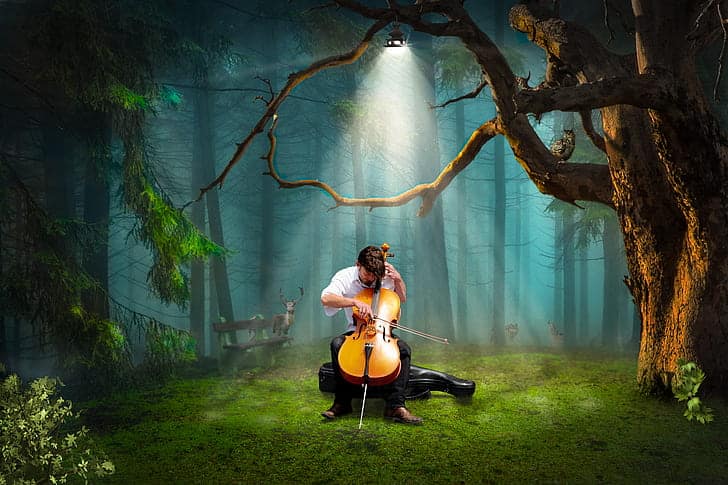 Who Was the First Documented Conductor?