Research suggests that babies brought up bilingual find it easier to pick up different musical notes than their monolingual counterparts.

The study compared babies brought up in a bilingual and monolingual environment aged 8-9 months. They were tested on how well they could distinguish between two violin notes and the results showed that bilingual babies could discern the difference more accurately.

Previous research confirmed that children learning more than one language are more sensitive to the change in pitch of speech, but this research indicates that this skill is transferrable to non-linguistic sounds like music.

It is only one of a number of benefits bilingual children experience. Researcher Liquan Liu noted in an article that these include a stronger ability to identify and detect new information, a higher degree of brain plasticity when experiencing a non-native language, greater sensitivity to visual cues in language and better working memory capacity.

The article also challenges the long-standing myth that raising children bilingually will delay their linguistic development. Research does not back this up but rather shows that bilingual and monolingual children progress with their language skills at roughly the same pace. More information on this, including references to research, is available here. 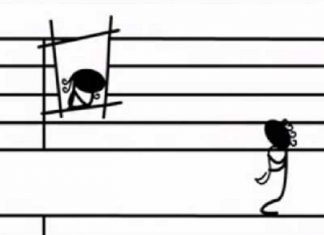 Angelica Frey - Apr 20, 2015
In a video that looks just like a segment of Disney’s Silly Symphonies or Fantasia, artist Simon Brethé animates the pentagram, making the notes...