We all liked the romantic, longing and vaguely haunting tone of the first movement of Beethoven’s Moonlight Sonata, which actually owns its name to a remark by music critic Ludwig Rellstab. Rellstab, in fact, compared the effect of the first movement to the shimmers of moonlight on the surface of Lake Lucerne. For composer Hector Berlioz, the melody of the first movement, which he defined as a  lamentation,  “is one of those poems that human languages does not know how to qualify,” while Beethoven’s student Carl Czerny envisioned it as a “nocturnal scene in which a mournful ghostly voice” sounds from the distance.”

By performing the first movement on the Sonata on a harp guitar, musician Brin Addison gave the piece a more wistful and, to some extent, more sensual interpretation — the same way Schubert’s Ständchen sounds “sexier” in its arrangement for guitar.

The harp guitar comes with the first six strings tuned like a regular classical guitar, while the nine sub-bass strings are  tuned chromatically, usually from D# down to G. Addison, however, tuned them differently.  “I chose to tune them as follows: 7D, 8C, 9B, 10A, 11G#, 12G, 13F#, 14F, 15E, which I find more useful as it allows me to play down to an octave below the 6E of the regular fretted neck,” he wrote. What’s more, by his own admission, the sub bass strings actually brought his rendition closer to the original. “Classical guitar has very little sustain, something which is needed in this sonata,” he wrote, “however the bass notes sustain quite well which adds to the effect of playing piano without dampers.” 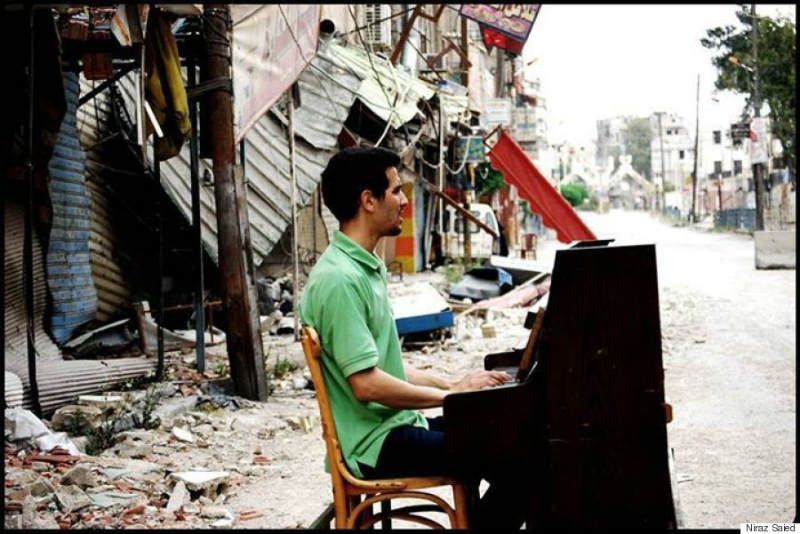 Jordan Smith - May 25, 2015
As the civil war in Syria rages on, a 27-year-old pianist has begun to draw attention for his determination to bring music to a...