The iconic setting of San Francisco, including the Golden Gate Bridge, is the location for this video to accompany Bach’s cello suite no. 3 in C major. The video features the gigue from the latter part of the suite, played by cellist Nathan Chan.

Chan was a child prodigy who has studied at the Juilliard School in New York and performed with a number of orchestras and other ensembles around the world. Incredibly, according to his website, he made his conducting debut at age three after he caught the attention of the San Francisco Symphony Orchestra for his remarkable ability to mimic the movements of a conductor. His first appearance was with the San Jose chamber orchestra. He began formal training at five, and graduated from Columbia University.

Chan collaborated on this video with Shearwater Films, and it is only part of a video project they are hoping to be able to work on. There is more information about it on the Shearwater website.

On top of his achievements in classical music, Chan has also been involved in some crossover work. Here, for example, in one of the more popular videos on his Youtube channel, he performs a recognisable pop tune from the 1980s alongside fellow cellist Stephanie Tsai.

You can hear some more samples of Chan’s playing here. 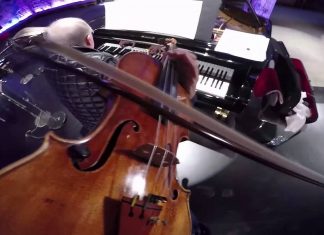 Violinist Anne-Sophie Mutter films her performance with a GoPro Camera

Angelica Frey - Jun 27, 2015
Yellow Lounge is a series of events that proposes a winning combination, associating Classical Music with clubbing, and tries to introduce a younger audience...