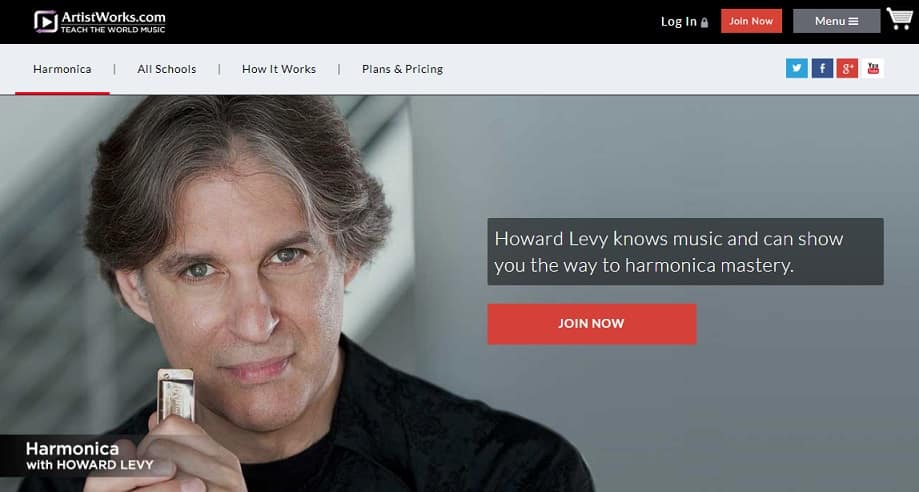 Music is a huge part of ours and most any of the many cultures all around the globe. While the specific types of music will vary widely depending on where you live, but the love of music is universal in nature. This is what basically drives people to want to learn how to play an instrument themselves and getting together with other people who share the same love for making music.

However, not everyone can be a musical prodigy and be able to simply pick up any instrument and begin playing it like a pro. The desire to be able to play an instrument sometimes is the easy part, it becomes a bit of drag when finding out what lessons can be expensive and you may not be able to find the time to go to someone’s studio or home for one on one lessons.

If you are looking to take up the harmonica but you know that you do not have the time to be able to go anywhere to take lessons and the cost would also make it a bit difficult to get started. One alternative is to use a relatively new concept; online harmonica lessons. This article is designed to introduce you to a man named Howard Levy and talk about his online harmonica lesson offerings.

Who is Howard Levy

Howard Levy is more than just a harmonica player, he is considered what is called a master harmonica player and he was recognized as the first person to play a diatonic harmonica as a chromatic instrument.

Along with living performances all over the world, he is also an accomplished recording artist. He has won numerous awards for his harmonica playing on albums and numerous movie scores. He was part of a musical group called Bela Fleck and the Flecktones with them he won a Grammy Award.

He also played in a number of other groups where he wrote numerous songs and collaborated with a number of other artists. Along with his music career, he also found time to teach individuals who were interested in learning how to play the harmonica.

He began his career teaching the harmonica back in 1972 and during that time he has personally taught thousands of people to play the instrument. As a master harmonica player with a unique grasp of getting the most sounds out of his favorite instrument, he is able to help those people who really want to get to know the harmonica.

His 100’s of video lessons cover four different levels; basic, intermediate, advanced and virtuoso. In addition, there is access to the ArtistWorks Video Exchange® learning platform which Levy will record responses to the student submission that includes critique, tips, and suggestions based on the video.

Over the years Howard Levy has added numerous genres of music to his repertoire including Jazz, classical, Blues, Folk, Irish, Bluegrass, Latin/Brazilian, Rock/Pop, Indian/Middle Eastern/Eastern European. With such an extensive background in music styles, it is highly likely that you will be able to find a style that fits in with your favorite music.

Each one of the three membership levels; 3-month, 6-month, and 12-month subscription. Each of the three levels offers member benefits and the 6 and 12 months are slightly cheaper per month. As a paid member you will have full access to all of Howard Levy’s harmonica lessons on video. You will be able to view them on any of your devices that have an Internet connection. The three levels give special extra benefits as follows:

His talents allow him to play across many different genres including jazz, classical, latin and some others. Along with performing, he also put in time recording video lessons so that he can share his love and knowledge for everything harmonica. The Artistworks.com platform is the perfect way for Howard to reach the largest number of people who are looking for an alternative to the traditional offline teaching method.

Working with Artistworks.com gives him a much wider audience and access to many more people who are looking help learning how to play the harmonica. By joining the site and becoming a paid member you will immediately have access to the hundreds of lessons on video. This means you can learn at your own pace and rewatch different parts of the lesson in order to be able to pick up something you may have missed.

Howard Levy has helped thousands of people learn to play the harmonica since 1972 and he has been part of the Artistworks.com network of teachers since 2009. If you are looking for a really good instructor and want to save yourself some money you should really look into Artistworks.com and Howard Levy.