The well known Viennese composer Allan Berg (1885 – 1935) is remembered for helping to introduce a new wave of compositional styles and techniques during the 20th century. Alongside other phenomenal composers of that time including his teacher Arnold Schoenberg and fellow colleague and revered composer Anton von Webern, the three formed the Second Viennese School of music.

His techniques and compositional strategies have been influential and in many ways indispensable to many composers that have come after him. Before he became famous, very little was known about Alban Berg but the success of his first opera Wozzeck is what catapulted him to fame. Today, he is recognized widely as a classic figure in the history and growth of classical music. His oeuvre, which consists of world famous classics, is performed and are recorded regularly and are enjoyed by public audiences everywhere.

Alban Berg was born in Vienna on February 9 to a fairly well to do family. Berg’s father worked as an export salesman while his mother was the daughter of a well-known court jeweler. Berg and his three siblings Hermann, Karl, and Smargarda grew up comfortably and in an artistic environment.

By the time he had turned 14, Berg had demonstrated a strong desire to pursue music having composed several songs already. Because of his passion for music, he often neglected his other studies because he preferred to study music. It was Berg’s brother that took Alban’s earlier compositions to Schoenberg who then invited Berg to become one of his pupils.

2. The second Viennese school of music

Alban Berg is said to belong to the second Viennese school alongside other composers such as Arnold Schoenberg and Anton Webern. The first Viennese school consisted of the classical composers of the 18th century such as Mozart and Beethoven that had come before Berg wrote and were responsible for creating important works in Vienna and setting the stage for the composers that were to follow.

The second Viennese school was quite controversial in the 20th century because composers such as Alban Berg expanded sounds by getting rid of the huge and rich orchestral forces that were popular as the 20th century was winding down (during the late Romantic Period), and stripping back.

Schoenberg was Berg’s first teacher. At first, he taught Alban for free but later charged Berg a modest fee to keep training him. Berg followed and emulated a lot of Schoenberg’s concepts at the beginning of his career but later on learned how to develop a distinctly personal style within the framework of the 12 tone method that was unique and different from other composers of the second Viennese school. Berg’s innovative approach is what helped to prepare audiences to accept even more multifaceted and compound contemporary technical styles.

In 1907, Berg met Helene Nahowska who was an aspiring opera singer at that time and the two fell madly in love. On May 1911, they got married despite fierce opposition from her father. They took up residence in a small suburb of Vienna known as Hietzing, which is where Berg composed some of his first successful works that included a Piano Sonata, Op. 1; String Quartet, Op. 3 and many more early works.

5. Suffered from depression and suicidal thoughts

Berg underwent a tough period of his life after his father passed away unexpectedly from a sudden heart attack. After his death, his adolescent life was often characterized by ill health, financial difficulties, instances of failure at school and emotional anxiety. During this tough period, Berg had also impregnated a girl out of wedlock known as known as Albine Scheuchl, at a time when this was considered taboo. Shortly after this was discovered, Berg attempted suicide but managed to recover from his personal problems thanks to his music.

6. His music was rejected at first

At the start of his career, Berg’s music struggled to take off commercially. Berg had a lot of trouble getting people to commission public performances from him so his mentor Schoenberg arranged for a concert that ended up having a particularly damaging effect on his self-esteem. During the concert that was sponsored by the Akademischer Verband fur Literatur und Musik in Vienna which took place on March 1913, audiences booed his performance in the middle, the police were summoned and his performance had to be canceled before it could end.

Like almost all young men at the time, Berg was very patriotic and signed up to join the Austrian military at the start of the First World War. He joined to fight for the Hapsburg Monarchy but he would soon regret the decision. His lack of enthusiasm for the army is observable in his opera Wozzeck, which is what is most remembered for today.

In 1922, Berg completed Wozzeck and publicized it with his own money. He was not immediately asked to publish it but the originality of his work finally started to uplift his reputation as a composer. When Wozzeck was first performed in Berlin on 14th December 1925, it was such a huge success that it established and consolidated Berg’s reputation as a composer to watch out for.

Hanna Fuchs-Robettin was married to Herbert Fuchs-Robettin, and later on the mistress of Alban Berg. The two met when Berg was visiting Prague in 1925. They fell for each other very quickly, which even inspired Berg to dedicate his Lyric Suite to her and their forbidden love. By the time of their meeting, Berg had been happily married to Helene for close to 14 years, but he was said to be prone to infidelity over the course of five days, Hanna and Berg embarked on a scorching affair that started in the house that Hanna shared with her longtime husband.

Berg’s later years were hard on him as he dealt with poverty because the Nazi government made it very hard for him to perform publicly. The type of music that he composed at that time was not very appreciated by the government, making it even harder to make money. Eventually, Berg suffered from a series of heart attacks and he passed away on December 24th, 1935. 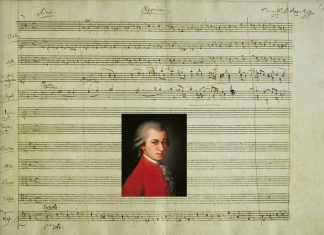 Find out how you can join an orchestra without playing a...

Guitar Music: Will It Become Obsolete?